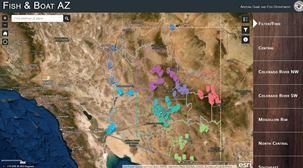 The adventurous Arizona angler, boater or paddler now has a tackle-box tool that can unlock about any fishing excursion in the state.With destinations ranging from high-elevation lakes in pine forests to waters in grasslands and desert areas, how does someone decide where to go? The new edition of the Fish & Boat AZ map is now available for anglers to choose their own hook-and-line adventure.  Read more.

The Arizona Game and Fish Commission on June 21 voted 4-0 to approve a Notice of Final Rulemaking that, if approved by the Governor’s Regulatory Review Council (GRRC), would designate a predator or fur-bearing hunt contest, as defined by the rule, an unlawful manner and method of take for these species. The Commission’s intent in adopting this rule is to address social concerns over formally organized and publicized contests that award prizes to competitors that kill the largest number or variety of predators or fur-bearing animals, as these are the types of events that have caused the strongest public objection.  Read more.

After a graceful half-mile flight across Horseshoe Lake, a 3-year-old bald eagle released back into the wild by the Arizona Game and Fish Department and Liberty Wildlife was free once again. It was a fitting conclusion for the bird that was found in February at a Queen Creek dairy suffering from a shattered femur. Left untreated the bird would have certainly died, yet four months later, a small group of onlookers watched in excitement as this national symbol glided low across the water’s surface, declaring its independence just days ahead of the July 4 holiday.   Read more.

Pinal County now has a new ally in the battle against mosquito-borne diseases this summer: endangered Gila topminnow. The Arizona Game and Fish Department provided 100-200 of the native fish to the Pinal County Public Health Services District on Friday, June 21, to be held for natural propagation, and later to be stocked into standing urban waters throughout the county.  Read more.

Twelve Mexican wolf pups are now being cared for and raised by surrogate wild wolf parents after successful efforts to introduce them into existing wolf litters in Arizona and New Mexico. The young wolves were placed in their foster dens by scientists from the Mexican Wolf Species Survival Plan group and Interagency Field Team (IFT). The cross-fostering is part of an effort to restore the rare gray wolf subspecies to its former range and increase genetic diversity in the wild population.  Read more.

The Arizona Game and Fish Department will mark the 10th anniversary of an innovative partnership with sportsmen’s/conservation organizations working to reverse a long-term decline in hunting participation.The Hunting and Angling Heritage Workgroup (HAHWG) and the Outdoor Skills Network (OSN) is a unique collaboration of more than 60 organizations that has hosted nearly 500 public events geared toward the recruitment, retention and reactivation (R3) of hunters and anglers since 2009. In fact, Arizona’s R3 program is the largest in the nation.   Read more.