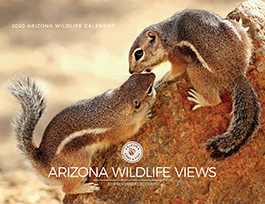 PHOENIX — The Arizona Game and Fish Department is excited to announce the winners of the 2019 wildlife photo contest.