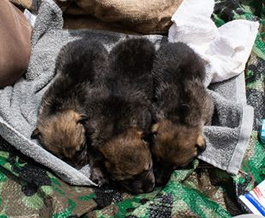 “We have documented survival in four out of the seven packs that received cross-fostered pups this year — and there could still be more. This is an extraordinary accomplishment by our field team,” said John Oakleaf, Mexican Wolf Field Projects Coordinator for the U.S. Fish and Wildlife Service. “The Service would once again like to thank the staff from the captive facilities, LightHawk, and the Interagency Field Team who continue to do incredible and visionary conservation work for the Mexican wolf.”

AZGFD in the News: To protect native fish, agencies put a bounty on brown trout in the Colorado River

Kudos to The Arizona Republic and reporter Anton L. Delgado for a recent article about a pilot program that incentivizes the harvest of brown trout in the Colorado River. The objective is to keep the predatory brown trout from moving downstream and endangering native fish like the humpback chub. 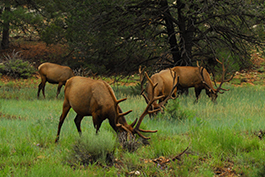 LARAMIE, Wyo. — For the first time, state and federal wildlife biologists have come together to map the migrations of ungulates — hooved mammals such as mule deer, elk, pronghorn, moose and bison — across America’s West.

“This new detailed assessment of migration routes, timing and interaction of individual animals and herds has given us an insightful view of the critical factors necessary for protecting wildlife and our citizens,” said Jim Reilly, director of the U.S. Geological Survey (USGS).

“I’m really proud of the team that worked across multiple agencies to transform millions of GPS locations into standardized migration maps,” said Matt Kauffman, lead author of the report and director of the USGS Wyoming Cooperative Fish and Wildlife Research Unit. “Many ungulate herds have been following the same paths across western landscapes since before the United States existed, so these maps are long overdue.”

The migration mapping effort was facilitated by Department of the Interior Secretary’s Order 3362, which has brought greater focus to the need to manage and conserve ungulate  migrations in the West. It builds on more than two decades of wildlife research enhanced by a technological revolution in GPS tracking collars. The research shows ungulates need to migrate in order to access the best food, which in the warmer months is in the mountains. They then need to retreat seasonally to lower elevations to escape the deep winter snow.

Ungulate migrations have grown more difficult as expanding human populations alter habitats and constrain the ability of migrating animals to find the best forage. The herds must now contend with the increasing footprint of fences, roads, subdivisions, energy production and mineral development. Additionally, an increased frequency of droughts due to climate change has reduced the duration of the typical springtime foraging bonanza.

Fortunately, maps of migration habitat, seasonal ranges and stopovers are leading to better conservation of ungulate herds in the face of all these changes. Detailed maps can help identify key infrastructure that affect migration patterns and allow conservation officials to work with private landowners to protect vital habitats and maintain the functionality of corridors.

The migration maps also help researchers monitor and limit the spread of contagious diseases, such as chronic wasting disease, which are becoming more prevalent in wild North American cervid populations such as deer, elk and moose.

“Arizona is excited to be part of this effort,” said Jim deVos, assistant director for wildlife management for the Arizona Game and Fish Department. “This collaboration has allowed us to apply cutting-edge mapping techniques to decades of Arizona’s GPS tracking data and to make those maps available to guide conservation of elk, mule deer and pronghorn habitat.”

Many of these mapping and conservation techniques were pioneered in Wyoming. Faced with rapidly expanding oil and gas development, for more than a decade the Wyoming Game and Fish Department and the USGS Cooperative Research Unit at the University of Wyoming have worked together to map corridors to assure the continued movements of migratory herds on federal lands.

Migration studies have also reached the Wind River Indian Reservation, where researchers are collaborating with the Eastern Shoshone and Northern Arapaho Fish and Game to track mule deer and elk migrations and doing outreach to tribal youth. Reilly said the interactions with state agencies and the tribes, especially with the Wind River students, have been a hallmark of this effort and have been remarkably successful.

For example, the mapping and official designation of Wyoming’s 150-mile Red Desert as part of the Hoback mule deer migration corridor enabled science-based conservation and management decisions. Detailed maps also allowed managers to enhance stewardship by private landowners, whose large ranches are integral to the corridor. Partners funded fence modifications and treatments of cheatgrass and other invasive plants across a mix of public and private segments within the corridor.

“Just like Wyoming, Nevada has long valued our mule deer migrations,” said Tony Wasley, director of the Nevada Department of Wildlife. “This effort has provided us with a new level of technical expertise to get these corridors mapped in a robust way. We look forward to using these maps to guide our stewardship of Nevada’s mule deer migrations.”

In 2018, the USGS and several western states jointly created a Corridor Mapping Team for USGS scientists to work side-by-side with state wildlife managers and provide technical assistance through all levels of government. With coordination from the Western Association of Fish and Wildlife Agencies and the information-sharing and technical support of the team, agency biologists from Arizona, Idaho, Nevada, Utah and Wyoming collaborated to produce migration maps for the five ungulate species. In 2019, the Corridor Mapping Team expanded to include mapping work across all states west of the Rocky Mountains.

In addition to managers from the respective state wildlife agencies, the report was co-authored by collaborating biologists from the U.S. Forest Service, the National Park Service, and the Bureau of Land Management, among others. The maps themselves were produced by cartographers from the USGS and the InfoGraphics Lab at the University of Oregon.

For more details about big-game migrations in the Western United States, read the report, or download the data via www.ScienceBase.gov. To explore the Western Migrations web viewer, visit the online portal.

In addition to partnering with SWCC and BTA, the department’s Watchable Wildlife Program will conduct its own critter-based lectures twice each month beginning Jan. 7.

Video of the Month: Give Arizona’s Wildlife a Future

And we need you.

Crucial conservation work is possible because of donors like you. There are two ways to join our mission: Become an annual conservation member, or provide a one-time or recurring gift. Your donation, no matter the amount, makes a difference. Join us today at AZwildlifeHero.com.