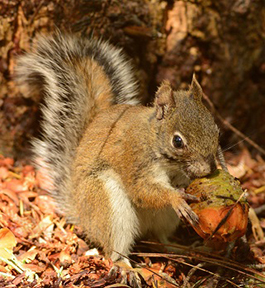 The annual interagency survey of the endangered Mount Graham red squirrel showed an increase in the latest population estimate in the Pinaleño Mountains of southeastern Arizona, likely due to a new survey method.

The annual survey, conducted jointly by the Arizona Game and Fish Department (AZGFD), Coronado National Forest, and the U.S. Fish and Wildlife Service, resulted in an estimate of 156 squirrels. This is an increase from the 109 squirrels estimated in 2021 after a new survey method was implemented to more thoroughly survey their habitat.

“After the Frye Fire impacted a significant amount of the forest, we needed a better survey method in order to search out areas that red squirrels may not have been previously occupying,” said Holly Hicks, the department’s small mammal project coordinator. “This method was piloted for the past three years in conjunction with our usual annual survey to determine the accuracy and to compare the two methods.”

Previous annual red squirrel surveys focused on visiting all known “middens,” or areas where red squirrels store their cones. This method did not systematically detect middens created by red squirrels as they moved to new or different areas on the mountain.

The new method now involves systematically searching for active middens within survey plots that are designed to capture the majority of red squirrel habitat in the Pinaleño Mountains. This enables new middens to be detected as they are created, and activity at these middens is then used to estimate the population size.

“We work to actively manage and restore forest conditions for the benefit of all species on Mount Graham, including the Mount Graham red squirrel,” said George Garcia, the Safford District Ranger of the Coronado National Forest. “We are proud to be part of the efforts being taken by the interagency team.”

Marit Alanen, lead biologist for the Mount Graham red squirrel with the U.S. Fish and Wildlife Service, said: ”It’s exciting to have a method where we can survey red squirrels and also allows us to detect occupied areas we may not have known about before.

“Some of these areas are pretty tough to get to and survey, so we appreciate working with the interagency team and all our partners to make it happen.”

The continuing conservation measures for this endangered species and its habitat include the following: assessment of the remaining habitat, insect pheromone treatments to protect trees,  conifer seed collection (including storage,and planting), forest stand monitoring/enhancement,  reducing food and habitat competitors, captive rearing with partners at the Arizona Center for Nature Conservation, The Phoenix Zoo, continuing life history and translocation/augmentation research through the University of Arizona, and continuing annual survey monitoring.

Other long-term impacts to Mount Graham red squirrels and their habitat include insect infestations, competition with non-native Abert’s squirrels, and poor cone crops caused by drought, all of which influence population size.

The Mount Graham red squirrel population peaked at about 550 animals in the late 1990s, but typically ranged between 200 and 300 individuals until the 2017 Frye Fire devastated  much of their habitat.

To assist with the state’s continued bald eagle population growth, the Arizona Game and Fish Department (AZGFD) encourages outdoor recreationists, aircraft pilots, drone operators and motorized paragliders to do their part by not disturbing the state’s 94 eagle breeding areas.

To protect breeding attempts, some portions of public land and water areas will be temporarily closed to help these majestic animals and ensure even more young eagles take to the skies this spring.

During the 2022 breeding season, 78 young hatched, and 61 reached the important milestone of their first flight, known as fledging.

A portion of land west of the lakes is closed to all entry from March 1 through Aug. 31. Contact the Apache-Sitgreaves National Forest, Springerville Ranger District, at 928-333-6200.

A portion of the shoreline may be closed to foot entry from Dec. 1 through June 31. Contact the Apache-Sitgreaves National Forest, Lakeside Ranger District, at 928-368-2100.

(Tunnel and River). Depending on the nesting location, portions of the lakes may be closed to watercraft and a portion of the shoreline may be closed to foot entry from March 1 through July 31. Contact the Apache-Sitgreaves National Forest, Springerville Ranger District, at 928-333-6200.

No vehicle, watercraft or foot entry is allowed into a portion of the Lower Agua Fria Arm from Dec. 15 to June 15. Contact Maricopa County Parks and Recreation at 928-501-1710.

Depending on the nesting location, the portion of land to the north or south of Luna Lake may be closed to vehicle and foot traffic from Jan. 1 to June 15. Contact the Apache National Forest, Alpine Ranger District, at 928-339-5000.

Depending on the nesting location, a portion of the trail on the lake’s east side is closed to vehicle and foot traffic from Dec. 1 to June 30. Contact the Prescott National Forest, Bradshaw Ranger District, at 928-443-8000.

A portion of the shoreline is closed to foot entry from March 1 through Aug. 31. Contact the Apache-Sitgreaves National Forest, Black Mesa Ranger District, at 928-535-7300.

If you are visiting bald eagle country, an advance call to the local land management agency, such as the local U.S. Forest Service district office, or the Arizona Game and Fish Department may help to plan your trip to avoid disturbing bald eagles. By following these simple guidelines, we can all help to ensure that our living wildlife legacy will last for generations to come:

You can help conserve and protect bald eagles and conservation research and recovery efforts by reporting any harassment or shooting of bald eagles. Call the Arizona Game and Fish Operation Game Thief Hotline at 800-352-0700 or U.S. Fish and Wildlife Service Law Enforcement at 480-967-7900.

AZGFD’s bald eagle management efforts are supported by the Heritage Fund, an initiative passed more than 30 years ago to provide for wildlife education and conservation through Arizona lottery ticket sales. 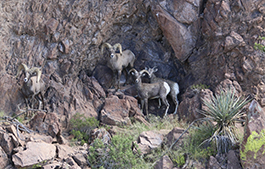 More than two dozen bighorn sheep from southeastern Arizona are getting used to their unlikely new home on Antelope Island at Utah’s Great Salt Lake.

The animals were recently translocated from the Morenci-Clifton area by the Arizona Game and Fish Department (AZGFD), the Utah Division of Wildlife Resources, and other stakeholders. A pneumonia outbreak in 2018 resulted in the loss of the bighorn sheep population at Antelope Island State Park, where the herd had served for two decades as the source for translocations elsewhere in Utah.

Meanwhile, the roughly 300 bighorn sheep in the Morenci-Clifton area have been vulnerable to traffic accidents and other hazards, given their proximity to the Morenci Mine and populated areas.

“This is what collaborative conservation looks like,” said Gary N. Thornton, president and CEO of the Wild Sheep Foundation. The organization’s Arizona and Utah affiliates were involved with the helicopter and net gun translocation, along with the Bureau of Land Management, the University of Arizona, and the KUIU Conservation District.

Fall surveys show there are now an estimated 600 desert bighorn sheep roaming southern Arizona, most notably in the Picacho Mountains north of Tucson and east of Interstate 10 (across the highway from the iconic Picacho Peak). Absent from the range since the 1950s, the animals were returned there in 2018 when 30 were translocated. An additional 10 animals were added to the herd last year. The recent surveys suggest the herd has grown to almost 100 in a relatively short amount of time.

So, too, are the bighorn sheep living in the nearby Silverbell Mountains, the source population for the Picacho Mountains. Despite having almost 50 sheep moved from the range since 2016, the population remains stable at about 200, having survived an outbreak of pink eye years ago.

Other stable, or growing, herds in the region include those in the Catalina, Peloncillo, and Galiuro mountains. The overall population in Arizona has grown from 1,500 in 1957 to more than 6,000 today through translocations to existing herds or vacant historic ranges.

Walk on the Wild Side: Base and Meridian Wildlife Area 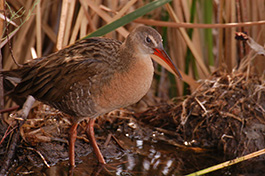 The nearly 200-acre Base and Meridian Wildlife Area, located 17 miles west of Phoenix at 115th Avenue and the Gila River, contains primarily wetland, riparian and riverbank habitat, providing productive ecosystems for a number of sensitive, threatened and endangered wildlife species.

The riparian habitat common to the Gila River is recognized as Arizona’s highest quality of nesting habitat for white-winged doves. The property is equally valuable nesting habitat for mourning doves. Other species include Gambel’s quail, coots, gallinules, and other shorebirds.

Several “special status species” occur on, or near, the wildlife area, including the federally endangered Yuma clapper rail and the federally threatened Western yellow-billed cuckoo. 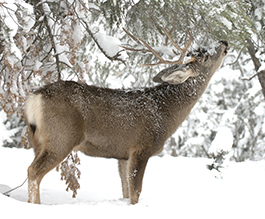 Mule deer — named for ears that are similar to those of a mule — are easily identifiable by their black-tipped tail and antlers that grow in a forked pattern. Antlers are shed in late winter, with regrowth beginning soon after.

The normal breeding period for mule deer is November through December, with offspring born June through August (typically, one or two fawns per doe). Fawns quickly gain footing after birth, but are hidden for four to eight weeks until they are strong enough to evade predators. Those predators include mountain lions, coyotes, bobcats and eagles. 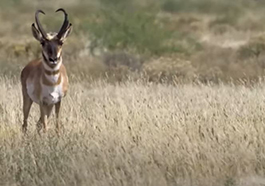 Arizona Game and Fish Department researchers are trying to determine the best methods for restoring Arizona’s imperiled grasslands, home to a rich diversity of plants and wildlife.