February 2021
In This Issue 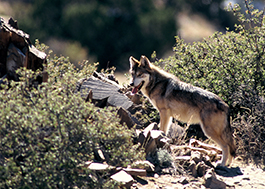 A peer-reviewed scientific paper published last week in the conservation journal Diversity and Distributions demonstrates that the Mexican wolf’s historical range in the southwestern U.S. and Mexico contains ample high-quality habitat to focus recovery efforts within that range.

The research, a multi-year collaboration between Mexican and U.S. scientists, is significant because it supports the 2017 Mexican Wolf Recovery Plan and contradicts the contention of some advocacy groups that Mexico does not include enough adequate habitat to support recovery efforts there.

Benefitting from new mapping data and cutting-edge habitat analysis methods, the research is the first to include an evaluation of prey biomass across the landscape — a critical element to assure sustainable wolf populations for the future. Besides the area occupied by the current central Arizona and New Mexico population of Mexican wolves, two other large areas of high-quality wolf habitat were identified in the Sierra Madre mountains of Mexico, which mirror areas defined by Defenders of Wildlife in their 2006 publication “Places for Wolves.”

“This habitat analysis provided the foundation for the current Mexican Wolf Recovery Plan and will guide continued collaborative recovery efforts with Mexico,” said Clay Crowder, AZGFD assistant director, wildlife management division. “Mexico contained 90% of the Mexican wolf’s historical habitat, so it is unjustified to force recovery entirely in the United States. Efforts to recover Mexican wolves north of historical range, as some have advocated, are not only unnecessary but against federal 10(j) regulations, because suitable habitat exists within historical range.”

Recovery efforts are well underway in both countries with a minimum of 163 Mexican wolves in the U.S. and about 30 in Mexico.

Andrejko, who has been with Game and Fish for more than 30 years, was recognized for his outstanding work on the department’s award-winning Arizona Wildlife Views magazine.

“We’re thrilled that George received this honor from the association,” said Elaine Pittman, editor of Arizona Wildlife Views. “His photos bring life and beauty to the articles and provide an amazing look at Arizona’s wildlife, and the people doing the on-the-ground conservation work.”

The summary from one of the judges says it all: “Very special moments captured by a dedicated, smart, and patient photographer. The love for what he does comes through in each photograph.”

Want to find out more about Andrejko and see some of his work? Check out this great video, shot and produced by AZGFD’s video production section.

Or, better yet, also subscribe to Arizona Wildlife Views magazine. Get seven issues of the bi-monthly magazine for only $7. Subscribe online, or visit https://www.azgfd.com/Media/Magazine/ for more information.

Walk on the Wild Side: Cluff Ranch Wildlife Area 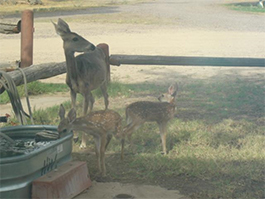 Cluff Ranch was acquired in 1949 through a property transfer with the General Services Administration. Cluff Ranch has a history of conservation reaching back to 1880, when the property was first homesteaded. Throughout the years, the Cluff Ranch has been a small community with a school, Soil Conservation Service plant material center, Safford National Wildlife Refuge, and today it’s known as the Cluff Ranch Wildlife Area. It sits at an elevation of 3,500 feet on the northside of the Pinaleño Mountains in southeastern Arizona.

Overnight public camping is allowed in designated areas for no more than 14 days within a 45-day period. There is one restroom at Pond Three and picnic tables at several locations around the pond. There also are hiking opportunities. A trail runs along Ash Creek and Pond Three, and the Grand Enchantment Trail passes through Cluff Ranch and on to the Coronado National Forest and Mount Graham.

A few of the species of birds that have been documented at Cluff Ranch include the bald eagle, yellow-billed cuckoo, red-tailed hawk, Gambel’s quail and roadrunner. The wildlife area also attracts mule and white-tailed deer, javelinas, coatis, badgers, jackrabbits, skunks, foxes, bobcats, coyotes and raccoons.

In addition to partnering with SWCC and BTA, the department’s Wildlife Viewing Program will conduct its own critter-based lectures twice each month.

Thirty-six native fish species live in Arizona. Of these species, one is extinct, 34 are identified and prioritized as needing conservation assistance, and 20 are federally listed as endangered or threatened.

Hickerson works in the department’s Gila River Basin Native Fishes Conservation Program, where he focuses on restoring and expanding populations of endangered spikedace, loach minnow, Gila topminnow and roundtail chub around the state in the Gila River and its tributaries.

“My average day can vary greatly,” Hickerson said. “On Monday, I can be backpacking 10 miles into a remote canyon to evaluate loach minnow habitat. On Wednesday, I’m writing computer code for statistical analyses, and I’m stocking a pond with Gila topminnow on Friday.”

Growing up, Hickerson knew he wanted to work in the great outdoors, especially because he’s been fishing since he was old enough to hold a fishing pole.

“I didn’t realize that a fisheries biologist was a legitimate career until my sophomore year of college at the University of Arizona,” he said. “That was when I realized it was somebody’s job to manage and think about native fish — and that it could realistically be my job.”

At that point, Hickerson committed to being the best fisheries biologist by reading fisheries textbooks cover-to-cover and signing up for every volunteer opportunity that he could fit into his schedule. He completed his master’s degree at the University of Wyoming with the goal of getting a job that he found important and rewarding. “I think I achieved that goal with my current position,” he said.

Thankful to work with a variety of fish species across much of Arizona, Hickerson shares what might be surprising about his role: “I mostly work in desert streams that support fish populations, but people are surprised to learn that I write computer code to streamline everything from data entry to statistical analyses and for creating maps.”

Longtime angler, aquatic species conservationist and statistical coding programmer — Hickerson is quite the Renaissance man, in a fisheries biologist kind-of-way.

Video of the Month: Save the Burrowing Owls! 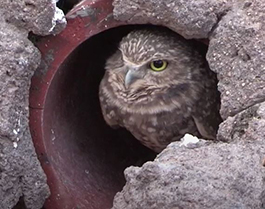 Arizona Game and Fish Department wildlife biologists, along with volunteers from Audubon Southwest and Wild at Heart, an Arizona-based raptor rescue organization, have joined together to help build habitats for displaced burrowing owls.

The owls were displaced by housing construction, but they will have new places to live in the agricultural fields at Powers Butte near Buckeye. Powers Butte is a department-owned property that is used for outdoor recreation and other activities that help the agency to conserve and protect Arizona wildlife.