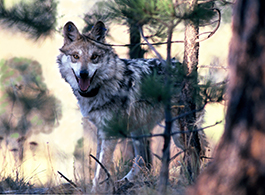 Kudos to the Associated Press and reporter Susan Montoya Bryan for a recent article about the release of two pairs of endangered Mexican gray wolves south of the U.S. border, part of an ongoing reintroduction effort by U.S. and Mexican wildlife managers.

“Through international cooperation, recovery efforts are moving forward in Mexico and contradict the contention of some critics that recovery can’t occur in that country,” said Jim deVos, Mexican wolf coordinator for the Arizona Game and Fish Department, said in a statement. 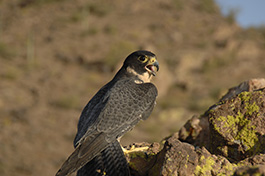 Coconino National Forest officials have implemented restrictions on climbing and other activities on a portion of the cliff face of an area known as the Peaks Crag through Aug. 15 to protect nesting peregrine falcons.

Similar restrictions have been in effect over the last several years, allowing the nesting pair to successfully fledge one to three young each season, while still affording recreational climbing opportunities in the vicinity.

Officials have made slight modifications from the previous years’ Forest Order to provide access from Forest Road 522 (Freidlein Prairie Road) to the climbing area north of the peregrines’ nest site.

The Forest Service, with the help of volunteers, will monitor the effectiveness of the closure and nesting success to guide future management of the area. The closure could remain in effect through Aug. 15, but — based on previous monitoring results — may be lifted in mid-July once the young have successfully fledged.

It is prohibited to be within the southern portion of the Peaks Crag cliff face for rock climbing or any other activity. The Forest Order and map of the closed area will be posted at the Kachina Trailhead kiosk, the kiosk on Forest Road 522, and Coconino National Forest’s public website under the Forest Orders link

Peregrine falcons were once listed under the Endangered Species Act. They continue to be managed as Forest Service Sensitive Species and State Species of Concern. This closure affords land managers the opportunity to assess the effectiveness of a partial closure and better determine the appropriate environment needed for peregrines to successfully nest and raise their young.

Questions about the falcons and their management can be directed to Amyann Madara, wildlife biologist, at amyann.madara@usda.gov or 928-527-8247. 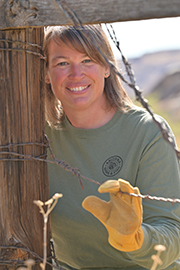 A self-proclaimed “desk jockey,” Erin Butler believes that variety is the key to her day-to-day activities as a terrestrial wildlife program manager at the Arizona Game and Fish Department’s regional office in Kingman.

Butler’s duties include administrative work, and managing staff and wildlife conservation projects. She designs maps for ongoing projects, plans wildlife translocations, and is an all-around troubleshooter.

“Occasionally, I get to do field work — I might do a ground-cover transect for a planned habitat treatment, or hike a creek to survey for frogs, or fly in a fixed-wing plane to survey for pronghorn,” Butler said.

It’s the diverse responsibilities that Butler enjoys the most about her job. Terrestrial wildlife projects include working with a variety of species, from amphibians and mammals to birds. She also works on environmental reviews, or water catchment redevelopments, and rarely works on the same project each week.

“When you tell people you’re a wildlife biologist, they automatically think you work with wildlife all day, but for me those days are rare,” she said.

Butler explains that it takes a great amount of coordination, and time to plan and complete a single project. For example, with a project such as maintaining or redeveloping wildlife waters, tasks include multiple staff and community or agency partner discussions, site visits and environmental clearances. Next, project funding must be secured, supplies purchased, and staff and volunteer crews scheduled.

Butler wanted to be a veterinarian before she began college, then changed her focus to mining engineering. After several internships, she took her father’s advice and went back to her earlier plans of working with animals. “My intent was to get a wildlife degree with a minor in engineering,” she said. “I had planned to work for a mine reclamation company restoring wildlife habitat.”

Later, a friend who worked for Game and Fish suggested that she apply for a communication center dispatch job to get started with the department. She was later hired as a wildlife technician, then a wildlife specialist in Kingman, which led to the position she enjoys today.

“People may not be aware that funding for wildlife conservation often comes from hunters and anglers, but there are other ways to contribute,” Butler said, explaining that the public can participate in a watchable wildlife event, donate to provide water or care for Arizona wildlife, purchase a hunting or fishing license — even if they don’t plan to use it — or volunteer with a local wildlife conservation organization. 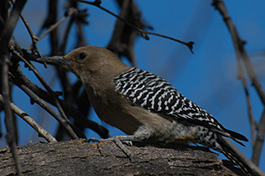 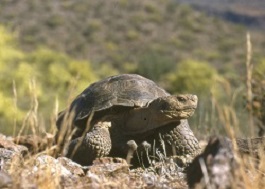 Video of the Month: Meet Dorian 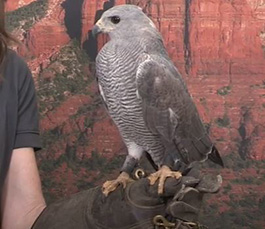 Check out this video, starring Dorian, a gray hawk that cannot be returned to the wild and now serves as an “ambassador” animal at the Arizona Game and Fish Department’s Wildlife Center.

The species, primarily found along southern Arizona’s riparian forests and woodlands, is seldom seen. Arguably the most beautiful of all raptors, it’s a sight to behold for birdwatchers who flock from around the world to get a glimpse of this fascinating bird.