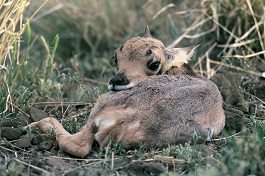 The Arizona Game and Fish Department (AZGFD) reminds the public to leave baby wildlife alone. As temperatures rise and days grow longer, the newborns of many wildlife species are beginning to explore the world around them.

“Picking up or ‘rescuing’ baby wildlife is often unnecessary and can have negative consequences,” said Stacey Sekscienski, wildlife education program manager. “While the intention is well-meaning, the ‘rescue’ often results in a newborn or juvenile animal being taken from its parents, which are likely just out foraging for food and water.

“This can often leave a parent searching for its young, and wildlife raised by humans is less likely to survive if released back into the wild.”

Once they’ve been removed from the wild, some species of baby animals, such as elk calves or deer fawns, may even have to be euthanized because they cannot be released due to disease concerns. In addition, zoos and other wildlife sanctuaries have limited space to hold them.

Wildlife centers around the state are inundated each year with baby birds, rabbits and other wildlife that were unnecessarily taken from the wild.

Young wildlife found in a yard or in the field is rarely abandoned. Typically, once the perceived predator (perhaps a dog, cat or person) leaves the area, one or both parents will return and continue to care for the young.

More information on what to do if abandoned or injured wildlife is encountered. 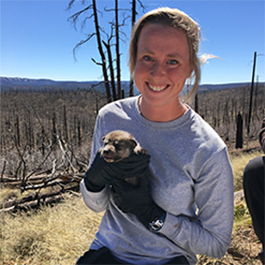 Even as a youngster, Genevieve Fuller always knew what she wanted to do for a living.

“My love of wildlife and the outdoors spurred me to pursue a line of work that allowed me to protect, manage and work with those resources,” Fuller said.

Fuller’s job of managing Mexican wolves changes with the seasons. In the spring, her time is spent locating wolf dens for cross-fostering operations that aim to help the genetic recovery of the Mexican wolf population. In the fall, she traps wolves for the placement of GPS collars. All year, Fuller works closely with ranchers and range riders to prevent and mitigate wolf-livestock conflicts.

“My favorite part of the job is when I go out on foot and look for wolves in preparation for our annual counts,” she said. “There’s nothing like being out in the mountains following wildlife.”

Fuller has a favorite story about a den count operation: “Each year, when adult wolves are away, we visit dens to carefully and quickly count pups. The counts are important for understanding how many pups are born each year and how many reach adulthood.

“One year when we arrived, the tiny puppies ran into their den. I crawled inside to count, and most of them huddled together. I heard one small pup, small enough to fit in a cereal bowl, give a little, high-pitched growl. He stepped forward and gave me his biggest, strongest, little bark-howl.

“It was one of the cutest things I have ever seen. I quickly got my count and left the area, letting the little one think he scared me off.”

Walk on the Wild Side: May Memorial Wildlife Area

It’s not because it’s May. Or that Memorial Day happens to fall in May.

What makes the May Memorial Wildlife Area a destination any time of year is how it tests the skills of even the most accomplished birdwatcher or wildlife viewer.

Access is limited at May Memorial, located on the east side of the Chiricahua Mountains in southeastern Arizona. Note: Visitors must contact the Tucson regional office of the Arizona Game and Fish Department (520-628-5376) in advance for the latest access information. The wildlife area is closed to hunting, as well as the discharging of all firearms. Camping access also is limited. The property is not actively managed, with the exception of periodic maintenance of the spring and repair of fences.

Curious about the name “May Memorial?” A little history: The Clarence May and C.M.H. May Memorial Wildlife Property was obtained by the Arizona Game and Fish Commission from Isabel H.M. May through a trust deed June 4, 1941. The department’s management efforts are to ensure that deed restrictions are enforced, that the area remains free of livestock, and that there is a water source for wildlife. By deed, the property is for “the use and benefit of the Arizona Game and Fish Commission, forever.” It is to be used as a game farm or game refuge with no hunting permitted, except for the management of predatory animals. No livestock grazing is permitted, except for the game warden’s horses. No horses are being grazed.

By the way, Clarence M.H. and Isabel H.M. May are buried on the property in a small fenced cemetery. A stone monument commemorating the property is located near that cemetery. 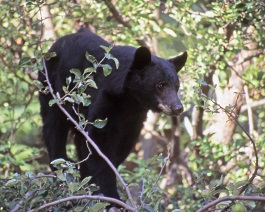 The Desert is Awake! — 1-1:30 p.m. May 16. Description: With summer right around the corner, learn how some species of wildlife make special adaptations to help them survive the Arizona heat. This presentation will include an up-close look at four of the Wildlife Center’s “Animal Ambassadors.” Register here 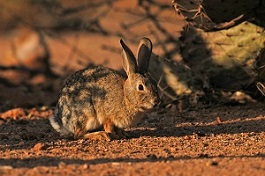 Did you know there are three species of cottontail rabbits and two species of jackrabbits in Arizona?

While both kinds of rabbits are widespread throughout the state, the cottontail is easily distinguishable by its smaller body size and much shorter ears. Here are some other fun facts about the cottontail:

Why would a Flagstaff-based brewery want to team up with the Arizona Game and Fish Department?

Mother Road’s Oliver Adams explains what makes this a perfect partnership when it comes to conserving and protecting Arizona’s wildlife.