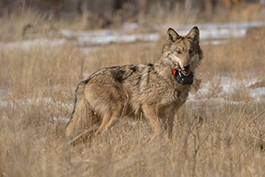 Note: The information below is from a joint news release from the U.S. Fish and Wildlife Service and the Arizona Game and Fish Department.

The Mexican wolf count earlier this year indicates that the population of Mexican wolves has increased by 12 percent since last year, raising the total number of wolves in the wild to a minimum of 131 animals.

That number is among the findings of the Mexican Wolf Interagency Field Team (IFT), a task force comprising federal, state and international partners. From November 2018 through January 2019, the team conducted ground counts in Arizona and New Mexico that concluded with aerial counts of Mexican wolves in February.

Among the IFT’s findings: 131 wolves are nearly evenly distributed — 64 wolves in Arizona and 67 in New Mexico. Last year, the team documented 117 wolves. This year’s total represents a 12 percent increase in the population of Canis lupus baileyi.

“The survey results indicate the Mexican wolf program is helping save an endangered subspecies,” said Amy Lueders, regional director of the U.S. Fish and Wildlife Service’s Southwest Region. “The Mexican wolf has come back from the brink of extinction, thanks to scientific management and the dedicated work of a lot of partners. With continued support and research, we can continue to make progress in Mexican wolf recovery.”

“The numbers highlight the wolf’s progress in the wild,” said Jim deVos, assistant director of wildlife management for the Arizona Game and Fish Department. “The results of this census are very important as they reflect the great progress being made in the recovery of the Mexican wolf in the United States. The increase of about 12 percent in the Mexican wolf population is not an isolated year, but rather a continuum of increases over the last 10 years.”

For more information on the Mexican Wolf Recovery Program, visit http://www.fws.gov/southwest/es/mexicanwolf or  www.azgfd.gov/wolf. 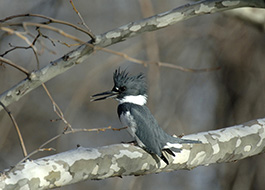 Looking for some interesting and scenic places to go hiking and maybe see some wildlife while you’re at it? The Arizona Office of Tourism’s travel newsletter has an article titled “5 Secret Arizona Swimming Holes Worth the Hike.”

Some of these hikes are more difficult than others, so do your homework first. The author notes, “Most of these swimming holes are dependent on rainfall or snowmelt. Always check conditions before setting forth on your hike.”

and other interesting tidbits 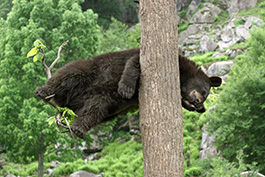 Note: This article originally appeared in the May-June 2018 edition of Arizona Wildlife Views magazine. To learn more about this award-winning magazine and to subscribe, visit www.azgfd.gov/magazine.

Recently, there has been higher bear activity in human-developed areas statewide. This is because of the dry conditions and food shortages in their natural habitat. They are coming into human-developed areas in search of food and water. As I was chatting with a member of the public a few weeks ago about these bears, she asked, “Do bears snore?” Well, I can honestly say that I’ve never been asked that before and I had no idea. Naturally I went to the internet and promptly found a hysterical video of a denned bear sawing logs (search YouTube for “black bear snoring”). So, I can positively say now the answer is “yes!”

Whatever you do, don’t try to outrun a bear. While they look rotund and lumbersome, black bears can run up to 35 mph. The average human spring speed is around 15 mph. So instead of running, what should you do? The answer is: BE BIG! Bears are normally shy and avoid conflict. By standing up tall, shouting, waving your arms and throwing water bottles or racks at the bear, you make yourself seem like a threat and the bear will probably leave. Bears are very protective of cubs, so you should always avoid walking up to cubs or standing between a sow and her cubs.

Wildlife managers frequently hear, “I saw a brown bear!” A brown bear (Ursus arctos) is another name for a grizzly bear. Arizona only has one species of bear, the black bear (Ursus americanus). Black bears come in different color phases including brown, cinnamon and even blonde. Black bears may also have some white on their chests.

Just a word of advice, don’t eat what they eat. On average, a bear consumes 5,000-7,000 calories every day. In preparation for winter, bears overeat (called hyperphagia) and increase their body weight by about 35 percent. They will consume up to 20,000 calories a day, equivalent to about seven large cheese pizzas! Bears are omnivorous: a majority of their diet consists of nuts, berries and vegetation. Occasionally they will eat carrion, insects and young mammals.

Karen Klima is the terrestrial wildlife program manager in the department’s regional office in Tucson. 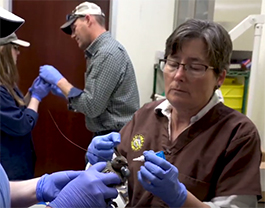