Due to a half-century of collaborative conservation efforts between federal, state, tribal, and non-governmental organizations, the Apache trout has a brighter and more sustainable future.

The U.S. Fish and Wildlife Service (USFWS) recently announced the completion of a five-year status review which recommends delisting the species from the Endangered Species Act (ESA).

According to a USFWS news release, the next step will be for the Service to publish a proposed rule in the Federal Register to delist the Apache trout. The proposed rule, expected to publish by the end of 2022, will include a 60-day public comment period seeking input from state, federal, tribal, and other government agencies, the scientific community, industry, or any other interested parties concerning the proposed delisting.

The five-year review was informed by a 2021 species status assessment (SSA), which includes the best available scientific information. The assessment evaluated the species’ current needs, conditions, and threats, in addition to modeling future scenarios. It also involved contributions from scientific experts, including an independent peer review and review by federal and state partners.

The Arizona Game and Fish Department (AZGFD), USFWS, White Mountain Apache Tribe, USDA Forest Service, and Trout Unlimited share responsibilities under a 2021 Apache Trout Cooperative Management Plan. That plan outlines goals to reach recovery and delisting of the Apache trout, and if delisted to maintain a recovered status, while providing sportfishing opportunities. Conservation actions such as non-native trout removal, fish barrier construction, and Apache trout reintroductions have made recovery possible and will continue to drive conservation.

Apache trout is Arizona’s state fish and is native exclusively to the streams around the White Mountains in the eastern part of the state. AZGFD has been involved in Apache trout recovery efforts for decades. Early conservation work among the conservation partners led to the downlisting of Apache trout in 1975 from endangered to threatened. Simultaneously, a special rule under the Endangered Species Act was adopted, allowing limited fishing of pure Apache trout in specific areas, which led to valuable angler support for the conservation of this species.

Arizona’s state hatcheries at Silver Creek and Tonto Creek have assisted with Apache trout production, and AZGFD hatchery staff stock several streams and lakes in eastern Arizona for recreational fishing. The schedule for these stockings is currently in flux due to renovation work at Silver Creek Hatchery. Several recovery streams not supported by hatchery production are also open to catch-and-release angling opportunities. 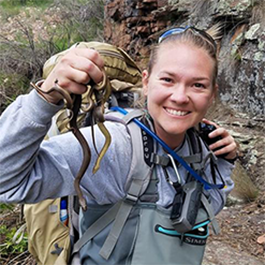 When Sharon Lashway was asked what a typical workday day is like for her, she laughed.

“I work with birds, bats, reptiles, amphibians, falconry — basically any animal that is native to the state of Arizona, and is not pursued through hunting and fishing!” she said.

With such a mix of responsibilities, Lashway’s laughing response makes sense. The terrestrial nongame wildlife specialist for the Arizona Game and Fish Department might spend a few days camping in the field, and hiking in creeks to monitor frogs and snakes. Or, she might be found glued to her binoculars monitoring birds and bats. On the administrative side, she hands out special licenses, and answers phone calls and emails from the public regarding wildlife viewing, injured wildlife and licensing questions.

Lashway always wanted to work with animals, but she wasn’t really sure what she wanted to do. During a chance internship managing pronghorn and bison while pursuing a degree in zoology, it finally clicked. “This initial internship opened my eyes to the importance of true wildlife management and protecting Arizona’s vital resources,” she recalls.

Given her conservation work, it often surprises people to learn that Lashway is an avid hunter. To her, it makes absolutely sense and speaks to the department’s core mission.

“Hunting and fishing allow for management of wildlife species, in turn conserving their status on the landscape for decades to come,” she said. “Conservation of native species is imperative to preserving that natural heritage, and the foundations of our wildlife community in our unique ecosystems.”

Lashway’s line of work has delivered plenty of amazing experiences, including a memorable day when she spotted two elusive Mexican gray wolves. To her, the magic of her job is sharing exactly what it means to conserve and protect wildlife.

“Conservation is happening every day at the minuscule level of the tiny, endemic spring snails, to the landscape level management of habitat to allow pronghorn to thrive.” 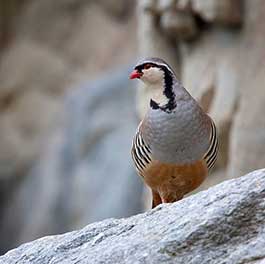 The chukar partridge, Alectoris chukar, has a generic Greek name meaning “chicken” or “farmyard fowl,” with the specific epithet being onomatopoeic for their common “chu-kar” call.

Chukars are robust birds that are smaller than a dusky grouse but larger than our southwestern quail species. They average about 15 inches long and weigh about 20 ounces. Females are slightly smaller than males and lack the spurs males sport. Both sexes display the same conspicuous coloration, with a prominent black line through the eyes and forehead that rings a white throat and cheeks. Plumage is generally grayish-brown to olive above, with buffy underparts and a gray chest. Flank feathers show black and chestnut barring. The bill, legs and feet are red; the eye is dark with a red ring around it.

This striking immigrant to the eastern United States arrived from Iran, Nepal and other arid Asian nations in the 1900s. Chukars struggled until they were set loose in the arid, open uplands of Nevada in 1935. Today, chukars are important game birds in many Rocky Mountain states. Though relatively sparse in Arizona, they can be found on talus slopes and steep, rocky areas in northwestern Arizona, primarily along the Arizona Strip.

Chukars are seed-eating birds, but will also forage on other plant parts. Some favored foods are seeds or green shoots of cheatgrass, filaree, tansy mustard, Indian ricegrass and wheatgrass. Chicks feed on insects at first and then focus gradually on eating plant foods. During hot summers, birds heavily use any available water sources. Most active in the morning and late afternoon, chukars forage their way uphill.

Chukars are sociable and can be found in large flocks, especially when water resources are limited. Large flocks will split up when rains promote green-up. They are rather vocal, rallying their covey mates with increasing intensity by calling out “chuk, chuk, chuk, per-chuk, per-chuk, chu-kar, chu-kar.” If flushed, they often squeal and cry a series of “whitoo, whitoo” as they fly away to the nearest rocky slope to hide between boulders. They are strong, fast fliers over short distances, though they prefer to run and can outrun a person on foot uphill!

Chukars pair in February and March with males often fighting bloody battles for hens. Hens lay eggs in shallow nests against a stump, bush, rock or clump of grass. Incubation may take 25 days. Some pairs rear chicks together while in other pairings, males lose interest in hens as incubation starts and drift away with other males in the area. Precocial chicks scramble after their mother as soon as their down dries and can fly a distance of 50 to 60 feet about two weeks later. However, if late spring rains fall before chicks have grown feathers and they are cold, chick mortality can be very high.

Chukars are sparse but stable in Arizona. Few people hunt chukars in the state because they inhabit remote, steep, rugged, canyon country.

Chukars rely heavily on cheatgrass, which is highly invasive in many arid reaches of Arizona. Habitat improvements that seek to remove or decrease cheatgrass cover may have deleterious effects on chukar numbers. 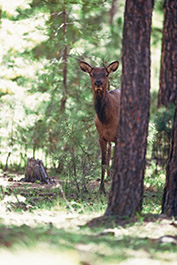 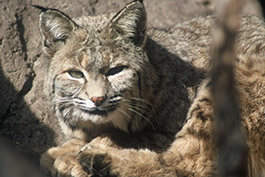 With camera in hand, Mark Koster doesn’t have to travel far from his Scottsdale home in search of the perfect image of a hawk, lizard, or even a bald eagle. Check out this video about Koster and his passion — or, as he calls it, his “addiction” — for urban wildlife photography.