November 2017
In This Issue

Walk on the Wild Side: Tres Rios Wetlands 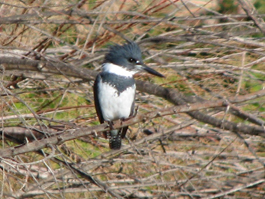 Phoenix’s Tres Rios Wetlands is home to more than 150 species of birds and animals, making it a great area for both birders and wildlife watchers to explore. With the goal of returning the Salt River to the condition it was in the 1800s, the city has been working on restoring the area’s wetland and riparian habitat. During late fall and early winter, the trees are frequently full of yellow-rumped and orange-crowned warblers and birders may also observe black-throated gray, Townsend’s, yellow and black-and-white warblers.

Public recreation in the wetlands includes walking, hiking, biking, photography, horseback riding and fishing. The 290 acres of wetlands serve a dual purpose: They further clean any wastewater runoff from the 91st Avenue Wastewater Treatment Plant before it’s discharged into the Salt River, while also providing a habitat for animals, waterfowl and amphibians. The area is open to the public between sunrise and sunset, and free access permits must be obtained from the city in advance.

The wetlands are located 16 miles southwest of central Phoenix. To get there: Go west on I-10 to the 91st Avenue exit. Drive south for five miles to Broadway Road. Continue south for one mile to a small paved driveway on the right side of the road. The area does not provide restrooms, water fountains or garbage bins.

While in the area, you also can explore the Arizona Game and Fish Department’s Base and Meridian Wildlife Area, which is located adjacent to the Phoenix International Raceway in Avondale five miles south of I-10 on Avondale Boulevard. Whether you’re in search of a place to fish, hike or watch birds, Base and Meridian is home to a host of bird, mammal and reptile species. 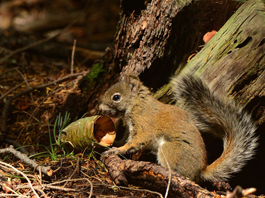 An annual survey of the endangered Mount Graham red squirrel showed a significant decline due to the effects of the lightning-caused Frye Fire in the Pinaleño Mountains of southeastern Arizona. The annual survey, conducted jointly by the Arizona Game and Fish Department, Coronado National Forest, U.S. Fish and Wildlife Service, Arizona Center for Nature Conservation — Phoenix Zoo, and the University of Arizona, resulted in an estimate of only 35 squirrels. This is a significant decrease from the 252 squirrels estimated in 2016. Evidence of the Frye Fire was observed in 95 percent of the surveyed locations, 80 percent showed at least some habitat loss, and 44 percent were completely burned. Read more about the fire’s impact on the Mount Graham red squirrel. 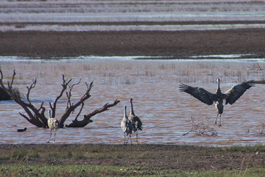 It happens every year. As if on cue, they pick up and travel thousands of miles from places like Idaho, Wyoming and Montana, and some from as far away as Canada, Alaska and even Siberia. They are Arizona’s true “snowbirds,” content to spend winter days basking under mild, sunny skies before getting the itch to turn around and head back north sometime in March or early April. For the past few weeks, sandhill cranes by the thousands have been trumpeting their annual arrival in southeastern Arizona, primarily at the Whitewater Draw Wildlife Area in the Sulphur Springs Valley — and a lot more of them are on the way. AZGFD’s live-streaming camera of the area allows anyone with an Internet connection to enjoy this thrilling wildlife-watching experience. Get more information about the camera and viewing sandhill cranes.

Sandhill cranes have a long history in Arizona. Petroglyphs of the birds that were etched into stones by native people hundreds of years ago can still be found along the lower Gila River. Here are some interesting facts about them: 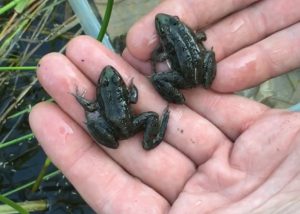 During the September release, AZGFD biologists placed the Chiricahua leopard frogs into restored habitats on the Clifton Ranger District

Chiricahua leopard frogs received extra help getting the hop on avoiding extinction after 454 of the threatened species were recently released into restored habitat on the Clifton Ranger District on the Apache-Sitgreaves National Forest. In May, AZGFD biologists, in coordination with numerous organizations, transported leopard frog egg masses from one of Turner Enterprises’ ranches in south central New Mexico and the Bureau of Land Management rearing facility in Las Cruces, N.M., to the Arizona Center for Nature Conservation — Phoenix Zoo. The zoo head-started the egg masses, which involves raising tadpoles from the collected egg masses in a predator-free environment, so that the juveniles can be released into the wild. The eggs produced tadpoles and ultimately hundreds of the small threatened frogs. Read more about the release. 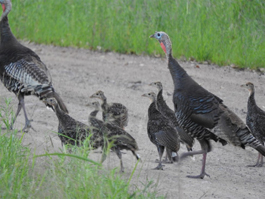 Roosting sites are identified from a GPS point taken at midnight. Tree species, diameter at breast height, height of roost tree, vegetation type and tree density were recorded for each roost site. Between May 1 and Aug. 31, 274 roost sites were surveyed.

From May 1 to Aug. 31, 2017, there were 17 nesting attempts made by Gould’s turkeys fitted with radio transmitters. The success of the nest was monitored during the 28-day incubation period. In total, there were 10 nests that reached the 28-day incubation period; these resulted in 61 poults. The poults were then further monitored every three days until the 15th day post hatching to determine survivorship.

The research being conducted on Gould’s turkeys will lead to better management of the species and identification of critical Gould’s turkey habitat. This data will also allow managers to identify future nesting locations and areas where Gould’s turkeys can be translocated. This research is made possible by the Arizona Game and Fish Department, the National Wild Turkey Federation and Louisiana State University. — Alex Smallwood

Video of the Month: 20th Anniversary of the California Condor 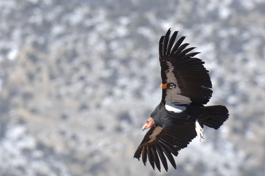 Hundreds gathered last year to watch as two California condors were released on the 20th anniversary of the reintroduction of captive-bred birds in Arizona — a multiagency effort that has brought the species back from the brink of extinction. California condors are the largest flying land bird in North America, have a wingspan of up to 9.5 feet and can weigh up to 25 pounds. In 1987 there were 22 birds nationwide and as of 2016 there were more than 400 — at that point there were more birds in the wild than in captivity, which is a turning point for the recovery effort. The ultimate goal is to create a self-sustaining population, with three major reintroduction sites contributing to the effort. Arizona’s condor release site is located in the northern part of the state on the Vermilion Cliffs.
Watch the video