September 2017
In This Issue

Walk on the Wild Side: West Fork of Oak Creek Trail 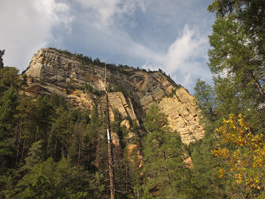 If you’re looking for a hike that won’t disappoint at any time of the year, the West Fork of Oak Creek Trailhead is one of Coconino National Forest’s most popular trails and is described as being “ablaze with color” in autumn. As we ease into September, it’s hard to not start thinking about the changing of leaves and getting out to enjoy the outdoors as the weather (hopefully) begins to cool down.

The U.S. Forest Service says the West Fork trail is an “easy stroll” but that there are stream crossings at multiple places along the path. Hikers can continue past the maintained trail — which is the first three miles — and onto a more strenuous route that includes hiking in the stream bed. The 14-mile long stretch through the canyon includes wading and boulder hopping.

Area wildlife includes a variety of birds, deer, black bear, bobcats and snakes, although most wildlife will avoid the trail area during times of high human activity. The U.S. Forest Service recommends mornings and weekdays as the best times to enjoy West Fork. There is a day use fee of $10 per vehicle (up to five people per vehicle) or $2 per person for walk-ins, bicycle riders or bus groups. People can also access the area if they have a Grand Annual Red Rock Pass. Purchase a pass

To get there: Drive 17.5 miles south from Flagstaff or 9.5 north miles from Sedona to about halfway between milepost 385 and 384. The trailhead is on the west side of the highway down a paved lane. Park at the Call O’ The Canyon day-use area. The parking lot can be crowded, so it is best to arrive early. 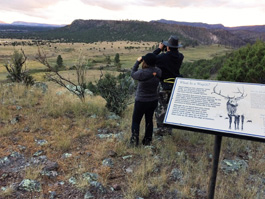 The Arizona Game and Fish Department is partnering with the Arizona Elk Society White Mountain Chapter to offer an elk natural history and viewing workshop on Oct. 7 at Sipe White Mountain Wildlife Area near Eagar. Late September to early October is the best time of year to view elk because it is breeding season (rut). The bulls will bugle as they try to intimidate each other and gather females into harems, and it is truly an awesome time of year to experience this unique wildlife event. Get the details about the elk viewing workshop

The Arizona Game and Fish Department was awarded $12,440 in grant funding from the U.S. Fish and Wildlife Service (FWS) to help protect the state’s 28 species of bats from white-nose syndrome, a deadly fungal disease. Funds issued by the FWS were part of $1 million in grants to 37 states to help combat the disease that has killed millions of bats in recent years nationwide. In Arizona, the funding will be used to research whether the fungus is impacting our own bat populations. Read more about the grant and white-nose syndrome. 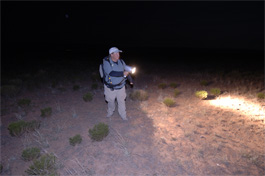 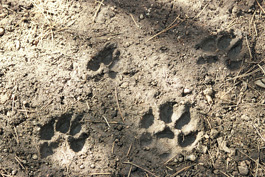 The Arizona Game and Fish Department on Aug. 29 submitted its official comments on the U.S. Fish and Wildlife Service’s draft Mexican wolf recovery plan which, when finalized, will outline a science-based strategy for continuing the successful reintroduction of Mexican wolves in its historic range. The updated draft plan, released in June, continues to build upon the successful recovery program, which has seen the Mexican wolf population more than double since 2009 to at least 113 wolves in the wild. Read more about the draft recovery plan and the AZGFD’s comments.

This summer four Terrestrial Wildlife interns with the Nongame Birds and Mammals Program performed occupancy surveys for the endangered New Mexico Meadow Jumping Mouse by deploying and monitoring over 2,000 track plates in the White Mountains of Arizona. This novel and noninvasive monitoring technique utilizes inexpensive, off-the-shelf items (like shoe boxes, contact paper and carpenters chalk) to identify the presence of jumping mice by their very unique footprint. As a result of these surveys, jumping mouse presence was confirmed at seven previously unknown stream locations on 94 different track plates. In addition to track plating, the team assisted Region 1 with repairing seven miles of fencing further assisting the recovery of jumping mouse habitat. The data collected from this project is already offering guidance for recovery efforts by informing researchers on species distribution and connectivity, and has provided a greater understanding of jumping mouse life history and habitat needs. — Kurt Licence

For the past several years the Arizona Game and Fish Department has participated in a multistate Desert Thrasher working group, collaborating to launch a regional inventory and monitoring effort of Bendire’s Thrasher, Le Conte’s Thrasher and Loggerhead Shrike — all of which are considered sensitive species by the Bureau of Land Management and state wildlife agencies of the southwestern region of the United States.

Arizona’s primary focus for 2017 has been on the Bendire’s Thrasher. The species is not federally listed under the Endangered Species Act, but it’s considered a species of conservation concern by the U.S. Fish and Wildlife Service and Partners in Flight. Similarly, the Arizona Game and Fish Department has this bird identified as a Species of Greatest Conservation Need.

Partners in Flight has estimated that Bendire’s Thrashers’ numbers are foreseen to drop 50 percent in less than 18 years, while the Le Conte’s may experience a loss of half their population in 28 years. What does this mean? It means we need to gather as much information as possible so that we may better assess the bird’s population status and distribution. This will allow the department and partners to take proactive steps to conserve Bendire’s and other desert thrashers — iconic species of Arizona’s deserts.

Through the Desert Thrasher working group, the Arizona Game and Fish Department collaborated with other states and nonprofit groups to adopt a monitoring protocol and implement surveys across most of the species’ range. We recorded the number of thrashers present and collected vegetation data across a suite of survey plots — important information to help inform future actions on habitat and species management.

In Arizona, efforts in 2017 yielded 71 plots surveyed with a total of 54 individual detections for Bendire’s (we also recorded other target species, such as Loggerhead Shrikes). A big thank you to all our bird surveyors, including biologists who volunteered their time and citizen scientists from the Tucson Audubon Society. — Edwin Juarez and C. Kondrat-Smith

Video of the Month: Canyon Clean Up

Diablo Canyon in northern Arizona is home to nine nests that Golden Eagles may choose to lay their eggs in during any given year — but it’s also a popular area for rock climbers. This video highlights the efforts of the Arizona Game and Fish Department along with volunteers and partner agencies to clean up the canyon by removing bolts and metal hangers from the rock walls to dissuade climbing activity during the eagles’ breeding season. “If you see a nest and you’re thinking about putting some bolts or climbing routes up the wall, reconsider — maybe talk to the agency that’s managing that area and see if it’s a good idea or not,” says Kurt Licence with the AZGFD. Watch the video