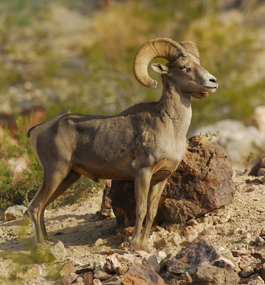 “On my first day of field work, I thought I was going to die. I was a new intern on a bighorn sheep predation study in the Santa Catalina Mountains in Tucson. We hit the trail at what felt like 100 degrees Fahrenheit. Hiking the Pontotoc Ridge Trail, I felt like I had been put on the Stairmaster from hell. Back at the truck, about 13 hours later, I wondered if I would survive the summer.

Fortunately, this internship with the Arizona Game and Fish Department got easier after that. I had lots of practice recording data while on the side of a mountain. I also honed my radiotelemetry skills looking for sheep. It was amazing to sit across a canyon from a group of sheep and see them climb up a near-vertical cliff. In some cases, it was a vertical cliff. I’ve hiked out to some of these sites, and there is no way any person would be able to climb up to the point the sheep reached. I also saw what they eat, chomping down on prickly pear and cholla. I’m still not sure how they deal with the thorns, but they don’t seem to mind.

This internship took me to some really cool places. They were hell to get to, but still incomparable. There is nothing like spending half a day trying to get up a steep ridge line in triple-digit temperatures and then finding a beautiful stand of cottonwoods at the top of a canyon. I don’t understand how they grow up there, but they were the best thing I saw all day. I also had the pleasure of bouldering up a canyon after a rainstorm and finding a hanging garden. I hadn’t seen anything like it in the desert mountains before.

During this great summer internship, I saw and hiked in places I had never known were there. I learned where sheep live, what kind of terrain they like and that they can eat through the worst cactus like it was candy. Most of all, though, I got to spend a summer having fun with great people in great places. Now that the summer is over, I’m back at Northern Arizona University. I’m working toward a biology degree and hoping to work with Arizona Game and Fish again.” –Noah Ratliff

This Wild Life features stories of people, wildlife and the outdoors. Send your story to jhammonds@azgfd.gov. Keep it short (under 400 words).

Arizona is home to three subspecies of bighorn sheep. The two desert subspecies are leaner and smaller than their Rocky Mountain cousin, but all three can be very difficult to tell apart. And there is no one point on the map where we can say, “Desert sheep end here and Rocky Mountain sheep start there.” Rather, there is a gradual transition from one subspecies to another, with a fair amount of overlap along the way — a phenomenon known to biologists as a “cline.” –Randall D. Babb 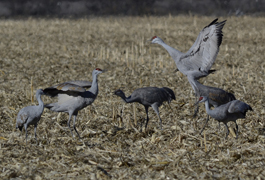 Many people find sandhill cranes fascinating. For one thing, they are subtly lovely to look at. Gray overall, some birds sport rust-colored staining on their outer feathers. Their very long neck is an elegant exclamation mark above a slender body and long, dark gray legs. Sandhill cranes have two more features that distinguish them from other birds: tufted feathers going over the rump and a bright red, bald forehead.

People say, “Bald is beautiful,” but does that explain why some can’t get enough of watching cranes? Maybe their fabulous height is part of the attraction. An adult stands 38–48 inches high, has a wingspan of 6–7 feet and weighs 7–12 pounds. But size and beauty aren’t the only things that make sandhill cranes special.

With their migrations, some spanning thousands of miles, sandhills seem to signal the joy of spring’s beginning and the bittersweet beauty of autumn. Most sandhill cranes fly north for the summer, spending the season in Siberia, across Alaska and through Canada to western Quebec and down into the northern states. They winter in the southern United States (including Arizona) and Mexico, where they find playas and slow-moving rivers near the grain fields that provide much of their diet. In addition to eating grain, this omnivorous bird feeds on other plants, insects and small vertebrates.

Many people love to watch sandhill cranes “dance.” This spectacular courtship ritual includes head bobs, exaggerated bowing and leaps into the air with outstretched wings. Paired cranes are monogamous, but if a mate is lost, the survivor will select another mate as necessary. Adults typically lay two eggs, but it is rare for both young (known as colts) to survive the first year. A sandhill crane reaches reproductive age at 3–5 years and can live 20 or more years in the wild.

Cranes fly with their neck fully extended and legs and feet trailing behind. They make a distinctive, loud trumpeting call that can be heard from a long distance. Listening and looking for cranes is an ancient human activity. Cranes are much older than we are; older than almost all other existing bird species, in fact. The oldest unequivocal sandhill crane fossil is 2.5 million years old.

Perhaps it is this ancient history that calls us, connects us, causes us to look skyward when we hear that rattling cry … makes us crazy about cranes. –Julie Hammonds

Mark Your Calendar: Wings Over Willcox

Explore nature in southeastern Arizona through tours and workshops on photography, geology, history, botany, agriculture, and — the stars of the show — the area’s wintering sandhill cranes and other birds.

Even if you can’t attend Wings Over Willcox, you can still see sandhill cranes in southeastern Arizona this winter. As many as 30,000 cranes winter at Whitewater Draw Wildlife Area. Hearing their rattling calls as they prepare for liftoff at dawn is an experience no wildlife lover should miss. To get there from Tucson takes less than two hours. Travel east on Interstate 10 to exit 331, then merge onto Highway 191 south toward Sunsites/Douglas. At East Rainbows End Trail, turn right. Final access is via a dirt road, which can be a challenge in wet weather. You’ll find viewing decks and scopes, an interpretive trail, a restroom and an educational kiosk. Entrance is free.

Join trained docents on a 2-mile interpretive walk over easy terrain along the San Pedro River, which features some of the richest wildlife habitat in the United States. Wear appropriate attire for hiking and weather conditions. Bring at least one quart of water per person.