Walk on the Wild Side: Lost Dutchman State Park 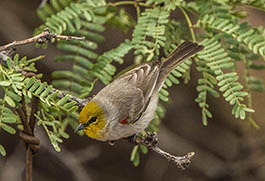 Sitting at 2,000 feet in elevation, Lost Dutchman State Park is located near Apache Junction in the Sonoran Desert foothills and is a great place to take in the scenic views of the Superstition Mountains. Six trails, which range from a half mile to four miles, include options with interpretive signage and all are a gateway into the Superstition Wilderness.

Wildlife in the area includes the full spectrum — from birds to large and small mammals to reptiles in warmer months. Visitors might get a glimpse of Costa’s hummingbird, Gambel’s quail, cactus and rock wrens, mule deer, grey fox, Harris’ antelope squirrels, desert spiny lizards, Gila monsters and different species of rattlesnakes. And after winter rains, the desert wildflowers have been described as “spectacular.”

The park is open year round, and features day-use areas and camping sites. To get there: From Apache Junction, go northeast on the Apache Trail (AZ 88) for five miles to the park entrance. 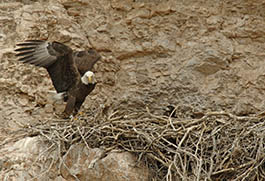 Each year as part of its highly successful program to manage and conserve bald eagles in the state, the Arizona Game and Fish Department asks outdoor recreationists, aircraft pilots, drone operators and motorized paragliders to help this magnificent bird. Various land and wildlife management agencies close areas around breeding locations during the birds’ breeding season to protect the state’s 67 breeding pairs of bald eagles. Some closure areas are located near popular recreation sites. In December, Arizona bald eagles began rebuilding nests in preparation for laying eggs. The birds nest, forage and roost at the rivers and lakes that have become some of Arizona’s most popular recreation spots, and this time of year can be challenging for the birds. Read more 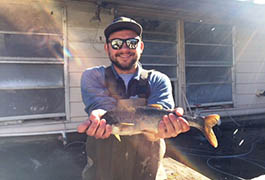 The Bubbling Ponds Hatchery is one of AZGFD’s six hatcheries, and broodstock populations of three native fish species, the Roundtail Chub, Colorado Pikeminnow, and Razorback Sucker, are maintained at the hatchery to produce thousands of fish that are stocked into the wild to support recovery and conservation efforts. Last month fish in the Roundtail Chub broodstock pond were “harvested,” meaning the pond was drained and all of the fish were collected and sorted. The sorting process consists of separating fish by size class and also separating chub from other aquatic species that accidentally got into the pond. Read more

Species Support: Be a Hero for Wildlife 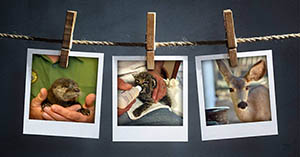 The Arizona Game and Fish Department’s Wildlife Center treats sick, injured or orphaned wildlife. Some can be released to the wild, but those that can’t require continued care, either as “wildlife ambassadors” for educational presentations at local schools and community events, or for placement in a zoo or wildlife sanctuary. The animals pictured above were all rescued in 2017. The department receives no Arizona tax dollars to operate, and the cost of feeding and caring for these animals often outweighs the available funding. We’ve set a goal to raise $10,000, and there are two easy ways you can help: Visit the website or text CRITTER to 41444.

Standing at less than 11 inches tall, the American kestrel is a mighty bird of prey, yet the future of this fierce little falcon is uncertain, as populations are on the decline nationally. Last year AZGFD announced its participation in a program to enlist the help of landowners to assist biologists in collecting data to be used to conserve this important species — and it’s not too late for others to help out. There are now more than 70 kestrel nest boxes around the state and more are being added weekly. Nest boxes can be installed in open fields, deserts, grasslands, meadows, wetlands or sparse woodland. Participants monitor the nest boxes at least twice each season: once when there are likely eggs and again within 30 days. Read more

After an absence of more than 70 years, the endangered Gila topminnow has reappeared in the Santa Cruz River in northwest Tucson, fish surveys conducted in November confirm. Scientists were hopeful native fish would return to the river near Tucson after the river’s water quality significantly improved following upgrades to wastewater treatment facilities releasing effluent (highly treated wastewater) into the river at Agua Nueva and Tres Rios treatment plants in 2013. The native Arizona species, listed under the Endangered Species Act, was rediscovered in the Santa Cruz River near Nogales, Ariz., in 2015. Both sections of the river where the fish reappeared depend on releases of effluent, demonstrating the critical role this water plays for the river’s health. Read more

An Arizona man has been convicted and fined for violating the Lacey Act, the U.S. Fish and Wildlife Service announced Dec. 13. Jonthan Sampson Benson pleaded guilty before U.S. District Judge Steven P. Logan on three counts of Lacey Act violations. The court then ordered him to serve five years of probation and pay $2,225 restitution to the Lacey Act Reward Account and $2,500 to the Arizona Game and Fish Wildlife Theft Prevention Fund. Benson was also ordered to forfeit all wildlife to the government, which includes two Gila monsters, two prairie rattlesnakes, two tiger rattlesnakes, one speckled rattlesnake, one Hopi rattlesnake and one Arizona black rattlesnake. Read more 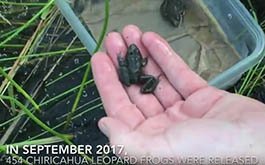