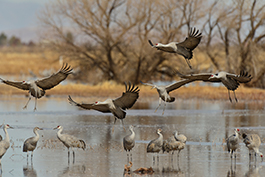 Those who enjoy wildlife viewing will want to put Whitewater Draw near the top of their list. The wildlife area is managed to enhance wetland habitats and provide waterfowl habitat, management for plains leopard frogs, and wildlife viewing.

The area is probably best known as a wintering area for migrating sandhill cranes. Many people visit each winter to experience the sights and sounds of more than 20,000 of these unique birds. The cranes spend each night standing in Whitewater Draw’s shallow waters to evade predators, and then fly out each morning to feed in the surrounding area before returning in the afternoon and evening.

The sandhill cranes begin leaving Whitewater Draw for their return migration in mid to late February. As of last weekend, there were still several thousand cranes there, but that number will diminish as we get further into spring. The Arizona Game and Fish Department has a set up a live “crane cam” on its website where the public can view these magnificent birds in season. Whitewater Draw’s waters also attract many kinds of ducks, geese, herons, egrets, shorebirds, gulls and terns. Small mammals also inhabit the area.

Whitewater Draw Wildlife Area is located near the town of McNeal, Ariz. in Cochise County, off of U.S. Highway 191. 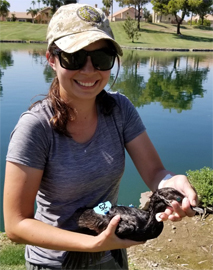 In early 2017, AZGFD began a study of the state’s two species of cormorant – neotropic and double-crested – both of which are federally protected under the Migratory Bird Treaty Act. Under those protections, cormorant populations have flourished nationwide, competing with other wildlife for a bounty of local fish at AZGFD’s community fishing waters and privately stocked residential lakes.

Biologists want to better learn how the growing populations of cormorants are connected to the landscape, their migration patterns, and what impact – if any – their increasing numbers are having on other wildlife, including area fish. In late summer, AZGFD researchers placed numbered, colored tags on the wings of birds near the Ocotillo and Sun Lakes communities in south Phoenix. More birds will be safely trapped, tagged and released across the metro area and in other areas of the state in the future. The public was invited to provide assistance in monitoring and recording the location of any tagged birds, the date and time of the observation, and wing tag color and number.

Although the quarterly counts are concluding, the public is still encouraged to report observations of particular areas where cormorants are feeding, or observations of groups of cormorants with tags. Leave a message with details at 623-236-7301.

The department will use the data to improve aquatic habitats and to assist in developing management practices that will benefit all wildlife and address potential impacts to local fishing resources. Read more 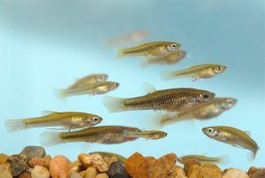 After an absence of more than 70 years, the endangered Gila topminnow has reappeared in the Santa Cruz River in northwest Tucson.

Scientists were hopeful native fish would return to the river near Tucson after the river’s water quality significantly improved following upgrades to wastewater treatment facilities releasing effluent (highly treated wastewater) into the river at Agua Nueva and Tres Rios treatment plants in 2013. The native Arizona species, listed under the Endangered Species Act, was rediscovered in the Santa Cruz River near Nogales, Arizona in 2015. Both sections of the river where the fish reappeared depend on releases of effluent, demonstrating the critical role this water plays for the river’s health.

Scientists and residents have eagerly awaited the fish’s return as the river’s water quality continually improves in this reliably flowing stretch. Read more 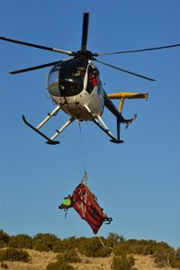 For the first time in more than 150 years, elk are leaving their hoofprints on West Virginia soil. On March 3, dozens of elk that were captured and quarantined in January east of Flagstaff were loaded into a livestock trailer and transported nonstop to a release site in the Tomblin Wildlife Management Area in southwest West Virginia.

The project was an immense undertaking involving staff and volunteers from the Arizona Game and Fish Department and the West Virginia Division of Natural Resources, representatives from the Arizona Elk Society and the Rocky Mountain Elk Foundation (RMEF), and capture crew from Quicksilver Air Inc. The department also coordinated with three major private landowners and the Hopi Tribe in advance of the capture.

This historic conservation project marks only the second time Arizona has provided elk to another state. In 2000, Kentucky’s elk restoration project received a boost with 26 animals that were captured near Raymond Wildlife Area. At the time, Kentucky hoped to build a statewide herd of between 7,200 and 8,200 elk. Today, officials estimate there are between 10,000 and 15,000 elk in the Blue Grass State. Read more 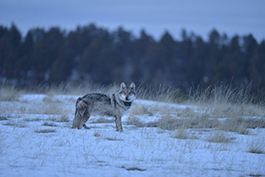 The Mexican Wolf Interagency Field Team (IFT) completed its annual year-­end population survey, documenting a minimum of 114 Mexican wolves in the wild in Arizona and New Mexico at the end of 2017. This number includes 26 pups that survived to the end of 2017, accounting for a slight increase over the estimated 113 wild wolves in 2016.

The survey results come from on-the-ground population data collected by the IFT from November 2017 through January 2018, as well as from aerial surveys conducted in January and February of this year. The results from the aerial survey, coupled with the ground survey conducted by the IFT, confirmed: 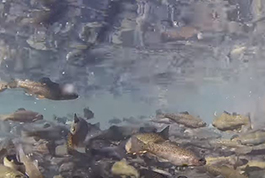 The Arizona Game and Fish Department is scheduled to stock around 55,000 Apache trout of a catchable size from its Silver Creek Hatchery from May through September.

This year, AZGFD is expecting to receive about 200,000 Apache trout eggs. Video 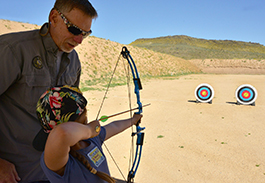 In this video, the Arizona Game and Fish Department Development Branch provides water for wildlife by building a new water catchment in the desert south of Tucson.