The biggest birds patrolling Arizona’s skies are California condors. These very rare birds can be mistaken for ravens or vultures but dwarf them in size. With a 9.5-foot wingspan, a mature condor makes even a mature golden or bald eagle look small.

When fully grown, condors weigh 17–26 pounds. Although full-sized by the time they can fly, condors take six to eight years to reach breeding age.

These big vultures handle parenting as a team, nesting in a cliff-side cave or ledge and laying one egg, which takes 54 to 58 days to hatch. A nestling can fly after six months but continues roosting and foraging alongside its parents until its second year.

Black overall but visibly white under the wings and on the belly, condors sport a naked head covered in orange- or salmon-colored skin (mature birds) or gray skin (young birds). They seem to live in the skies, soaring and gliding along with flat wings outstretched, looking for indicators of their next meal. Condors subsist entirely on carrion.

Condors are long-lived, up to 60 years or so, placing them among the world’s longest-living birds. Once nearly extinct, they are on the federal list of endangered species. But these rare birds are being reintroduced to the wild. About 80 birds, most wearing a numbered wing tag, can be seen in the skies of northern Arizona (see next story).

Walk on the Wild Side: Where to See Condors 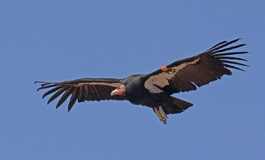 Atop the Vermilion Cliffs in northern Arizona is where California condors are released in our state. The release takes place every year on Public Lands Day, the last Saturday in September. A viewing site near the base of the cliffs is a good place to see the release or look for condors year-round. It is located 2.5 miles north of U.S. Highway 89A on BLM 1065.

In winter months through May, condors also frequent the Colorado River corridor near Marble Canyon. During the summer, a large percentage of the Arizona–Utah population soars up to Zion National Park and the adjacent area on Cedar Mountain in southern Utah. But condors are also seen frequently at the South Rim of the Grand Canyon in summer.

No matter where or when you look for condors, binoculars or a spotting scope will make your time more productive. –Allen Zufelt, Condor Program Coordinator, Arizona Game and Fish Department

AZGFD continues its “Be a Hero for Wildlife” text donation campaign

The Department this week began phase 2 of its “Be a Hero for Wildlife” text donation campaign, following a soft rollout at the AZGFD Outdoor Expo.

The campaign encourages the public to donate to AZGFD’s Wildlife Center by texting CRITTER to 41444 from any smartphone. The donations will support the care of sick, injured, orphaned or confiscated wildlife at the center, as well as care for the “animal ambassadors” used for educational outreach statewide.

Donations will help defray costs, as some animals require extensive medical treatments, X-rays, monitoring and specialized care. In the past few weeks alone, a bobcat kitten, deer fawn and baby otter have been brought in, and the costs of caring for and trying to place those animals are considerable.

The Department continues to remind the public to “leave baby wildlife alone” and “keep wildlife wild.” 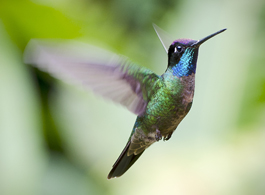 International Migratory Bird Day is May 13. To celebrate, here are some fast facts about these feathered wanderers.

When birds migrate between nesting and wintering sites, they don’t just stop anywhere; they rely on a handful of resource-rich and strategically located sites. According to migratorybirdday.org, birds may double their body weight at these stopover sites as they acquire the energy-rich fat stores needed to fly thousands of kilometers across continents and oceans.

The riparian habitat along the San Pedro River in southern Arizona is one well-known stopover site. But many other riparian areas, wetlands, and even urban parks and yards throughout the state also give birds places to rest and feed during migration.

One “neotropical” migrant that spends time in Arizona is the magnificent hummingbird. This large hummingbird breeds in mountains, primarily from central Arizona and New Mexico south to western Panama. It lives in montane pine and oak forests and in adjacent wooded canyons.

The grassy lawns of Green Valley Park transform into a carnival of wildlife and hands-on outdoor activities for all. Parents and kids can fish, play games, and get a close-up look at wildlife. There will be booths from a variety of conservation groups. Join us for this annual cooperative event between the Arizona Game and Fish Department, Mogollon Sporting Association, U.S. Forest Service and Payson Parks, Recreation and Tourism Department.

Eyes on the Wild: Two Tips for Better Wildlife Photos

Also, control the depth of field to focus attention where you want it. Wildlife photography is not like shooting a landscape, where you want everything in focus. Here, often you want the background to blur. Use larger apertures (a smaller f-stop number) and closer focusing distances to produce a shallower depth of field. This technique will make your wildlife subject the center of attention, just as it should be. –George Andrejko, photographer, Arizona Game and Fish Department

What happens when an elk gets too close to a hammock? Watch the video