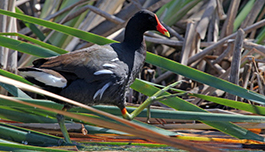 The common gallinule are found in freshwater or brackish marshes and have long toes that help them to walk on floating vegetation and muddy areas. Photo courtesy of the U.S. Fish and Wildlife Service

Named after a mountain man who traveled throughout Arizona in the early 1800s, the Bill Williams River National Wildlife Refuge in Parker is situated in a transition zone between Mojave and Sonoran desert. Containing one of the last stands of natural cottonwood-willow forest along the lower Colorado River, the refuge draws a variety of Neotropical migratory birds from Central and South America migrating to their breeding grounds. In addition, it’s home to 355 species of birds, 34 documents reptiles, 40 species of butterflies, and 57 species of mammals and seven amphibians.

Activities include two trails including a one-fourth mile interpretive trail that’s universally accessible, kayaking and canoeing, and a self-guided auto tour (4×4 vehicles are recommended). The refuge is managed by the U.S. Fish and Wildlife Service, and is closed on federal holidays.

To get there: From Parker, go 18 miles north on Highway 95. From Lake Havasu City, go 15 miles south on Highway 95. The refuge office is between mile markers 160 and 161 on the lake side of the highway.

AZGFD Biologists in the News 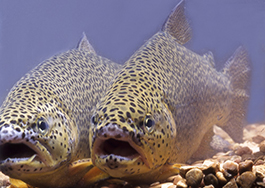 The Apache trout is the state fish of Arizona

Cronkite News detailed the efforts of AZGFD and its partners to conserve and protect the Apache trout, which is only found in Arizona. “To some conservationists, analyzing Apache trout populations, understanding threats to the fish and improving stream conditions is a ‘biologist’s dream’ — but it requires a huge effort,” states the article. Cronkite News spoke with Bryan Giordano and Mike Lopez about how they are tasked with the Apache trout’s survival in Pinetop. Read the article

“As imposing as they appear, eagles are vulnerable birds in the weeks after hatching in or around February.” The Arizona Republic joined our raptor specialists as they got up close with eaglets to weigh, measure and band them for future identification. This careful work has been a key part of the bald eagle’s recovery in Arizona. Today there are about 85 bald eagle nest sites in the state, compared with the three to four known sites in the 1970s. Read the article

When undercover investigators from AZGFD served a search warrant near Yuma in May they found dozens of plastic containers stacked throughout the house containing 54 snakes in total. Fox 10 talked with AZGFD biologists about the illegal reptile trade as well as how AZGFD works to conserve and protect all species of wildlife in Arizona. Watch the video 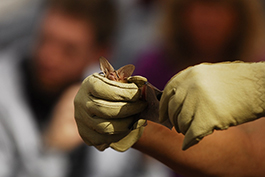 Arizona is home to 28 species of bats, many of which live and forage right in our own backyards. Here’s your chance to see these fascinating creatures up close. These events are limited to 25 people, and you must register online in advance.

Tour one of the pre-eminent wildlife centers in the U.S., and learn about Arizona’s diverse bat fauna with this special bat netting event. Get more information and register online.

The Arizona Game and Fish Department is offering a unique opportunity to view one of Arizona’s most iconic arid land animals, the desert bighorn sheep, on a three-hour morning boat tour on Canyon Lake. An AZGFD biologist will accompany each boat of participants on the outing. This event has a maximum capacity of 20 people, and you must register online in advance.

Video of the Month: Arizona Elk Help Re-establish Other Populations 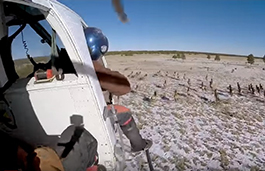 Earlier this year, AZGFD worked to capture elk in order to help establish a new population in West Virginia

Over 100 years ago, Arizona’s elk population was down to zero, but there’s good news: Now it’s about 45,000 strong after Yellowstone National Park helped Arizona re-establish elk. Watch our video to learn about how Arizona is returning the favor to West Virginia.