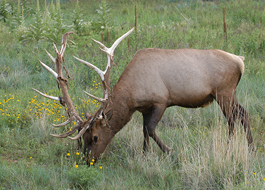 “As a wildlife area host at Sipe in the White Mountains, one of my favorite things to do in the mornings is follow the elk once they start moving away from the field behind our RV”. They were headed for the McKay Reservoir on this particular morning.

I usually let them get out of sight and then move on an angle from them so I’m not spotted. As I was following them, I heard a cow mewing in the loud, constant squeal they usually make when in trouble. My immediate thought was that while jumping the fence, she had gotten caught on the wires.

I went back for a big pair of pliers to cut the fence, then followed the noise. With binoculars, I glassed the area and found the cow by sound. Her twins had strayed off, and in typical kid fashion, they were not moving back to her fast enough. Once mom had them in sight, she quieted down. A happy ending.

One evening, my son, his wife and I walked to the McKay Reservoir duck blind to await the evening elk herd. We could see them gathering under the tree line just south of the reservoir fence. Out of the corner of my eye, I caught movement and turned slightly to see what it was.

A coyote had crossed the dam and was moving slowly toward where the elk were now coming over the fence. It moved close to the trail the elk usually take to come down to Sipe’s south meadow. It reared up slightly in the tall grass to get a better view, then lay down for a nap.

A cow and calf reached the trail, with mom leading the way and the calf 40 or 50 feet behind her. The coyote started slowly walking toward the calf. All at once, the calf saw it. The calf let out a call for assistance, and mom headed for the coyote. She cut the coyote off so it had nowhere to go but toward the south and the herd. Several other cows ran the coyote around the end of the reservoir and under the fence.

Interested in volunteering? Help is always needed on projects at the four wildlife areas in the White Mountains, including Sipe. Contact wildlife area manager Steve Iker at 928-333-4518 or SIker@azgfd.gov 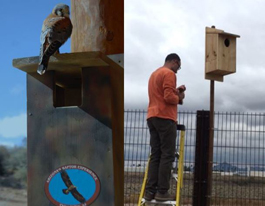 The Arizona Game and Fish Department this year began contributing to a national effort to monitor a declining bird of prey, the American kestrel. The goal of the study is to conserve and monitor kestrels in Arizona while providing rewarding “citizen science” opportunities for the community.

Long-term studies such as USGS’s Breeding Bird Surveys, Audubon’s Christmas Bird Counts, and migration counts have documented up to a 66 percent decline in the kestrel population. Additional data is needed on this fierce little falcon found across North America.

So far, Game and Fish has partnered with more than 30 land managers, including private, tribal, nonprofit, government, and other nongovernment entities interested in contributing to the study. Nearly 50 nest boxes are up around the state, and more are added every week.

Although kestrels are the target species, it is not uncommon for screech owls, woodpeckers, bluebirds and other cavity nesters to use nest boxes.

If you are interested in participating in this exciting citizen scientist project, or for more information, contact Kurt Licence at raptors@azgfd.gov.

Walk on the Wild Side: Lizard Walks at Boyce Thompson Arboretum

On a summer visit to Boyce Thompson Arboretum State Park, lizard walks (and other weekend nature tours) are included with the daily admission of $12.50 for adults and $5 for ages 5–12. Expert guides help visitors find and learn about Arizona’s most common, colorful and charismatic little reptiles. These volunteer guides are allowed to safely catch-and-release lizards to educate the public, so bring a camera for close-up pictures, along with a guidebook (if you have one), some water and all your questions. 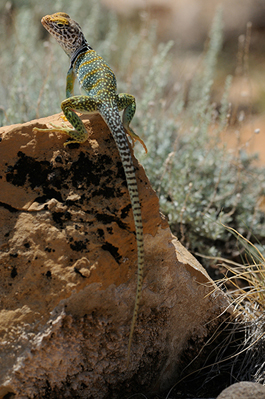 Distribution: Eastern half and parts of west-central Arizona, up to 8,000 feet

Notes: The Eastern collared lizard is a fierce hunter with powerful jaws. It is even capable of sprinting upright — body at a 45-degreee angle, front legs raised and tail lifted for balance. Perhaps because its tail is used so dynamically, the lizard is less likely to lose it during an escape. It’s primarily carnivorous, and much of its day is spent in pursuit of prey, although it also enjoys basking in the sun. The male is territorial. After mating, a female buries up to 14 eggs (four to six on average), which hatch in summer or early fall. Babies are only about 1.5 inches long, excluding the tail.

Mark Your Calendar: Watch Wildlife in the High Country

Every third Saturday of the month from May through August, enjoy a guided watchable wildlife experience in the high country near Flagstaff. Join local wildlife experts for tours of natural areas such as Pumphouse County Natural Area and Rogers and Marshall lakes. Hosted by the Arizona Watchable Wildlife Experience, these tours are free and open to all ages. For details, call Arizona Game and Fish at 928-214-1252 or visit www.azwatchwildlife.com. –Shelly Shepherd

Did you know Arizona has a TV show about the state’s wildlife, wild places, and outdoor recreation?