Walk on the Wild Side: Mormon Lake

Mormon Lake is a nice getaway area when the weather heats up in Arizona’s lower elevations. Located about 25 miles south of Flagstaff on Lake Mary Road (Forest Highway 3) at an elevation of more than 7,000 feet, it’s the largest natural lake in Arizona. However, water levels can vary from year to year. In drought conditions the lake can dry up completely, and even in wet years it resembles a shallow marsh more than a lake.

With a blend of habitats that includes wetlands, grassland, coniferous forests and cliffs, the area offers beautiful scenery and excellent wildlife viewing. There is an overlook from the highway on the east side of the lake, and panoramic overlooks on the west side of the lake can be reached via a hiking trail from Double Springs Campground. Either area provides a prime observation point for scanning the lake bed and native grasslands. A scenic drive circles the lake.

Herds of elk and deer can be seen in the early morning or at dusk. You also might see pronghorn, songbirds, waterfowl, hawks and possibly bald eagles. In the winter, the lake supports a sizeable concentration of wintering bald eagles.

In addition to wildlife viewing, the area offers summer activities such as hiking, biking, picnicking and camping (and cross-country skiing in the winter). Two developed campgrounds — Dairy Springs and Double Springs — are located among the cool, picturesque groves of ponderosa pines and white firs. They are generally open from about May until mid-October (weather permitting) and charge a fee. Mormon Lake Lodge on the lake’s western shore offers a restaurant, store, mountain bike rentals and fishing.

To get there from I-17 in Flagstaff, exit southeast on Lake Mary Road (Forest Highway 3) and take that to the Forest Road 90 intersection. Turn west on FR 90 — it circles around the west side of the lake and eventually returns to Forest Highway 3.

Whether you are a professional biologist or backyard naturalist, we could use your help in documenting land snails in our neighborhoods and wild places. The Arizona Game and Fish Department recently developed a new project for the Internet-based iNaturalist database “Land Snails of Arizona”. This is a great opportunity for the public, students, volunteers, employees and agency partners to get involved in citizen science.

Just install the iNaturalist app (https://www.inaturalist.org ) on your smartphone or tablet (both Apple and Android are supported) and join this project to record snail observations while you are out hiking, hunting or exploring the outdoors. It’s easy to use, and helps further our knowledge on land snail distributions, some of which are considered possibly rare or at risk.

One of the snail species that we are focusing this effort on is the Phoenix talussnail (Sonorella allynsmithi) that is found in numerous desert mountain preserves and hillsides in the Valley of the Sun. The Phoenix talussnail is one of a dozen Arizona snails that the U.S. Fish and Wildlife Service will be evaluating in another five to seven years on whether it should be federally listed as threatened or endangered, or not. The more data we have available on this species, the more informed we will be on its status and distribution.
— Jeff Sorensen

Hummingbird feeder owners are being asked to watch for bats as part of a study throughout southern Arizona. AZGFD, the U.S. Fish and Wildlife Service and local researchers are seeking volunteers to monitor the use of their home hummingbird feeders by nectar-feeding bats.

Volunteers will be asked to check their hummingbird feeders two or three times per week for signs of bat use and to provide information on bat activity at their location via a Web-based form. Photos of bats feeding are also being sought for species identification.

In southern Arizona, there are two bat species that consume nectar: the lesser long-nosed bat, which is listed as federally endangered; and the Mexican long-tongued bat, an Arizona species of concern. These gentle, beneficial pollinators live in caves and mines. During summer nights, they travel in search of food, and over time, have found their way to hummingbird feeders in southern Arizona.

In part due to project volunteers detecting significant increases in the lesser long-nosed bat population, the U.S. Fish and Wildlife Service proposed removing the species from the federal endangered species list earlier this year. The delisting of the species would mean a continued need to monitor bat activity and population levels. For more information, visit the hummingbird feeder monitoring program website at www.maranaaz.gov/bats
— Mark Hart 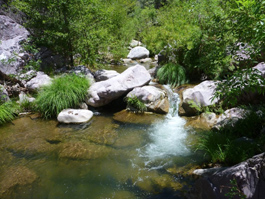 Biologists with the department’s Conservation and Mitigation Program (CAMP) recently surveyed lower Haigler Creek, a tributary to Tonto Creek, to monitor the population of Roundtail Chub. The survey showed this native fish persisting throughout the surveyed reach. The CAMP has future plans to use these fish to expand their population into upper Haigler Creek. Read more about the project.

Our biologists are conducting a research study to determine the most accurate and cost-effective way to measure elk abundance in different parts of Arizona. See a short video about the project (it includes some cool aerial footage of elk). 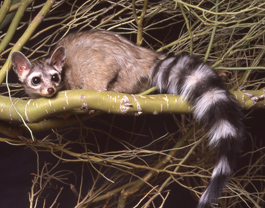 Did you know the state mammal of Arizona is the ringtail? It was so designated by a vote of Arizona’s schoolchildren in 1986. The ringtail is a cat-sized carnivore resembling a small fox with a long raccoon-like tail. The tail is about the length of the head and body with 14 to 16 black and white bands and a black tip.

Ringtails are shy and primarily active at night. Sometimes mistakenly called “ringtail cats,” they are related to raccoons. The ringtail feeds on fruits and insects as well as small reptiles, birds and mammals. It is especially fond of white-throated wood rats (“packrats”) and will live in their dens after eating them. The ringtail is found throughout the state, preferring rough, rocky areas with caves and crevices.

Arizona’s endangered black-footed ferret population in 2016 celebrated the 20th anniversary of its reintroduction to Arizona with the release of more animals onto the Double O Ranch near Seligman, the latest private property owner to sign a Safe Harbor Agreement to host this endangered species on its private land.

A Safe Harbor Agreement is a conservation option that aims to enlist the help of non-federal landowners to conserve species. It is hoped the new partnership with the Double O Ranch will lead to the establishment of Arizona’s third population and contribute to national recovery goals.

The species was thought to be extinct until a small colony of ferrets was discovered in Wyoming in 1981. Disease outbreaks reduced this population to about 18 individuals, which were captured to begin a captive breeding program to save the species. Before reintroduction, the last black-footed ferret in Arizona was found in 1931 in an area between Williams and Flagstaff.

The descendants of the original 18 ferrets have now been introduced into reintroduction sites across the west, including the Aubrey Valley outside of Seligman, Ariz. In 2008, Aubrey Valley was declared a successful reintroduction site by the U.S. Fish and Wildlife Service as the population had become self-sustaining and no longer required augmentation.

Today, biologists estimate there are a minimum of 800 to 1,000 individual ferrets living in the wild.