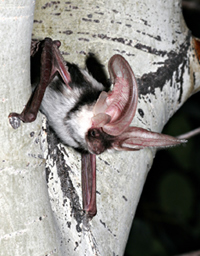 Arizona is home to 28 species of bats, more than almost any other state. Bats are the only true flying mammals and are valuable human allies. Worldwide, they are primary predators of vast numbers of insect pests, saving farmers and foresters billions of dollars annually and helping to control insect-spread human diseases. For example, large colonies of Mexican free-tailed bats (Tadarida brasiliensis) eat hundreds of tons of moths each week, especially the moths that prey on cotton crops.

Although bats play key roles in keeping insect populations in balance, they are North America’s most rapidly declining land mammals. Declines are often caused by human fear and persecution, and each of us can help by learning how to live with these animals.

Potential Conflicts with Humans and Pets

While some people appreciate bats and the ways they benefit us, others fear bats because a small percentage of them can expose humans and pets to rabies. Bats should always be kept out of places where people live indoors. Bat guano (feces) can present disease and odor problems. However, bats are generally harmless to humans and are extremely beneficial for controlling insects and mosquitoes and pollinating some plants. Bats are vulnerable to disturbances by people because of their roosting habits and slow reproductive rate. 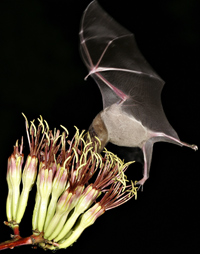 If bats are in an area, it is probably because they are finding food, water or shelter.

Bats should never be allowed to remain in human living areas. However, bats roosting on the porch, in the yard, or in a bat house are far more beneficial than harmful, and the small amount of guano can be cleaned up or used as fertilizer, in exchange for the reduction in flying insects and mosquitoes. The following ideas can help you coexist with bats or exclude them if necessary.

Bat inside a building

A bat inside a building is probably just lost.

Bat on a building during the day

Migrating bats may roost temporarily as they move through an area. This happens most often during spring and fall. Bats roost in cracks, crevices, beams or holes.

Bat on the ground 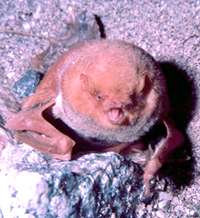 A bat on the ground that acts sick or unable to move may have rabies.

If a bat is injured or a baby bat is on the ground, then contact the local Arizona Game and Fish Department office for instructions. NEVER handle a bat with bare hands.

At least seven species of bats roost in crevices under some bridges in Arizona.

Bats are protected by state law, and disturbing a colony of bats where babies are present can result in dead bats and large fines. Bats reproduce slowly compared to other small mammals, and their benefits usually outweigh any harm they might cause. Bats should never be allowed to remain inside human living areas, but bats outside can be tolerated and even encouraged.