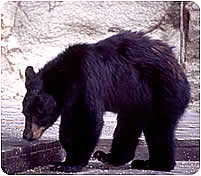 The black bear is the only bear species still found in Arizona. It is the smallest and most widely distributed North American bear. It lives in most forest, woodland and chaparral habitats, and desert riparian areas. Black bears generally roam an area of 7 to 15 square miles.

Conflicts associated with black bears include public safety concerns and possible property damage. Most conflicts are the result of people unintentionally feeding bears, most often by allowing them access to household/campsite garbage or bird feeders. They raid dumpsters, garbage cans, grills, and campsites looking for an easy meal. They might enter a building by breaking screen doors and windows to look for food they smell. Although uncommon, black bear attacks on humans occasionally occur, especially in areas where they come into frequent contact with people and their food.

In the fall, bears must consume about 20,000 calories each day to store enough fat to last through the winter season when food is more scarce.

Bears may visit areas of human use because they find food. Food can include unsecured garbage, birdseed, pet food, fruit trees and some gardens. Drought, wildfire, and urban development can cause bears to roam farther in search of new food sources. Young bears sometimes travel long distances in search of an area not already occupied by another bear.

What Should I Do If I See a Bear?

Black bears should always be considered unpredictable and potentially dangerous. A black bear will usually detect you and leave the area before you notice, unless the bear has been conditioned to people and their food. If you live in black bear country, take responsibility for not attracting them. Always work with your neighbors to achieve a consistent solution to the problem situation, and keep in mind that doing a combination of things is better than doing just one.

If you see a Bear, or it Approaches you

Black bears usually avoid people, but if they start to associate people with food they may become aggressive. On the rare occasion that a black bear becomes aggressive, do the following

Bears can be common at high elevations where food is plentiful. Bears that must be removed are relocated, or may be euthanized if they are considered too dangerous, have lost their fear of humans, or continue to get into conflicts with people. Following removal or relocation, the homeowner might experience more problems from a different bear if the original attractant is not eliminated. Relocating a bear is traumatic for the animal and does not guarantee it will live. Some are killed by bigger, older bears that already live in the relocation area. Removal usually can be prevented. If you live in black bear country, take responsibility for not attracting them. Follow the tips below to allow bears and humans to coexist while avoiding negative interactions.