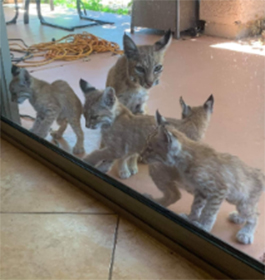 Bobcats are common throughout Arizona at all elevations, especially in Sonoran desert, rimrock, and chaparral areas, and in the outskirts of urban areas where food is readily available. Bobcats are generally seen alone, but groups may consist of mating pairs, siblings, or mothers with kittens. Bobcats are most active around sunset and sunrise, and it is not uncommon to find one napping under a shrub in a brushy backyard. Individual bobcats will defend a territory of one to 12 square miles.

If you see a bobcat near your home, there is no need to panic. Bobcats rarely attack people, and most human attacks have been related to rabies.. It is more likely that bobcats are attracted to your yard because it has abundant wildlife, domestic birds, small pets, water, and shade or other shelter. If you have small pets, they need to be protected from bobcats and other predators. Keep small pets indoors, in an enclosed area with a roof, or on a leash when outside (a 6-foot tall fence is not necessarily good protection as bobcats are good jumpers and climbers). Domestic birds should be kept in an enclosed area with a sturdy roof, and do not spread seed that attracts other wildlife. Feeding bobcats, whether intentionally or inadvertently, can encourage them to become too comfortable around humans which may result in conflicts.

Bobcats may visit an area to find food, water, shelter, or the space they need to live.

You may choose to watch and enjoy a bobcat or bobcat family sharing your yard. However, if you have small pets or livestock, you may want to discourage the bobcat from coming onto your property. Remember, it is always a good idea to keep wildlife wild. If you live in Tucson, visit bobcatsintucson.net to learn more about a study of bobcats along the urban-wild land interface in the Tucson area and report bobcat activity in your area.

To discourage a bobcat, immediately

In the rare occasion that a bobcat bites a person or appears hyperactive, there may be some health concerns. Take the following actions:

Bobcats tend to be abundant where food is plentiful.so even if a bobcat is removed, other bobcats will keep visiting the same area if the attractants are not removed. Bobcats are territorial and often will return to the area of capture post-relocation or may continue to engage in the same behaviors in the release area (i.e., killing poultry). Some bobcats have traveled 30 miles to return to their home range, so removing attractants is critical in reducing conflicts. Homeowners may trap and relocate the animal, but should contact the Arizona Game and Fish Department for an appropriate release location before transporting the animal. For a fee, wildlife control businesses will remove animals from the property. 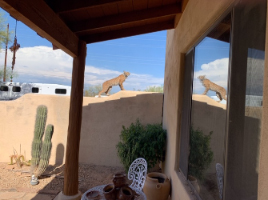 Rabies – Symptoms of rabies can include foaming at the mouth, erratic, hyperactive behavior, and/or fearful, paralyzed and lethargic behavior. Bobcats rarely get rabies. If you see any animal with symptoms of rabies, stay away from it and call 911, your closest Arizona Game and Fish Department office, or a wildlife control business immediately.

Anyone bitten by a bobcat must immediately seek medical attention from a qualified healthcare provider. Whenever possible, the animal should be captured or killed and sent to a laboratory for rabies testing.