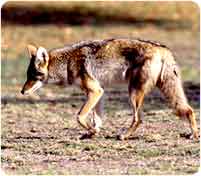 Coyotes are common in rural and urban areas across Arizona. They are often observed at night or around sunrise, and it is not uncommon to find one napping under a shrub in a brushy backyard or neighborhood. Because coyotes are so common in both rural and urban areas, the information below may help to reduce conflicts with them.The Arizona Game and Fish Department does not respond to calls to relocate or remove coyotes unless they are a public safety concern. Those needing assistance relocating wildlife should contact a licensed wildlife removal business.

Conflicts with Humans and Pets

Coyotes are curious, clever and adaptable, and will take advantage of any food source. Yards with abundant fruit on the ground, pet food, unsecured garbage cans or unattended pets such as small dogs and cats are often easy food sources for coyotes.

Coyotes may consider larger or loud dogs to be a threat to their territory and become aggressive toward them. Coyotes have lured and attacked dogs that are off-leash, and bold coyotes have attacked small dogs on retractable leashes.

Generally, coyotes frequent a home or neighborhood if they find food, water, or shelter.

If you see a coyote near your home, don’t ignore it. The coyote may lose its natural fear of humans, which can eventually lead to bold behavior.

How to Scare off a Coyote

In case of an Emergency Call 911

Also call your local Arizona Game and Fish Department office, 8 a.m. to 5 p.m., Monday – Friday excluding holidays. After hours and weekends, a dispatcher is available at 623 236-7201.

Coyotes will return to the same area if attractants such as readily available food and water are not removed. Homeowners may trap and relocate coyotes, but must contact the Arizona Game and Fish Department for an appropriate release location before transporting the animal. Homeowners can also hire a wildlife control business to capture and remove coyotes for a fee. However, coyotes tend to be abundant where food is plentiful, so even if a coyote is removed, other coyotes may keep visiting the same area if the attractants are not removed. Coyotes often return to the area of capture  after relocation or may continue to engage in the same behaviors in the release area (i.e., killing poultry or seeking out prey around bird feeders), so removing attractants is critical to reducing conflicts.

Symptoms of this disease include foaming at the mouth, erratic or hyperactive behavior, and/or fearful, paralyzed or lethargic behavior. Call 911 or your closest Arizona Game and Fish Department office immediately if you see any animal with rabies symptoms.

This viral disease consists of fever, eye and nose discharge, loss of appetite, and coughing. It can be transmitted to and from dogs through bodily fluids. Symptoms can appear similar to those of rabies.

Coyotes can serve as carriers of this type of heartworm, which is spread among dogs by mosquitoes.

Coyotes may be a host for the itch or mange mite. Female mites can burrow into the skin. Coyotes with mange can lose their hair, which can make it difficult for them to control their body temperatures. Mange must be extremely severe before it disables a coyote. Most coyotes can survive with the disease for a long time. Transmission to dogs is possible through direct contact.

Coyotes can carry dog tapeworms, which can cause hydatid cyst disease in humans.