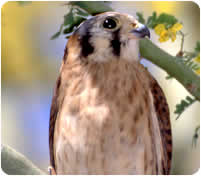 Birds of prey, also called raptors, include hawks, eagles, owls and falcons. This diverse group of birds has a huge range of sizes and behaviors, but the one thing most have in common is a tendency to catch live animals to eat. Some raptors are more likely to live near people than others. For example, red-tailed hawks, Harris’s hawks and great horned owls are common residents in Tucson, Phoenix and other urban areas of Arizona. Cooper’s hawks are also increasingly common residents in Tucson. 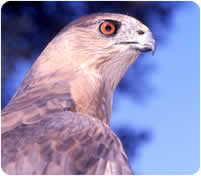 Birds of prey are common in urban areas, and they can be beautiful and enjoyable to watch, as well as helpful for controlling rodents, rabbits and birds. Raptors can occasionally cause problems for people when they pursue small pets or domestic animals, nest in an inconvenient location, leave droppings or meal remains behind, or defend their nests when people get too close. Urban areas can actually be dangerous for raptors as many are injured or killed by running into power lines, being electrocuted by power lines, hitting reflective windows, or being disturbed within their nest area.

Raptors may inhabit an area to find food, water, shelter or the space they need to live. 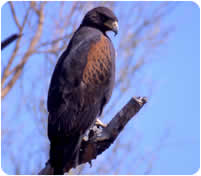 Raptors can be found almost anywhere, but especially near bird feeders or farms because prey animals are attracted to those areas. Because raptors are protected by law, common solutions include tolerating small disturbances, staying away from nest sites until the young are able to fly, and keeping small pets inside or in enclosures with a roof. Attempts to keep raptors off your property may or may not be effective, and harming a raptor will result in a large fine. 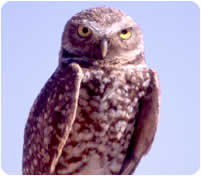 Removal is usually not an option

Raptors are protected by both state and federal laws, and harassing, trapping, killing, or even possessing bones or feathers without the proper permits can result in large fines. Raptors are territorial, and moving a bird to another area may cause it to fight with the current occupants or just fly back using its excellent sense of direction. Most problems are short-term and can be resolved with tolerance or a few small changes. Learning about raptors is the best way to understand how to live with them.

Raptors generally do not have major disease outbreaks because of their solitary nature; most diseases are likely to have been carried by the prey they ate.