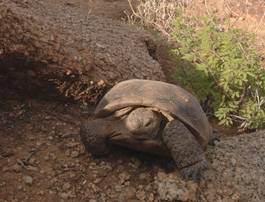 Arizona has 7 species of native turtles, including aquatic and terrestrial species. This fact may be surprising, since many Arizonans can go their whole lives without seeing a turtle in the wild! The goal of the Arizona Game and Fish Department’s Turtles Project is to protect and conserve Arizona’s turtle species through statewide population monitoring, creation and implementation of state conservation agreements, provision of research grants, public education and outreach, and through coordination between state, federal, and private agencies.

In addition to the 7 native turtle species, many nonnative turtle species can be observed through out Arizona’s urban areas. To view the most commonly observed species, please view the Department’s Turtle Identification Chart. Throughout this website, visitors can click on scientific terms to read their definitions in the glossary and gain information on natural history, distribution, habitat, conservation, cautionary measures, and how you can help. 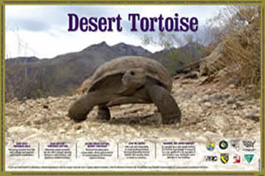 Captive aquatic turtles released into the wild can become established, potentially spread disease to  native turtles and aquatic wildlife, and out-compete native turtles and aquatic species for food and other resources. Do not release captive turtles, and make sure enclosures are secure so that turtles cannot escape. In the Phoenix area, the Turtle and Tortoise Preservation Group provides assistance to owners who are no longer able to care for their nonnative turtles.

Do Not Breed Captive Tortoises. It is illegal to breed captive desert tortoises. The Arizona Game and Fish Department receives hundreds of captive-born tortoises each year. The Department spends a considerable amount of effort and resources finding homes for tortoises. This takes away time for conservation efforts of wild tortoises. Tortoises hatched in captivity cannot be released into the wild. Once in captivity, tortoises must be cared for by humans for the rest of their life.

Participate in the Sponsor-a-turtle Program. The Arizona Game and Fish Department Turtles Project utilizes technical equipment such as radio-telemetry tags, GPS units, and hoop traps to survey and monitor turtle populations statewide. By donating to the Turtles Project, you will help project biologists purchase this gear so that they may continue to plan and implement conservation and management. Download the Sponsor-a-Turtle program brochure.

Obey The Law. The ban on the sale of small turtles, those under 4 inches in length, was enacted to decrease cases of salmonella infections in children. Turtles, like all reptiles, carry salmonella. Humans can become infected with salmonella through contact with feces of a turtle with salmonella. Small turtles seem to pose a high risk of salmonella infection in children because children play with and can put small turtles in their mouths. To find out more about the threat turtles can pose to children, visit the Food and Drug Administration’s Center for Veterinary Medicine website. 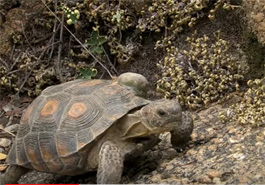 Watch And Enjoy, But Avoid Contact. If you observe a desert tortoise in the wild, it is best to let it continue on its way. Observing tortoises in the wild is an outstanding experience, but human handling can be deadly for wild tortoises. Tortoises store water during dry times of the year, and if disturbed, they will release their water and can die from dehydration. Find out what to do if you find a desert tortoise in your neighborhood.