Mud turtles are small (up to 7 inches in length), semi-aquatic turtles with oval-shaped shells in the family Kinosternidae. Turtles in this family have glands on the sides of their bodies that emit a foul-smelling musk when they are disturbed. Mud turtles have one or two hinges on their plastron that allow them to close their shell tightly. Being omnivorous, mud turtles eat snails, aquatic invertebrates, tadpoles, and carrion, but they will also consume some plant matter. There are three species of mud turtles that are found in and near creeks, rivers, lakes, stock tanks, and ciénegas in central and southeastern Arizona. Mud turtles can be relatively common in their preferred habitats. A hunting license is required to lawfully collect and possess mud turtles in Arizona.

During hot, dry periods, they aestivate underground in burrows in the mud along the water’s edge; they can remain underground for more than a year during prolonged drought conditions. They also hibernate underground during the winter. Although aquatic, mud turtles are able to travel great distances over land in search of water, an ability that proves useful in arid habitats. This species is usually encountered in ephemeral bodies of water, such as stock tanks, pools, or roadside ditches. 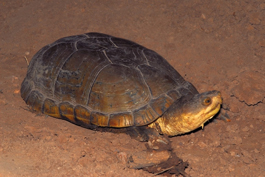 The Arizona mud turtle has a yellowish-brown carapace and a yellow plastron. It reaches about 6 inches in length. The neck and throat are yellow or cream, and the neck has small tubercles. It is diurnal, but becomes more nocturnal during the summer monsoon season. Favorite prey items of the Arizona mud turtle are tadpoles, frogs, and toads, but it also eats invertebrates. The Arizona mud turtle is limited to south-central Arizona and extreme north-central Mexico.

The yellow mud turtle has a brown to yellowish-brown, flattened carapace and a yellow plastron. It reaches about 6.5 inches in total length. The neck is yellow or cream and has small tubercles. Its preferred habitat in Arizona is shallow pools, including stock tanks, with mud or sand bottoms. The yellow mud turtle is diurnally active, and eats insects, frogs, carrion and plant matter. Inhabits still or slow-moving waters, including ponds, stock tanks, and slow-moving streams.

In Arizona, the yellow mud turtle is limited to the extreme southeastern corner of the state, including Cochise and Graham Counties. Nationwide it is found from Nebraska south to Mexico, and west to Colorado. 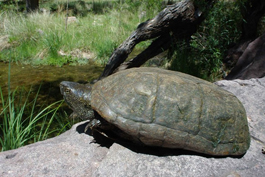 The Sonora mud turtle has a keeled, olive-brown carapace. The throat and neck are brown with yellow reticulations and there are prominent tubercles under the chin. It reaches approximately 7 inches in length. Although aquatic, the Sonora mud turtle may be seen on land as it travels between bodies of water. It is usually diurnally active, but becomes more nocturnal during the monsoon season. It feeds on invertebrates and small vertebrates, including fish and amphibians, but it also eats carrion and some plant matter. This species can be commonly found in a wide variety of water bodies, including rivers, streams, stock tanks, ponds, and reservoirs.

The Sonora mud turtle has the most extensive range of the three mud turtles in Arizona. They are found in streams, ponds, and stock tanks in central and southern Arizona. Their range also extends into western New Mexico and north-central Mexico. There are two subspecies in Arizona: Kinosternon sonoriense sonoriense, which is commonly referred to as the Sonora mud turtle and is found in most of the species’ Arizona range, and Kinosternon sonoriense longifemorale, commonly referred to as the Sonoyta mud turtle.

The Sonoyta mud turtle is an isolated subspecies, localized in the Rio Sonoyta and Rio Guadalupe basins in Arizona and Sonora, Mexico – an extremely arid environment. Today, there are five known remaining populations of Sonoyta mud turtle – one at Quitobaquito Springs in Organ Pipe Cactus National Monument in Arizona and four in Sonora, Mexico. Due to aquatic and riparian habitat loss related to agricultural and municipal groundwater pumping, and long-term drought, the Sonoyta mud turtle, this subspecies was listed as endangered under the Endangered Species Act in September 2017.

Because they require consistent sources of water, mud turtles are affected by factors that influence water levels, including groundwater pumping, drought, agricultural pesticide use, intensive cattle grazing, and the introduction of exotic vegetation. Also, because the streams and perennial pools in which they reside are often isolated, populations are vulnerable to local extinctions if the habitat is destroyed. Research is needed on mud turtle reproductive biology and survival to determine minimum sizes for populations to be considered viable.

How You can Help

Participate in the Sponsor-a-Turtle Program. The Arizona Game and Fish Department’s Turtles Project utilizes technical equipment such as radio-transmitters, GPS units, and hoop traps to survey and monitor turtle populations statewide. By donating to the Turtles Project, you will help project biologists purchase this gear so that they may continue to plan and implement conservation and management. Find out about the Sponsor-a-Turtle Program here, or make a donation by texting TURTLE to 41444.