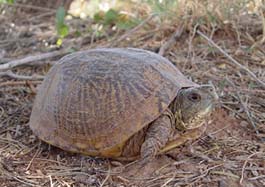 Little is known about historical or current populations of Arizona’s ornate box turtles, because, put simply, box turtles are secretive and difficult to find. Finding box turtles in the wild is haphazard at best, and is often simply a matter of being in the right place at the right time.

Gathering data on box turtles is important so that biologists can make informed management decisions. The Arizona Game and Fish Department has developed the Ornate Box Turtle Watch so that members of the public can be our “eyes” in the field by reporting any observations of wild box turtles. This “citizen scientist” approach relies on data gathered from chance encounters by the people driving, hiking, birding, or other watchable wildlife activities in box turtle habitat in southeastern Arizona, where the species is found.

How to Participate in the Ornate Box Turtle Watch

The Arizona Game and Fish Department is asking for your help in monitoring box turtle populations by collecting simple location and weather data for any box turtle you encounter in Cochise County, and parts of Graham, Gila, Pima, Pinal, and Santa Cruz counties.

You can submit ornate box turtle data by entering your observation on the Department’s Arizona’s Ornate Box Turtle Watch Project on iNaturlist.org or by filling out an observation form (one form for each box turtle, please), which is a PDF that requires Adobe Reader to view and edit. Simply type in the requested data, print the form, and either mail it to the address on the bottom of the form, along with any photographs, or e-mail the form and photographs to cajones@azgfd.gov. Alternatively, if you have Adobe Professional, you can type in the data and save the form, then e-mail it to the Turtles Project.

If you know you are going to be hiking, viewing Arizona’s watchable wildlife, or driving in box turtle habitat within the species’ range (see distribution map, right), download the iNaturalist app and sign up for Arizona’s Ornate Box Turtle Watch Project or print off a few observation forms so you are ready to collect data on any box turtles you might encounter.

Please also download, print off, and fill in a volunteer registration form (you only need to fill this out one time; disregard if you have filled one out in the past) and a volunteer time sheet. This allows us to keep track of volunteer time spent towards the project, which qualifies us for Federal match funding for our projects.

The data requested for the Ornate Box Turtle Watch will not require you to handle the turtle. Remember that box turtles are protected in Arizona, so picking one up is illegal, and more importantly, it could be detrimental to its survival. Box turtles often void the contents of their bladder when disturbed (such as when picked up by humans), which can lead to dehydration and possibly death for a wild animal that lives in the desert.

If you encounter a box turtle outside its native range, for example, within the Tucson city limits, anywhere in Maricopa County, or the northern or western parts of Arizona, this turtle is likely someone’s escaped pet and does not belong in the wild. Please do not report these box turtle encounters to the Ornate Box Turtle Watch Project; instead, contact your regional Arizona Game and Fish Department office for information on what to do.

How to find box turtles

Preferred box turtle habitats include Semidesert Grassland, Chihuahuan Desertscrub, and Madrean Evergreen Woodland, but they can also be found in Sonoran Desertscrub. 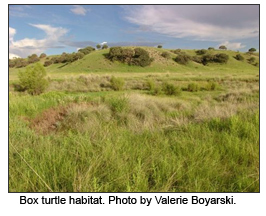 Some good places to find ornate box turtles are also good places to hike, bird, and view Arizona’s watchable wildlife in desert grasslands, including many of our public lands managed by the Bureau of Land Management, National Park Service, U.S. Fish and Wildlife Service, and U.S. Forest Service. Ornate box turtle annual activity peaks from mid-July through September, during the monsoon season. Their activity is triggered by rain, which brings them out of their burrows in search of food and mates. They prefer temperatures below 80°F, and relative humidity of at least 50%; for this reason they are often active in the mornings and evenings, when they can be seen crossing roads.

What’s wrong with relocating or bringing home a box turtle?
Moving or bringing home a box turtle from the wild is not only illegal in Arizona; it also hurts conservation efforts and is detrimental to wild populations. When you remove a turtle (or any animal, for that matter) from the wild and bring it into captivity, that individual is no longer able to produce offspring and contribute to the population, and is considered “biologically dead.” Moving a turtle from where you find it to a location that you think may be a superior habitat is harmful as well. Turtles spend their entire lives within an area the size of a football field; if moved to a new area they may not be able to find adequate food, water, and shelter and will likely die. In addition, turtles have strong homing instincts; when you move a turtle from the only area it knows, it will likely try to navigate back, which could put it at risk of crossing many roads in the process.

How to identify a box turtle

The ornate box turtle is a small (up to about 6”) land turtle with yellow, radiating lines on its shell. These lines may fade as the turtle ages. It has a hinge on the plastron that allows it to close its shell completely, hence the common name “box” turtle.

The only other land turtle native to Arizona is the desert tortoise, which has a uniformly greenish-brown shell without any yellow radiating lines, and can grow up to 15” in length. The desert tortoise is not able to close its shell completely, and has distinct growth lines on its carapace.

Male – notice the red eyes of this male box turtle. 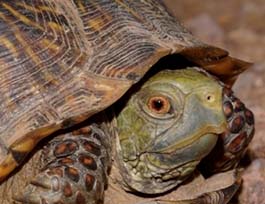 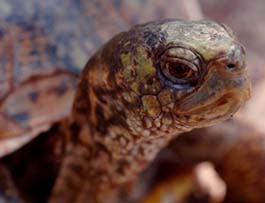