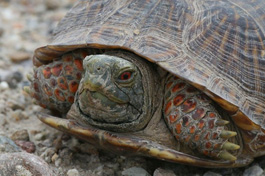 The ornate box turtle is a terrestrial turtle in the family Emydidae that is equipped with a high-domed carapace and a hinged plastron. This hinge allows them to close their shells completely when provoked by predators. The carapace is brown with yellow stripes radiating from the center of each scute. They grow to about 5.75 inches in length and can live 50-100 years.

During dry periods they remain in burrows, either self-created ones or those of small mammals. They emerge in the morning and after rain to forage. The ornate box turtle is omnivorous; commonly consumed foods include insects, worms, and many kinds of vegetation, including cactus pads.

This species exhibits sexual dimorphism; the male has a bluish head, red or orange eyes, a concave plastron, and a long, curving, inner hind claw. The yellow radiating stripes on the shell of males disappear with age. Females have brown or yellow eyes and flat plastrons, and their shells generally retain the yellow lines.

Ornate box turtles can reproduce after they reach 7-8 years of age. After mating, females lay an average clutch of 2-3 eggs (up to 8 maximum) during the monsoon season. Hatchlings are dark in color with a yellow stripe down the center of the shell.

In Arizona, ornate box turtles mainly inhabit semidesert grassland, but can also be found in Chihuahuan desertscrub, Madrean evergreen woodland, and Sonoran desertscrub (up to 7100 feet in elevation). They require loose soil for burrowing. 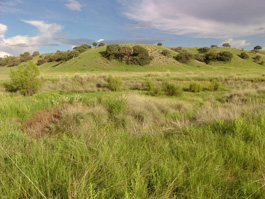 To date, there has been little research on the status of the ornate box turtle in Arizona. However, box turtle populations throughout the United States are thought to be in decline due to human-influenced landscape changes. Because of this concern, the Arizona Game and Fish Department’s Turtles Project is initiating monitoring efforts in ornate box turtle habitat to determine baseline population levels and to develop management plans for the species.

One of the major threats to box turtles is landscape level changes to their habitat, such as large-scale development and the creation of roads that cause habitat fragmentation and isolate populations. Other threats include mortality from automobiles and collection from the wild. Box turtles are often encountered crossing roads in suburban and rural areas in southeastern Arizona, especially during the monsoon season. Unfortunately, many people mistakenly believe that a box turtle they encounter on the road can be helped by bringing it home. However, bringing a box turtle home means it must always remain in captivity, because a captive turtle can never be released back into the wild.

How you can Help

Keep Captive Turtles Captive. Captive turtles released into the wild can severely jeopardize local wild turtle populations through the introduction of diseases and parasites. Also, captive box turtles released into the wild can displace individuals or populations of wild box turtles by competing for resources. If you have a captive box turtle that you can no longer care for, contact the Turtle and Tortoise Preservation Group.

Participate in The Sponsor-a-turtle Program. The Arizona Game and Fish Department’s Turtles Project utilizes technical equipment such as radio-transmitters, GPS units, and hoop traps to survey and monitor turtle populations statewide. By donating to the Turtles Project, you will help project biologists purchase this gear so that they may continue to plan and implement conservation and management. Find out about the Sponsor-a-Turtle Program here, or make a donation by texting TURTLE to 41444.

Practice Responsible OHV Use. Ornate box turtle habitat in Arizona is limited and is sensitive to degradation. Using off-highway vehicles (OHVs) in unauthorized areas can result in loss and degradation of habitat through the degradation of native vegetation, spread of invasive plant species, and soil erosion. Please stay on roads and trails, and do not trample vegetation.

Become a Citizen Scientist — participate in the Department’s Ornate Box Turtle Watch Project where you are encouraged to watch the turtle and enjoy the experience, and then help the Department monitor this species by reporting any observations of wild box turtles in Arizona on the Ornate Box Turtle Watch Project iNaturalist page or by submitting an observation form.  Please avoid contact and keep a respectful distance from the turtle, and do not disturb it by picking it up.