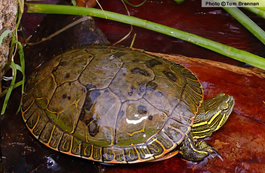 The painted turtle is an aquatic turtle in the Emydidae family. It is small to medium sized (up to 10 inches) and has a low, flat shell that with red and yellow on the margins. The plastron is bright yellow and the legs are marked with red stripes. Unlike the pond slider, they do not have red stripes on the head.

The life history of the painted turtle in Arizona is relatively unknown because of its limited range in the state. They are omnivorous, eating insects, fish, amphibians, carrion, and aquatic plants. Painted turtles are sexually dimorphic; the males are smaller in size and have long claws used in mating. Females have short claws and grow larger than males. Mating occurs in spring and fall. Females nest along river and pond banks, laying as many as 25 eggs per clutch. Painted turtles prefer slow moving streams and reservoirs with plenty of logs and rocks for basking.

Painted turtles have a large distribution found across the eastern and northern United States and southern Canada. In Arizona, there are several painted turtle populations north of the White Mountains in Apache County that are thought to be native, but are likely disjunct from the larger population of painted turtles. Painted turtles have also been established in ponds and canals in Phoenix, Tucson, and Cottonwood, well outside of their known natural range.

A hunting license is required to collect painted turtles in Arizona. Contact the White Mountain Apache Tribe for license requirements on the reservation.

How You can Help

Keep Captive Turtles Captive. Captive turtles released into the wild can severely jeopardize local wild turtle populations through the introduction of diseases and parasites. Captive aquatic turtles released into the wild can also displace individuals or populations of wild aquatic turtles. If you have a turtle that you can no longer care for, contact the Turtle and Tortoise Preservation Group.

Participate in the Sponsor-a-Turtle Program. The Arizona Game and Fish Department’s Turtles Project utilizes technical equipment such as radio-transmitters, GPS units, and hoop traps to survey and monitor turtle populations statewide. By donating to the Turtles Project, you will help project biologists purchase this gear so that they may continue to plan and implement conservation and management. Find out about the Sponsor-a-Turtle Program here, or make a donation by texting TURTLE to 41444.