Connectivity: Why it is Important

Connectivity: Why it is Important

Wildlife on the Move 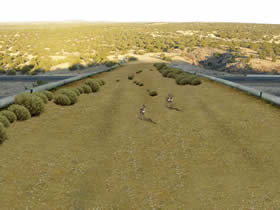 All animals move across the landscape to varying extents in order to acquire the resources necessary for survival: food, water, protective cover, and mates. Mountain lions, black bears, and mule deer roam over vast expanses that can encompass thousands of acres, while smaller animals such as tassel-eared squirrels and northern leopard frogs engage in essential movements on a much smaller scale. Some animal movements occur on a daily basis, while seasonal migrations may occur annually, and the dispersal of young from their natal sites to secure new breeding territories happens only once in an individual’s lifetime. Man-made barriers such as roads, urban areas, and railroads can affect each of these movement patterns and may pose a threat to the long-term persistence of wildlife populations.

The best solution to addressing the issues of habitat loss and fragmentation is to prevent it from occurring by preserving existing blocks of unfragmented habitat. The Department's guidelines documents discuss options for building communities and projects in a way that minizes the effects on our wildlife species. These guidelines provide recommendations and are intended to be supplemented with consultation with AGFD staff. If a block must be built on, creating corridors or linkages provides the means for animals to move between blocks of habitat while supporting natural levels of:

In addition to the benefits provided to our wildlife species, maintaining a natural network of connected landscapes also benefits our human population, perhaps most obviously through increased public safety. A 2006 study by the Transportation Research Board found that each year more than 200 motorists are killed and approximately 29,000 are injured as a result of wildlife-vehicle collisions in the United States, with annual costs estimated in the hundreds of millions of dollars. Identifying important wildlife movement areas that cross transportation corridors during the construction of new roads or improvements allows for the informed siting of wildlife-friendly over- and underpasses (see image at top of this page) that can greatly reduce the likelihood of collisions. Incorporating knowledge of wildlife movement areas can also play a role in setting priorities for rural and urban open space planning and acquisition and can help avoid potential conflicts between recreationists and wildlife. Maintaining wildlife populations through conservation efforts such as the protection wildlife linkages is also of economic and social value given the significant contribution of wildlife-based recreation to the economies of Arizona.