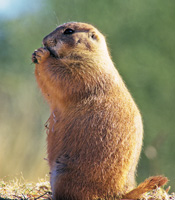 Black-tailed prairie dogs are diurnal rodents that are approximately 14 inches long including a two and a half inch tail. They are highly social animals that live in family groups called coteries. A coterie typically consists of one breeding male, one to four breeding females, and any offspring less than two years of age. Multiple adjacent coteries form a colony. Prairie dogs live in groups to help protect themselves from predators. They use an extensive system of vocalizations to communicate with the rest of the colony. Studies show that they have a different alarm call for different predators, such as hawks, coyotes, and humans. During colder winter months, they spend more time underground, but they do not hibernate.

Black-tailed prairie dogs breed once a year and produce an average of three young. Females can live to be eight years old, while males have a shorter life span of approximately five years. Females stay within their coterie for life, but males disperse once they reach breeding age at around two years.

Black-tailed prairie dogs eat a variety of vegetation. They mainly feed on grasses and forbs, but will also eat seeds and insects. They do not need a source for water because they are able to hydrate themselves with water from their food.

The goal of the Arizona Game and Fish Department is to re-establish this native species to its historic range while improving grassland health and animal diversity. The species will be considered re-established when the reintroduced colonies are self-sustainable and further releases are no longer necessary. The goal is to have black-tailed prairie dogs occupying 7,100 acres of grassland.

In 1998, the U.S. Fish and Wildlife Service (FWS) was petitioned to list black-tailed prairie dogs as a threatened species under the Endangered Species Act. This led to the species being listed as a candidate species until 2004. Another petition to list the species was filed in 2007, but the FWS determined in 2009 that listing the species was not warranted.

The Arizona Game and Fish Department first began investigating reintroduction of black-tailed prairie dogs in the 1970s. After the first petition was filed to list the species, there was an effort among 11 of the western states to begin conservation of the species and the Prairie Dog Conservation Team (PDCT) was formed. The PDCT developed a multi-state plan which provided guidelines under which individual states could develop their own state management plan to prevent the need to list the species. The Arizona Black-tailed Prairie Dog Working Group was then assembled and a management plan for Arizona was drafted. This plan was not finalized but the Department adheres to its guidelines.

The Working Group decided to focus re-establishment efforts on State Trust and federal lands. Chosen sites needed to be at least two miles from any private land to provide a buffer for private land owners that did not wish to have prairie dogs on their property. Private land owners that are interested in having prairie dogs on their property are encouraged to contact the Arizona Game and Fish Department.

The first release occurred in 2008 when 74 black-tailed prairie dogs were trapped at Ladder Ranch in New Mexico and released at the Las Cienegas National Conservation Area. At least four offspring were identified the following spring. Since then, additional releases have occurred to create two additional black-tailed prairie dogs colonies at Las Cienegas National Conservation Area in 2009 and 2010.  In 2017, a colony was established on Pima County land at Sands Ranch.

Due to the sensitive nature of the species during re-establishment, the hunting season for black-tailed prairie dogs is closed. Risks to the species need to be minimized while the population grows and expands in its historic range.

Keystone Species of the Grasslands

Prairie dogs clip and eat grasses within their colony. This grazing promotes the growth of certain types of plants and increases the nitrogen concentration and nutritional value of the new growth. This is why cattle, antelope, and bison often prefer to forage within prairie dog colonies. Prairie dogs dig to find food and to build deep burrows underground. This activity allows water to penetrate deeper into the ground and enhances soil structure.

Prairie dogs must watch for predators. Clipping grasses helps them spot threats but trees such as mesquite and taller shrubs inhibit their ability to see an approaching predator. Mesquite tree encroachment has become a problem within grasslands. Tree growth has been attributed to the absence of prairie dogs since the prairie dogs would prevent any plant species from growing in an area where they need to have a clear view.

While it is almost impossible to restore developed lands to their historic state, it is possible to try and establish black-tailed prairie dogs on existing undeveloped lands that will prevent future development and allow prairie dogs to expand. The species’ extirpation from Arizona is due partly to land conversion. Most historic habitat has been converted for agricultural purposes, urbanization, resource extraction, and livestock grazing.

The main reason black-tailed prairie dogs are no longer found in Arizona is due to extensive extermination efforts that were initiated in the early 1900s. Prairie dogs were considered pests and ranchers viewed them as competition with their cattle for grass. While massive poisoning efforts are no longer occurring in Arizona, extermination still occurs in many places within its’ range. Poisoning not only kills prairie dogs, but often kills any animal that eats the poisoned prairie dog. Continued use of poisons will not only reduce prairie dog numbers, but could also cause a decline in the populations of the animals that prey upon them.

Plague is a bacterial disease known to affect prairie dogs and is capable of almost entirely wiping out a prairie dog colony in a very short period of time. The disease is carried by fleas which spread the disease through host animals. The fleas rely on prairie dogs as hosts and they stay in the burrow after their host dies and attach themselves to the next host that comes along, which may or may not be a prairie dog. Badgers, coyotes, and foxes can also be hosts to the fleas and are more likely to cause a widespread outbreak of the disease because they travel further distances.

Prairie dogs are a great indicator that plague is present in an area because their populations are decimated so quickly. This alerts biologists to quickly begin to “dust” the colony with an insecticide to prevent further spread of the disease to other animals or people.

So far, plague has net been observed in the Southern Arizona Black-tailed prairie dog colonies.

Historically, Black-tailed prairie dogs were found in the southeastern portion of Arizona. The species ranged from the Sulphur Springs Valley north of Bonito, west to the Sonoita grasslands. This range includes parts of the counties of Cochise, Graham, Pima, and Santa Cruz.

Currently, the Arizona Game and Fish Department has performed releases at three different sites within the Las Cienegas National Conservation Area near Sonoita.  An additional release, creating a fourth colony was performed at a site called Sand’s Ranch on Pima County land, closer to the foothills of the Whetstone Mountains.  The Arizona Game and Fish Department continues to seek out opportunities to promote colony expansion across the Black-tailed prairie dog’s former range.