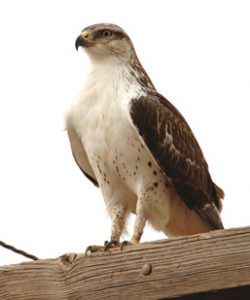 Raptors are birds of prey that have talons (claws) and beaks specially designed to capture prey and tear flesh. The term “raptor” is derived from the Latin word “rapere,” which means to snatch, grab, or carry off. This is an appropriate term for an animal that hunts their food while in flight. Common groupings for raptors in North America include: accipiters, eagles, falcons, kites, hawks, harriers, ospreys, owls, and vultures.

These groups share many things in common. First, they are all raptors, or birds of prey.  They descend from a common ancestor, the Archaeopteryx, which inhabited the earth 140 million years ago. They are also terminal predators.  They eat a variety of animals that range in size from insects (i.e. American kestrel) to newborn deer (i.e. golden eagle), and scavenge on the largest of animals (i.e. California condor). Finally, as top predators and habitat specialists, they share common threats to their status and existence on this planet.

Over the past 70 years, raptor populations have declined in North America.  The most common cause for the decline is the post-World War II use of the pesticide DDT. Exact raptor population numbers were largely unknown before the use of DDT, so the precise impact the chemical had on the abundance of each species remains unclear. But by 1972, the federal government realized the cause of the dwindling raptor numbers and banned the use of the pesticide in North America. Ultimately, species such as the peregrine falcon and the bald eagle had such low numbers that they needed the added protection of the Endangered Species Act  to recover. Other raptor populations stabilized after the ban without the need of added protections. Some continue to remain low, while others have rebounded due to intensive management programs. However, questions remain about many species’ ability to recover in an ever changing environment.

This changing environment is due, in part, to the expansion of the human population, metropolitan areas, and the resources needed to meet new demands. As growth infringes upon habitat, aspecies must: 1) adapt to the new environment, 2) concentrate in the remaining habitat outside the developed areas, or 3) abandon the habitat where they were historically present.

Arizona has a wide range of habitat types that support a variety of raptor species. Ranging in elevation from the San Francisco Peaks at 12,500 feet to the lower Colorado River basin at 75 feet, vegetation characteristics range from mixed conifer forests to the lowest desert biomes. This variety offers the opportunity for many raptor species to breed and winter throughout the state. Forty-four raptor species have been documented in Arizona, of which 37 breed annually. Four species are federally-listed as threatened or endangered, and 13 are identified as Species of Greatest Conservation Need (Tier 1a and 1b). Two species that have been extirpated from Arizona include the aplomado falcon and the California condor (both of which are now being reintroduced into New Mexico and northern Arizona, respectively), The cactus ferruginous pygmy-owl is in danger of disappearing from Arizona, while the short-tailed hawk is a recent natural arrival. 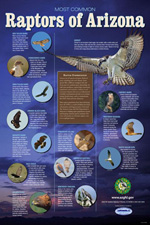 Contact a regional office for a ‘Raptors of Arizona’ poster.

All North American raptors are protected by federal and state laws including (depending on the species): the Endangered Species Act, the Migratory Bird Treaty Act, the Lacey Act, the Bald and Golden Eagle Protection Act, the Airbourne Hunting Act, and various state statutes. The Arizona Game and Fish Department’s Raptor Management Program was developed to address the management and monitoring needs of this unique group of bird species. In addition to addressing the threats to population numbers and species occurrence, the Raptor Management Program assists with the incorporation of raptor conservation measures in development projects and urban expansion, and regulates sport falconry. 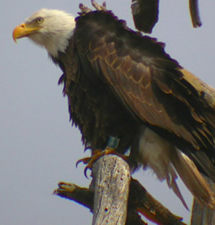 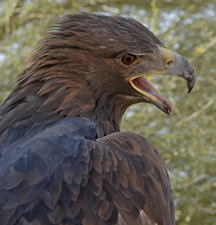 In the past only listed species, those petitioned to be listed, or a candidate species under the Endangered Species Act were monitored to assess population status. Such reactionary management is mandated by federal law. However, the Arizona Game and Fish Department and other states are becoming more proactive in addressing raptor management issues. The department established the Raptor Management Program to identify population status, trends, and threats, and to implement management activities to help ensure that raptor populations remain healthy and prevent listing under the Endangered Species Act.

Monitoring, research, and management help biologists: 1) determine the status of raptor populations, 2) study and identify issues that may be limiting raptor abundance or distribution, and 3) fix the problems. With the help of federal, state, and local agencies, Native American Tribes, and private organizations, the Raptor Management Program is committed to keeping common raptor species common, and to improve the status of those species experiencing low population numbers.

To address these concerns, the U.S. Fish and Wildlife Service is currently drafting Guidelines for Raptor Protection from Human and Land Use Disturbances in the Western U.S.. The department will use these guidelines to develop the Arizona Raptor Management Plan. Both documents, when completed, will outline how federal and state agencies will manage raptor species in Arizona.

In addition, the Department and its partners have recently completed, or are currently conducting, research, management, or monitoring projects on bald eagles, golden eagles, burrowing owls, and peregrine falcons.