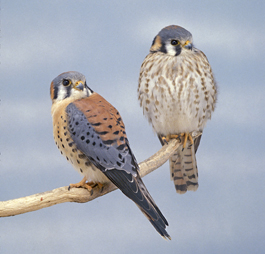 Photo by Ron Austing
The American Kestrel is North America’s smallest and most colorful falcon. Formerly known as the sparrow hawk, it can be seen perched along roadsides or hunting insects, small rodents, reptiles and birds over open fields. Kestrels are one of the most numerous and widespread falcons in the country. Their range extends from Alaska to the southern tip of South America. Although widespread, North American Breeding Bird Surveys show that there are 66 percent fewer kestrels on the continent than in 1966, and many other long-term studies echo this decline. 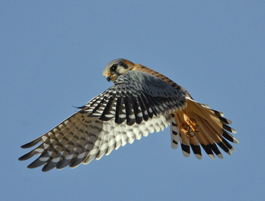 Photo by Jim Burns
These open-area hunters prefer habitats with short ground vegetation and sparse obstructions. Kestrels can be found in deserts, grasslands and meadows. They have even acclimated to habitats modified by humans, including parks, farm fields, cities and suburbs. During the breeding season, kestrels need access to nesting cavities and perches found in trees, saguaros or artificial nest boxes.

American kestrels lack the ability to excavate their own nest cavities, so they rely on structures already built by other animals, such as woodpeckers. At the start of breeding season, typically in February, males inspect potential nest cavities within their territory. They then escort a female to the cavities (sometimes enticing her with a gift of food), and she makes a final selection.

Average clutch size is four to five pale eggs with dark blotches. Incubation is mostly done by the female and lasts about 30 days, with young ready to leave the nest another 30 days after hatching. Parents continue to feed fledglings for a couple more weeks.

A kestrel’s diet is mostly composed of insects and invertebrates, but also includes small rodents, reptiles and birds. Once prey is captured, a bite to the neck with the kestrel’s specialized beak can damage its victim’s central nervous system and minimize the chance of escape. When food is abundant, kestrels have been known to cache surplus prey in grass clumps, tree roots and fence posts to save for lean times. 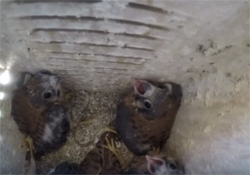 The American kestrel is currently not considered a Species of Greatest Conservation Need in Arizona, and Department efforts aim to keep the species widespread and abundant throughout the state and nation. Multiple long-term studies including migration counts, breeding bird surveys and other monitoring programs, collectively indicate declines in this vibrant falcon’s population over the past 50 years. However, reliable data on populations in the Sonoran and Mohave deserts is currently unavailable. Loss of nesting habitat, disease, predation, competition with non-native species and pesticides are suspected to be contributing to recent declines.

More reliable data on American kestrel populations in southwestern Arizona are needed to accurately assess the species’ status in the state. Citizen science efforts to construct and monitor artificial nest boxes have proven to increase nesting habitat and provide important information on resident populations. Additionally, emerging technological advances in genetic mapping is allowing the Department and its partners to examine populations of breeding, wintering and migratory kestrels to aid in conservation efforts. Public involvement in management projects will greatly benefit this lively little falcon.

E-mail raptors@azgfd.gov to learn how you can help or for more information on kestrels in Arizona. For information about national conservation efforts, visit the American Kestrel Partnership website at www.kestrel.peregrinefund.org