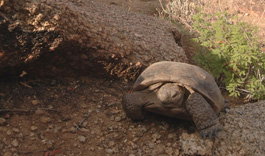 Arizona has seven species of native turtles, including aquatic and terrestrial species. This fact may be surprising, since many Arizonans can go their whole lives without seeing a turtle in the wild! The goal of the Arizona Game and Fish Department’s Turtles Project is to manage and conserve Arizona’s turtle species through statewide population monitoring, creation and implementation of state conservation agreements, provision of research grants, public education and outreach, and through coordination between state, federal, and private agencies.

The Arizona Turtle Conservation and Management Web site is designed so that non-experts can easily acquire and understand information on the lives of Arizona’s turtles and what the Department is doing to manage these species. Throughout the Web site, visitors can click on scientific terms to read their definitions in the glossary. For all of Arizona’s native turtles, information is organized into natural history, distribution, habitat, conservation, cautionary measures, and how you can help sections.

Captive aquatic turtles that are released into the wild can become established, and can potentially spread disease to and compete for resources with native aquatic species, including the state’s native mud turtles. Do not release captive turtles, and make sure enclosures are secure so that turtles cannot escape. In the Phoenix area, the Turtle and Tortoise Preservation Group and Phoenix Herpetological Society provide assistance to owners who are no longer able to care for their turtles.

Do not breed captive tortoises

The Arizona Game and Fish Department receives hundreds of unwanted and uncared for captive-born tortoises each year. The Department spends a considerable amount of funding and effort to find homes for these tortoises. This takes away from conservation efforts of wild tortoises. Tortoises hatched in captivity cannot be released into the wild. Once in captivity, a tortoise must be cared for by humans for the rest of its life.

Participate in the Sponsor-a-Turtle program

The Arizona Game and Fish Department Turtles Project utilizes technical equipment such as radio-telemetry tags, GPS units, and hoop traps to survey and monitor turtle populations statewide. By donating to the Turtles Project, you will help project biologists purchase this gear so that they may continue to plan and implement conservation and management. Click here to download the Sponsor-a-Turtle program brochure.

Using off-highway vehicles (OHVs) in unauthorized areas can result in loss and degradation of tortoise habitat and can degrade the quality of water in streams and rivers. Please stay on roads and trails to avoid damaging vegetation.

If you observe a desert tortoise in the wild, it is best to let it continue on its way. Observing tortoises in the wild is an outstanding experience, but human handling can be deadly for wild tortoises. Tortoises store water during dry times of the year, and if disturbed, they will release their water and can die from dehydration. The one exception to this rule is if a tortoise is in harm’s way trying to cross a road. If it is safe to do so, gently lift the tortoise just high enough so its feet are above the ground and transport the tortoise across the road in the direction it was heading. What to do if you find a desert tortoise in your neighborhood. Or contact TAP@azgfd.gov.

The ornate box turtle is thought to be in decline in Arizona. Help the Arizona Game and Fish Department monitor this species by reporting any observations of wild box turtles in Arizona. Find out about the Ornate Box Turtle Watch.