Desert pupfish are one of 34 species of fish native to Arizona.  Like many of our native fishes they belong to the minnow family; Cyprinidae.  Contrary to popular belief, minnows are not defined by their size, but rather by a suite of physical features that separate them from other fishes.  Minnows are the largest family of fishes in the world with about 3,000 living species.  Many minnows are quite large.  One species native to our state, the Colorado pike minnow, reached six feet in length and weights of 100lbs.  Many of these larger species of native fishes were an important food resource for Native Americans. Learn more about Arizona’s unique native fishes. 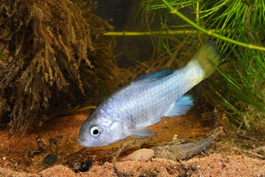 Historically there were three species of pupfish found in Arizona.  The Monkey Springs pupfish is extinct due to the introduction of predatory large-mouthed bass into its limited southern Arizona habitat.  The remaining two species, Quitoboquito pupfish and desert pupfish are listed as endangered species and the focus of intensive conservation efforts including ponds were captive breed fish serve as gene pools for reintroduction into historic habitats.

Take a look at the Pupfish cam

Desert pupfish are among our most beautiful native fishes.  They are well adapted to harsh environments. They can tolerate water with low oxygen levels and salinity three times that of sea water in addition to temperatures exceeding 110F.  Desert pupfish are small, about two inches in length and were once very common.  They were originally found in many of southern Arizona’s springs, marshes, and rivers where they inhabited the slow, shallow waters along the edges.  For much of the year the two sexes are nearly identical sporting gray or brown dorsum with silvery sides marked with dark spots or reticulations.  However, when water temperatures rise to near 70°F in the spring, the breeding season commences. Though females do not change in appearance, male fish become metallic blue with a yellow tail and their fins develop a black border.  Male desert pupfish set up and aggressively defend spawning territories called reds.  When it comes to breeding males prefer larger females which are likely more fecund (produce more eggs) and maximize the breeding effort.  A receptive female enters the red. The male quickly approaches and pairs with her.  The mating pair, traveling side by side, dips to floor of the red and shudder.  The female deposits a single egg and male fertilizes it.  The defending male removes any eggs he finds in his red that are not fertilized by him.  The pugnacious behavior of males serves to defend the eggs until hatching. Young pupfish seek refuge among dense vegetation until they grow large enough to join the rest of the fish.

Pupfish are omnivorous. They feed primarily on aquatic plants and invertebrates such as algae and insect larvae like mosquitos and have been known to eat young of their own species.

Desert pupfish declined in the late 1950s due to habitat destruction and the introduction of larger predatory fishes. Recovery efforts have not only included captive rearing and refuge sites but control of exotic species and restoration of historic aquatic habitats.

This camera is located in the cienega habitat at the Red Mountain Campus of Mesa Community College, an important partner in conserving this endangered fish and other wildlife species.  The cienega pond houses a variety of native wildlife including Gila topminnows (another endangered fish), long-finned dace, lowland leopard frogs, and Sonoran mud turtles. This pond is part of an effort to establish literal gene pools for present and future conservation efforts ensuring that these important fishes are not lost to future generations.  These ponds are a cooperative effort with conservation minded institutions, the Arizona Game and Fish Department and US Fish and Wildlife Service. Through these partnerships small refuge ponds have been set up to breed and house these fish, acting as gene pools to conserve discrete linages of native fish.  These refugia are used as source populations for reintroducing endangered fish back to historic habitats.