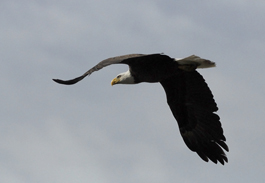 Bald eagles in Arizona have experienced significant population increases since the species was listed under the Endangered Species Act in 1978, when only 11 breeding pairs had been identified within the state.

Through multiple studies and intensive management projects to conserve and protect the species, the state’s bald eagle population has grown dramatically. This growth nationwide prompted the U.S. Fish and Wildlife Service to remove the bald eagle from the Endangered Species Act in 2007. However, continued threats to the population in the southwest require continued protective, coordinated management actions by the Southwestern Bald Eagle Management Committee and implemented through the Arizona Game and Fish Department.

Take a look at the Eagle Cam

Bald eagles are distributed throughout North America, from Alaska to northern Mexico. They nest in trees, typically breeding near water where fish — its main food source — is readily available. In winter, the eagles will sometimes congregate in large numbers where waterfowl and fish are locally abundant.

In Arizona, most nesting bald eagles occur in desert habitats along the Salt River, Verde River and large reservoirs in the central part of the state, but can also be found along the Mogollon Rim, the White Mountains or even in urban environments. The birds will build nests on cliffs or trees, such as cottonwoods and sycamores.

In autumn, bald eagles migrate to Arizona from Canada, Wyoming, Montana and other states. Many spend winter at higher elevations near Flagstaff, but can also be found in good numbers at Roosevelt Lake and along the Salt River.

Bald eagles commonly live 10 to 20 years in the wild. Arizona’s oldest documented bald eagles include a female that bred at Alamo Lake from 1989 to 2009 and a male currently residing at Luna Lake, both of which reached 30 years of age.

Due to their size, bald eagles have few competitors. They can have aggressive, and sometimes fatal, interactions with other bald eagles over territory or food resources. Competing eagles may grapple in mid-air, locking their feet together and tumbling in a free-fall “helicoptering” motion toward the ground, only releasing at the last moment. While this behavior is rarely observed, eagles occasionally perish if they are unable to separate in time.

Nestlings and recently-fledged young are vulnerable to a variety of predators, including golden eagles, great-horned owls, bobcats and coyotes. Eggs are sometimes preyed upon by ravens or climbing mammals.

In late spring, when temperatures first exceed 100 degrees for several days, nestlings may succumb to dehydration and heat stress. Parasites such as ticks and Mexican chicken bugs may lead to disease or death in some nests. Mortality of bald eagles also occurs from human causes such as being hit by cars (likely while feeding on roadkill), electrocution from power lines and lead poisoning.

Young eagles are at the greatest risk during the first year of life, with 70 to 85 percent annual survival into their fourth year. Only about 30 percent survive to breeding age. However, the survival of adults is about 90 percent.

Bald eagles reach adulthood at 4 to 6 years of age at which time they attain their characteristic white head and tail, signifying they are ready to breed. Younger birds exhibit darker beaks and eyes, and have variable amounts of white feathers on their body, tail and underwings.

Arizona bald eagles prefer to build nests on cliffs or in trees, generally within one mile of a lake, river or other body of water. Breeding pairs typically mate for life and return to the same territory, which can often contain multiple nests, but only one will be used in any given year.

Nests are large structures about 3-to-6 feet across and 3-to-4 feet high. During courtship, both birds will participate in nest construction and spend time soaring and perching with each other.

Most bald eagles in Arizona typically lay eggs in January or February, but it’s not uncommon to be earlier or later. Clutch size ranges from one to three eggs and both adults share incubation duties until the eggs hatch after 35 days. The hatched nestlings are small, weak, covered in a light layer of down and require constant supervision by the adults who provide protection, warmth on cold mornings and shade on warmer days.

At 3 weeks old, the nestlings grow a thicker coat of down enabling them to better handle a variety of temperatures. The adults will also spend less time at the nest as the nestlings get bigger and more self-sufficient, returning to drop off food or respond to potential threats to the young.

At about 7 weeks old, the nestlings will begin flapping their wings in the nest, a practice exercise that helps develop and strengthen muscles in preparation for their first flight (fledging). On windy days, they will face the wind and hold out their wings to feel the lift and hover, flapping a foot or two above the nest.

Most Arizona bald eagle nestlings fledge in April and May, when they are 10 to 12 weeks old. The nestlings will remain in the nest area for another six weeks before migrating north for the rest of summer.

In Arizona, fish make up 80 percent of a bald eagle’s diet, with the remainder comprised primarily of  waterfowl, such as American coots; mammals, such as cottontails, jackrabbits, ground squirrels and prairie dogs; and reptiles, such as snakes, lizards, and the occasional turtle.

When hunting, bald eagles will soar overhead searching for movement or employing a “sit and wait” strategy, remaining perched for hours scanning the water, waiting for an opportunity to fly down and seize a fish or duck. Eagles will also steal prey by using its size advantage to harass an osprey into dropping a freshly caught fish, then snatch the fish out of mid-air.

Where to see bald eagles 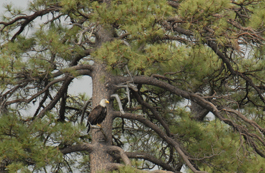 Bald eagles can be seen in higher numbers in October to March at Lake Mary and Mormon Lake near Flagstaff; along the Salt River at Roosevelt Lake; Saguaro Lake; and below Horse Mesa Dam on the Salt River.

A nesting pair at Lake Pleasant can be viewed on the department’s live-streaming camera .  These birds can be seen here from the fall through early summer, although the immediate nesting area is closed to public entry from Dec. 15 to June 15.

Bald eagles are sensitive to human activity near their nests. Areas around active nests may be closed to the public during breeding season. Disturbed eagles may flush from a perch or nest and start circling and soaring. They may also begin vocalizing or appear restless to show they are uncomfortable with nearby activity.

Trained individuals with the Arizona Bald Eagle Nest Watch program monitor many of the nests to ensure eagles are not disturbed during the nesting season.  If you encounter nest watchers, please comply with their requests to help ensure continued survival of Arizona eagles.