The Arizona Game and Fish Department has installed what is believed to be the state’s first live-streaming camera ever placed inside a bat roosting site at the Cluff Ranch Wildlife Area near Safford in southeastern Arizona.

Along with several department personnel, who will be monitoring and studying these fascinating mammals throughout the summer and early fall, the public is invited to assist in these efforts by watching the “bat cam” and then tweeting their observations at @azgfd or by using the hashtag #findthebats. 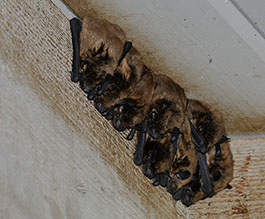 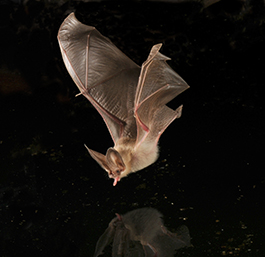 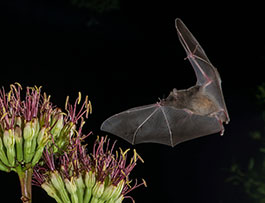 About the “Bat Cam”

One of the best viewing opportunities will take place in the evenings, when the bats leave the roosting site for the night to feed. Other activities viewers might observe include grooming, sleeping, scratching, flying from one spot to another, and various interactions with other bats. The key is to be patient — several minutes may pass before a bat decides to move to another spot — and to check the camera often.

The bats were first observed in an old barn located on the property in 1992. It soon was discovered that at least one species was using the barn to give birth and raise its young, although it’s believed the barn is not being used now as a nursery by any particular species.

In keeping with the department’s mission to conserve and protect all wildlife, the barn was set aside for the bats’ use, and disturbances are kept to a minimum to ensure their safety and continued use of the building.

Take a look at the bat cam

There are several species of bats using this roost including pallid bats (Antrozus pallidus), cave myotis (Myotis velifer), and Yuma myotis (Myotis yumanensis).  Canyon bats (Parastrellus hesperus) have also been found in this roost and other species, at least on occasion, are using the barn for roosting.  Some species use this roost as a stopover during migration where they can rest for a short period before moving on.  The majority of bats viewed on this camera are Myotis sp. and they are for the most part rather nondescript small bats with small to average sized ears and no facial adornments such as nose leafs.  In July, a large group of over 100 Yuma myotis occupied the barn for a few weeks during their migration. Yuma myotis are one of the smaller myotis species weighing about as much as a nickel (0.16-0.25 oz.) and with a wingspan of between 9 and 10 inches.  These bats prefer to forage near or over water and may be seen dipping and dodging over the many ponds on the Cluff Wildlife Area as they pursue moths, beetles and other insects.

Bats are one of the most diverse and widespread groups of mammals on the planet today.  They are found on every continent except Antarctica. One out of every four mammal species alive today is a bat.  The Mexican free-tailed bat (Tadarida brasilensis), which occurs in Arizona, is also thought to be the most abundant mammal on Earth.  Some colonies of this species number in the tens of millions.  Bats belong to the order Chiroptera (meaning hand-wing) and are the only mammals to possess the powers of true flight.  Though many mammals can glide considerable distances from one perch to another, only bats can truly fly.  Worldwide bats are divided into two suborders. Megachiroptera is an Old World group which includes the world’s largest bats such as the flying foxes and other fruit bats.  Microchiroptera is comprised of species found in both the Old and New World, some of which can be quite large but still far short of rivaling the size the largest Megachiroptera.  For the most part Megachiroptera use their keen eyesight and sense of smell to navigate and find food while the Microchiroptera rely primarily on echolocation to interact with their environment. The largest species of bat in the world (flying fox) has a wingspan of nearly 6 feet while the smallest species (bumble bee or Kitty’s hog-nosed bat) has a wingspan of about 6 inches.

Bats can be voracious. Some small species have been known to eat up to 12,000 mosquito-sized insects an hour. It is estimated that a single large colony of free-tailed bats in Texas eats about 200 tons of insects a night. Bats are also incredibly beneficial and not only an important natural control of insect populations, but also are the primary dispersers of seeds in tropical habitats and play a major role in re-establishing vegetation after logging or deforestation. Many bat species are long-lived, perhaps 30 years or more, and reproduce only once a year. If they lose their young they do not have another that year. Most species in Arizona have only one young a year.