Among the owl family (Strigidae), the Great Horned Owl (GHO) is one of the most widespread and common. Due to its variety of selected habitats, this owl can be found all over North America and large portions of South America, though the southwest region tends to host GHOs that are greyer and more pale than those found in other localities. GHOs can be found anywhere from forests, woodlots, stream sides and open country to agricultural landscapes and suburban areas; even adapting well to fairly densely populated human habitats. These raptors are not too picky when it comes to nesting as they will nest in caves, barns, trees, buildings and some even have been reported to nest on the ground. GHOs are very resourceful animals, frequently nesting in an abandoned nest of various species versus building their own. They will typically seek to utilize the nest from the following species: hawks, eagles, herons, and osprey to name just a few. 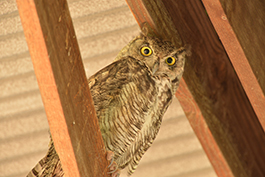 Much like their geographical distribution, the Great Horned Owl diet is among the most diverse of its kind. Similar to other raptors, they will prey mostly on small mammals such as mice, voles, gophers, prairie dogs, bats, rabbits, etc. But they will additionally prey on birds ranging from doves, to grebes, to even other raptors such as hawks. They will even broaden their palate to reptiles, fish and invertebrates. Anything larger than a rabbit is generally too big for Great Horned Owl prey.

Take a look at the Great Horned Owl Cam

Great Horned Owls are distinctive in their prominent feathered ear ‘tufts.” These ear tufts are essentially longer feathers around where the average person might think their ears would be located. Fun fact, owls ears are actually located in a low position on either side of their head, with the left ear being lower than their right ear. This disparity aids in locating/ triangulation prey sound. These raptors will vary slightly in color but for the most part will be grey or brown with a distinctive line around their face. The breast feathers have a speckled look (aka barred) to them and their primary feathers will be striped in dark and light grey or brown. They have bright yellow eyes, typical of what we think of when we think of an owl staring. As juveniles, they are largely covered in whitish-grey downy feathers, but will exhibit the aforementioned vivid yellow eyes.

For the majority of Great Horned Owl area populations, they are considered “resident” birds, meaning they don’t often migrate to a different location in the winter. However, it has been noted that for the most northern populations, during a severe and cold winter, they will move more southerly to escape some of the most extreme conditions.

Great Horned Owls could be considered, largely, a nocturnal species but they will, at times, be active during the day if need be. During their active hours, they spend their time hunting for food and seeking out prey species. To be successful hunters, they will take a high perch (top of a high branch, building, etc.) and will watch for a prey species. When one enters their line of sight, they will swoop down in almost complete silence and use their large and powerful talons to grip onto the prey and carry it to a safe location for the owl where it will not be disturbed while eating.

Great Horned Owls are monogamous, meaning they mate with the same owl each year as long as that mate is available. They will usually start their nesting behavior around late December to early January in Arizona, and will continue their time on the nest until about mid to late May. Their clutch size will range anywhere from 1-6 eggs, with the average resulting in 2 eggs per clutch. They only lay eggs once per year with an incubation period of about 28 – 35 days. Once hatched, the owlets will stay in the nest for another 42 days, flying to nearby branches and other perches about 5 weeks after hatching. The hatching of the eggs will typically happen in mid to late February through March. Both parents will bring the young owlets food in the nest, and both parents will tend to the young for the first several months of life.

Average lifespan of a Great Horned Owl in the wild is about 13 years. In captivity, individuals have been known to live for 28 or more years. Common causes of mortality in Great Horned Owls are disease such as herpesvirus, toxicity from environmental toxins, electrocutions, vehicle strikes, and habitat loss. One of the biggest threats to urban owl populations comes from rodenticides, which are frequently detected in owl remains.

Although protected by the Migratory Bird Treaty Act, Great Horned Owls are considered of “Least Concern” by the IUCN Red list. They are found to be plentiful in Arizona and not of management concern.