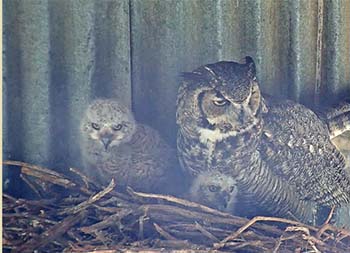 Among the owl family (Strigidae), the Great Horned Owl (GHO) is one of the most widespread and common. Due to its variety of selected habitats, this owl can be found all over North America and large portions of South America. Much like their geographical distribution, the Great Horned Owl diet is among the most diverse of its kind. Similar to other raptors, they will prey mostly on small mammals such as mice, voles, gophers, prairie dogs, bats, rabbits, other birds, etc.

Great Horned Owls are distinctive in their prominent feathered ear ‘tufts.” These ear tufts are essentially longer feathers around where the average person might think their ears would be located. Fun fact, owls ears are actually located in a low position on either side of their head, with the left ear being lower than their right ear!

Although protected by the Migratory Bird Treaty Act, Great Horned Owls are considered of “Least Concern” by the IUCN Red list. They are found to be plentiful in Arizona and not of management concern.