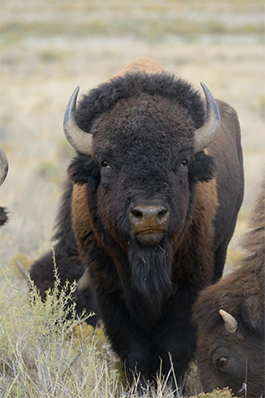 Raymond Wildlife Area is located approximately 20 miles southeast of Flagstaff in Coconino County. The wildlife area consists of approximately 14,637 acres with a topography of gently rolling plains with low ridges.  Elevations vary from 5,000 to 6,000 feet with a habitat dominated by desert scrub grassland and pinyon-juniper woodland.  The area now functions as year-round range for pronghorn antelope, mule deer and bison; and as winter range for elk.

Due to the fact that the wildlife area is winter range for elk and year-round range for pronghorn antelope, mule deer and bison, Raymond Wildlife Area is highlighted as a premier location in northern Arizona for watchable wildlife opportunities.

Raymond Wildlife Area, located in Game Management Unit 5B, is closed to the public every year from May 1 through July 29. The closure is put in place during this time of year to allow the bison to give birth and take care of their calves undisturbed and without human pressure or activity. The Department apologizes for any inconvenience and encourages the public to visit Raymond Wildlife Area when the closure is lifted.

Camping: Camping is permitted from July 30 through April 30 on RWA for no more than 14 days within a 45-day period. Camping is allowed only in the six designated sites directly west of the Wildlife Area Headquarters.

Hunting: Open to all hunting in season as permitted under R12-4-304 and R12-4-318, except posted portions closed to hunting periodically during hunting seasons. Motorized big game retrieval is allowed within the wildlife area.

Wildlife Observations: The Raymond Bison Conservation Herd is a sub-population of the greater Wind Cave bison meta-population. This conservation bison herd–Plains Bison–is managed with other bison originating from Wind Cave National Park in other states to form a collective herd of at least 1,000 bison, ensuring their genetic integrity. They contain high levels of genetic variation and no evidence of domestic cattle introgression.

Hiking: Yeager Canyon Trail- Located on the east side of headquarters. It is approximately 2 miles long and is a light to moderate hike.

Directions: RWA is approximately a one hour drive east of Flagstaff off I-40. To get there, take I-40 east to exit 225, the “Buffalo Range” exit. Proceed south of I-40 following the signs approximately 10 miles on a maintained gravel road to the RWA headquarters.