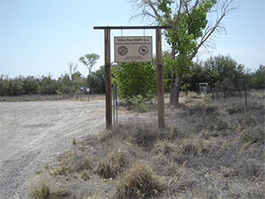 Willcox Playa is best known for its wintering population of sandhill cranes that migrate to the playa in large numbers, particularly in wet winters. It is not unusual to see several thousand cranes in winter at the power plant ponds viewing area on the southwest side of the playa, or at the Arizona Game and Fish Department’s 600-acre Wildlife Area on the southeast side. The cranes feed and court, but after February migrate to their summer breeding grounds in the northern Great Plains.

Birding is best from mid-October through March, when more than 15 species of birds of prey may also be found here. The annual Wings over Willcox Birding and Nature Festival takes place in nearby Willcox each January and features guided tours.

Camping: Overnight public camping is allowed in designated areas only, for no more than 14 days within a 45-day period. There are no facilities at the Wildlife Area

Hunting: Portions open to all hunting in season as permitted under R12-4-304 and R12-4-318, except portions of the wildlife area closed to entry and areas closed to Sandhill Crane hunting. Game management unit 30A.

Hiking: This wildlife area has hiking trails or developed roads that meander through the habitat and a signed road that takes you to Crane Lake. Parking is at designated sites only and the wildlife area is open from sunrise to sunset.

Wildlife observed in the area

Birds *Important Bird Area*: Within the Willcox Playa and Cochise Lakes Global Important Bird Area. Willcox Playa also supports other large waterbirds, including white-faced ibis, as well as many raptors, including several wintering hawks. Red-tailed hawks, northern Harriers, Harris’s hawks, prairie falcons, bald and golden eagles, as well as caracaras, great horned owls, and burrowing owls all make use of this surprisingly diverse habitat. The shrubs and trees on the periphery of the playa support migrating northern flickers, white-necked ravens, and many songbird species. Sometimes more than 10,000 birds will congregate at the playa.

Willcox Playa is a sparsely-vegetated desert grassland, strongly dominated by alkali sacaton and saltgrass, with some cover of little bluestem and other grasses. Shrub cover increases towards the periphery, with saltbushes, mesquites and non-native tamarisk. Scattered Fremont cottonwood and Goodding’s willow grow in or along the network of ditches that have been built to drain sections of the playa over the past century. The playa also supports a population of a rare plant species, the Chiricahua Mountain tansy-aster.

Sulphur Springs Valley Loop – From Tucson, take I-10 east to Hwy. 191, then south on Hwy. 191 to junction with Hwy. 181 (Sunizona). Continue south towards Elfrida and take Central Highway south to Double Adobe Road, then east back to Hwy. 191 and north to McNeal.