The nest is primed, and the live-streaming camera is already broadcasting the day-to-day life of a pair of bald eagles hoping to raise a family inside their Lake Pleasant Regional Park nest.

Nearly 400,000 viewers tuned in for the inaugural season to watch the unfiltered drama that transpired earlier this year. They saw competing male bald eagles repeatedly divebomb each other for territory, and watched as a total of four eggs were laid in two separate clutches that were later scavenged by ravens and a ringtail.

So what’s in store for season two?

“Some nestlings, we hope!” said Jeff Meyers, watchable wildlife program manager for the Arizona Game and Fish Department (AZGFD). “Despite lacking young last season, the bald eagle camera was a huge success because viewers saw the real-life struggles of nature. That struggle is real, and through these cameras, the public can gain a new appreciation for our fascinating wildlife.”

The bald eagle cam is one of four wildlife cameras offered by the department, which also provides seasonal views of wintering sandhill cranes in southeastern Arizona, a bat roost at Cluff Ranch Wildlife Area and an underwater pupfish cam. A fifth — a camera placed near a great horned owl nest — is on the horizon and will join the other streaming feeds later at www.azgfd.gov/livecams.

The public is invited to check the cameras often. It’s not uncommon for there to be no activity in the nest, as the birds will leave multiple times to feed. If eggs are laid, the viewing will be more consistent and predictable.

Records show bald eagles inhabited nests at Lake Pleasant since at least 1979, with the first documented nesting attempt occurring in 1984. While no young were produced until 1993, 28 birds have since survived to take their first flight, known as fledging.

Statewide, there are a record 74 breeding areas, which helped to produce 99 eggs and 72 eagle nestlings, with 65 birds fledging the nest, according to AZGFD’s 2019 annual survey.

For more information about what AZGFD does to manage the state’s 800-plus native species, including bald eagles, visit www.azgfd.gov. Those wanting to support AZGFD’s mission to conserve and protect Arizona’s wildlife can sign up for a Conservation Membership package at www.azwildlifehero.com.

AZGFD in the News: Oracle Crossing, the new wildlife crossing near Tucson

Kudos to FOX 10 Phoenix for its recent story about the overwhelming success of a new wildlife crossing that was built over State Route 77, or Oracle Road, near Tucson.

Jeff Gagnon, statewide research biologist for the Arizona Game and Fish Department, said the structure that stretches across the expanded six-lane highway allows wildlife to safely travel between the Tortolita and Catalina mountains without putting motorists in peril. So far, cameras have documented more than 1,100 animal crossings by 13 different species.

“Wildlife has a hard time moving across roads, and eventually it causes wildlife fragmentation,” Gagnon said. “So these animals can’t get across roads for food, mates, water, migration . . . If the crossings aren’t there, then they risk crossing at grade, and vehicles can hit them. People can get hurt, and wildlife can get hurt, so having these wildlife crossings helps to resolve that.”

According to Gagnon, more than 8,000 animals have used similar crossings throughout the state, with about 4,000 of them being mule deer. He said deer seem to prefer the overpasses, while other animals, like javelinas, tend to favor the underpasses. Critters like coyotes and bobcats will utilize both.

Walk on the Wild Side: Arlington Wildlife Area 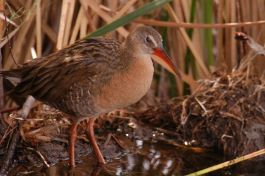 The Arlington Wildlife Area is located along the west bank of the Gila River, about 3.5-miles south of Arlington and 15 miles southwest of Buckeye.

The objectives for the 1,500-acre wildlife area are to maintain habitat for waterfowl, doves, the endangered Yuma clapper rail and other wildlife, and to provide wildlife viewing and other compatible, wildlife-oriented recreational opportunities.

The wildlife area has two ponds totaling about 10 acres, an extensive stand of salt cedar, and about four miles of river channel, including running water, cattails and other emergent vegetation, sand and gravel bars, and riparian trees such as cottonwood, willow and salt cedar. 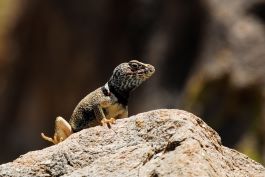 Dinosaur descendants are regular inhabitants of desert backyards, but most of us know little about even the most common of lizard species. Which one rids us of unwanted insects? Which ones are venomous? Learn the basics about Arizona reptiles from Jeff Meyers, watchable wildlife program manager for the Arizona Game and Fish Department. The cost is $34 per person ($27 for members). Register

Take a black light into your backyard at night, and you might discover a few scorpion neighbors. While some are poisonous, most of these crawly critters prefer to keep to themselves. Learn more about these misunderstood creatures from Jeff Meyers, watchable wildlife program manager for the Arizona Game and Fish Department. The cost is $34 per person ($27 for members). Register

Spend a day with AZGFD biologists and award-winning photographer George Andrejko at our Commission-owned property in McNeal, Ariz. This wildlife area is a roosting and loafing place for more than 20,000 sandhill cranes each year. Get an exclusive, up-close-and-personal look at these birds while taking advantage of a unique photographic opportunity with a professional wildlife photographer. The cost is $50 per person, and all fees support the department’s watchable wildlife program. Register 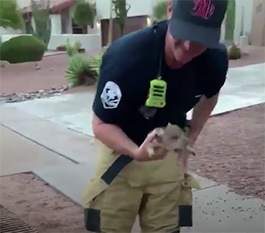 It was collaboration at its finest.

When a pair of baby javelinas, each smaller than a football, fell through a storm grate, a Mesa Fire and Medical Department crew was there to rescue them.

A video tweeted by the department showed two firefighters holding the “reds,” with one of the firefighters heard saying “They’re so freaking cute.”

The department tweeted that it worked with the Arizona Game and Fish Department and the Southwest Wildlife Conservation Center to help the young animals, saying in the post “Such collaborations make it possible for us to better serve our community.”

Video of the Month: Meet the Mount Graham red squirrel 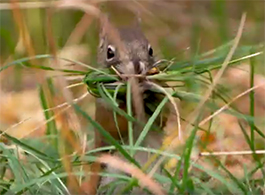 The endangered Mount Graham red squirrel is a subspecies that can only be found in the upper-elevation conifer forests of the Pinaleño Mountains of southeastern Arizona.

The squirrel’s population peaked at about 550 in the late 1990s, but typically ranged between 200 and 300 before the Frye Fire in 2017. In an annual survey this fall, a minimum estimate of 78 squirrels were found, which is in line with the 75 squirrels found in 2018.

“Much work must be done to help conserve and protect this resilient, intrepid animal, but consistent estimates of the population since the fire are encouraging for the Mount Graham red squirrel’s overall recovery,” said Tim Snow, AZGFD terrestrial wildlife specialist.

“This squirrel has faced significant, daunting challenges, but the Arizona Game and Fish Department and our partners will continue our work to give it a fighting shot at survival.”