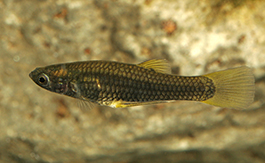 Due to the ongoing on-the-ground conservation efforts of the Arizona Game and Fish Department (AZGFD) and its partners, data shows the endangered Gila topminnow has battled extinction and is prevalent enough to be downlisted to threatened.

In a petition to the U.S. Fish and Wildlife Service (USFWS) in May 2018, the department outlined that Gila topminnow populations can now be found in multiple locations within the species’ range and that recovery benchmarks in USFWS’s 1984 recovery plan have been met. Therefore, the fish should be reclassified from endangered to threatened.

USFWS agreed last month, documenting the petition as “substantiated” in its 90-day finding.

“After decades of dedicated conservation work, more than 70 populations of Gila topminnow have once again been established throughout the species’ natural range,” said Anthony Robinson, AZGFD Gila Basin native fisheries lead. “This project is a testament to the  Arizona Game and Fish Department’s commitment to conserve and protect wildlife, by fighting to bring this fish from the brink of extinction, while meeting criteria laid out by the U.S. Fish and Wildlife Service’s 1984 Recovery Plan.”

The petition is the first of its kind submitted by a state wildlife agency. USFWS since has  initiated a status review and will issue a 12-month finding to address whether reclassifying the Gila topminnow to threatened or even delisting is warranted under the Endangered Species Act.

The Gila topminnow is a small, short-lived fish with a lifespan of about one year (although females can live for about two years). As its name suggests, topminnows spend the majority of their time near the water’s surface to feed on plankton and small crustaceans and invertebrates, including mosquito larvae.

Historically, topminnow were the most abundant fish species in the Gila River basin from western New Mexico to central and western Arizona. Over time, a combination of habitat loss, degradation and predation by non-native fish species brought the topminnow to the brink of extinction.

It was listed as a federally endangered species in 1967. Since then, AZGFD and its partners have worked to restore topminnow populations with the goal of delisting the fish. For more information on topminnows, visit www.azgfd.gov/wildlife and click on “Nongame & Endangered Wildlife.”

The sun is already baking off what’s left of the warm morning air, when Arizona Game and Fish Department (AZGFD) bat biologist Joel Diamond carefully walks to the edge of a loose mound of gravel and tosses a rock into the abandoned mineshaft below.

To help address the issue, AZGFD, in partnership with Arizona State Mining Inspector and U.S. Bureau of Land Management, installs gates designed to keep people out of the abandoned mines, while allowing bats easy access to the cool roosts deep inside.

“Before this was installed, the edges were very slick,” Diamond said, while sitting near the now-secured mine opening. “If you were to take a wrong step, you could have slid right into the bottom and it would have been a one-way trip — there’s probably no coming back. By installing these structures, we’re able to protect the public and bat habitat.”

Walk on the Wild Side: White Mountain Grasslands Wildlife Area 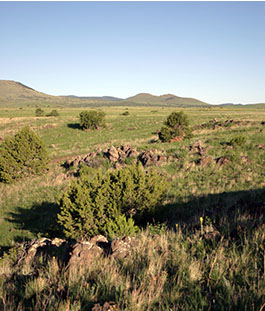 Located near the towns of Springerville and Eagar in the White Mountains, this 2,850-acre gem offers plenty of opportunities for wildlife viewing, birdwatching, hiking, or just simply enjoying the changing leaves and crisp, clean air.

The Ocote Trail is a 2.6-mile hiking trail of moderate difficulty that overlooks and loops a large draw featuring juniper woodland, grassland and ponds. There’s a good chance of seeing pronghorn, rock and golden-mantled squirrels, chipmunks and rabbits, or maybe even an elk, coyote, badger, striped skunk or gray fox.

Both mountain and western bluebirds are found in the junipers in winter. The meadows and grasslands offer opportunities to see golden eagles, northern harriers, red-tailed hawks and other raptors. Birdwatching is best in spring, summer and fall.

Directions: From Eagar, drive west on State Route 260 about five miles to the junction of the road to the Springerville transfer station at milepost 391.4. Follow the paved road north, then west .6 miles to the southwest corner of the first hill. When the road turns north again, take the dirt road to the left three miles, in a northwest direction, to a cattle guard on the fence-line boundary. Cross the cattle guard and proceed a short distance to the parking area.

Park at designated sites only. The road is suitable for passenger cars. The area is open from sunrise to sunset. 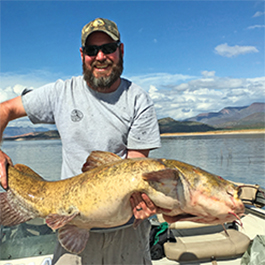 Curt Gill covers miles of waters every year to ensure that fish have good water in which to breathe.

Gill’s career has taken him from Wyoming, where he was a contract biologist who studied and helped to protect native fish species, to Arizona, where he serves as aquatic wildlife program manager at the Arizona’s Game and Fish Department’s regional office in Mesa.

Gill supervises three fisheries specialists, all of whom share a mission of managing the region’s waters and fish. Two of them specialize in sport fish, while the other is part of the Conservation and Mitigation Program (CAMP). The program was put in place to avoid environmental setbacks for fish in Arizona waters.

Gill said one of his goals throughout his career has been to leave the resource as good, or hopefully better, than he found it. He points to the completion of a two-year project at Canyon Creek that began in 2005. The department received a grant that allowed the team to help restore the creek from the impacts of wildfire, as well as from browsing and grazing by elk and livestock.

“We enhanced the habitat and created a better-functioning system to support fish,” Gill said. 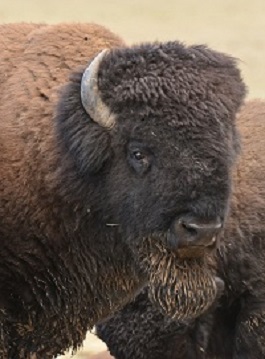 Celebrate National Bison Day by attending a bison viewing workshop Nov. 2 at Raymond Wildlife Area, located about 30 miles east of Flagstaff. Learn about the history, ecology and conservation of the state’s largest terrestrial mammal from the department’s Rob Nelson, habitat and lands program manager in Flagstaff. The workshop will feature two sessions (9 a.m. or 10:30 a.m.). The deadline to register is Oct. 31. Registration is limited to 20 participants per session (recommended for those 12 and older). The cost is $40 per person and includes lunch (bison burgers, brats, sides). Call (602) 509-8122, or email event coordinator Cheyenne Dublach at cdublach@azgfd.gov.

Learn about the natural history and modern biology of an iconic species, the black bear. Black bears are opportunistic feeders, and have complex and interesting lives. The event includes a short tour of Southwest Wildlife Conservation Center, followed by an hour-long program by the department’s Jeff Meyers, watchable wildlife program manager. The cost is $30 per person ($20 for children 3-12). Children 2 and under are free. Register 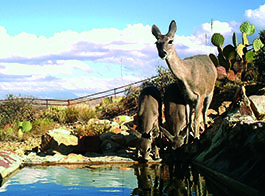 Let’s face it: Arizona’s monsoon was just a drop in the bucket. That means wildlife needs a constant supply of life-sustaining water now more than ever. ABC15 and Sonoran Living head out to a water catchment to learn what the Arizona Game and Fish Department is doing to help keep wildlife hydrated and how everyone can help.