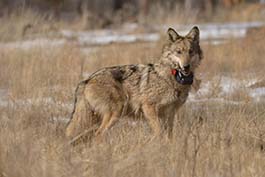 “The count shows we have more wolves, more breeding pairs and more pups born in the wild than ever before,” said Amy Lueders, regional director for the U.S. Fish and Wildlife Service in Albuquerque, N.M. “This is the second year we have seen a significant increase in the wild population of Mexican wolves, a success that is directly tied to the science-based, on-the-ground management efforts of the Interagency Field Team.”

“The numbers highlight the wolf’s progress in the wild,” said Jim deVos, assistant director of wildlife management for the Arizona Game and Fish Department (AZGFD). “The results of this census are very important as they reflect the great progress being made in the recovery of the Mexican wolf in the U.S. The increase in the Mexican wolf population is not an isolated year, but rather a continuum of increases over the last 10 years.”

Working with the Mexican government, the Service in 1977 began developing a captive breeding program to restore the wolf’s numbers. It started with seven wolves, aiming for the day the program could release wolves into the wild. That day came in 1998, when the Service, in cooperation with AZGFD, released 11 wolves within a range called the Mexican Wolf Experimental Population Area in Arizona and New Mexico. In 2011, the program expanded to Mexico with the release of wolves in the Sierra Madre Occidental. Mexico currently estimates there are approximately 30 Mexican wolves in the Sierra Madre Occidental.

In November 2017, the Service completed a revised Mexican Wolf Recovery Plan, after working with state agencies and other partners. The recovery plan uses the best available science to chart a path forward for the Mexican wolf that can be accommodated within the subspecies’ historical range in the southwestern U.S. and Mexico. This revised plan provides measurable and objective criteria for successful recovery. When those goals are met, the Service will be able to remove the Mexican wolf from the list of endangered species and turn management over to the states. 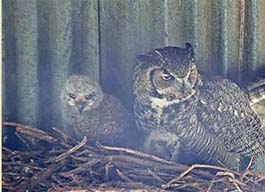 A great-horned owl’s nest, tucked high in the wooden rafters of a pole barn at the Whitewater Draw Wildlife Area, just got a little more crowded.

After patiently sitting on the nest since early February, an adult female has been joined by a pair of nestlings that hatched last month, according to Arizona Game and Fish Department (AZGFD) officials. As the female owl begins to raise her young brood, her mate has been diligent in delivering prey to the nest.

As for the owls, Meyers said both adults share in the feeding of their young, which are expected to fledge (develop wing feathers that are large enough for flight) in early May. 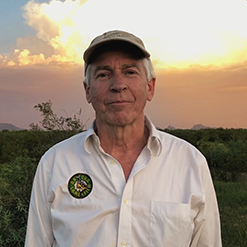 The Arizona Game and Fish Department looks to Tom Jones as the expert when it comes to the conservation of the state’s amphibians and reptiles.

The fact that Game and Fish is charged with overseeing these critters in the first place often comes as a surprise to many people, but they’re part of the 800-plus species managed by the department. In fact, most of the species Jones and his staff deal with are protected under the Endangered Species Act, or at least face ongoing conservation challenges.

“But it’s our responsibility to make sure we keep those common species common, and that we get the more rare species back to where they were before so they don’t need any protections from us or from the federal government.”

While his team performs a lot of the field work these days, Jones enjoys getting out and being “hands on” whenever he can.

“I find everything to be fascinating,” he said. “We get to see neat amphibians and reptiles all the time, and they all fascinate me. I really enjoy getting out into the field and seeing them.” 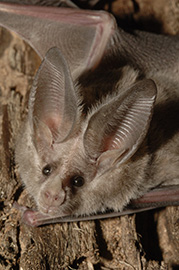 Did you know that Arizona is home to 28 species of bats? Or that the Mexican free-tailed bat is the state’s most common species? Would you know what to do if you found an injured or baby bat?

For answers to these questions, and more, check out this video presentation from azcentral.com.

Video of the Month: ‘Tis the season for rattlesnakes 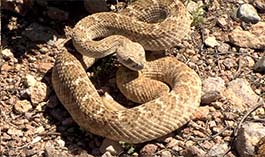 Spring has sprung, and reptiles like rattlesnakes and Gila monsters are coming out to enjoy the warm weather. While these iconic desert critters will go to great lengths to avoid humans, here’s what you need to know if your paths should ever cross.