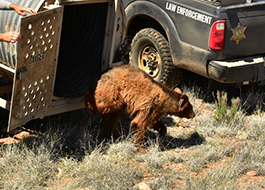 Three bear cubs rescued last April after their mother was hit and killed by a vehicle near Oracle, Ariz., were released back into the wild last week in a remote area in central Arizona.

The release was conducted by the Arizona Game and Fish Department (AZGFD) in collaboration with the Southwest Wildlife Conservation Center (SWCC).

At the time of last year’s accident, the cubs, all females, were rescued by Arizona Department of Public Safety troopers with assistance from the Hayden Police Department, AZGFD, and a good Samaritan. They were transported by Game and Fish to the SWCC facility in Scottsdale for care, where they have been for the past year.

“The situation provided a unique opportunity to rehab these bears and try to give them a second chance at life in the wild,” said Dustin Darveau, terrestrial wildlife specialist for AZGFD. “We partnered with Southwest Wildlife Conservation Center because of their knowledge and experience in working with bears, and their facility being able to handle the bears in a secluded area with limited human interaction.”

“Right now is about the time they would be leaving their mother and venturing out on their own, so we’re trying to simulate that as best we can in a controlled environment,” said James O’Brien, clinic manager and veterinary technician for SWCC. “We’ve minimized human contact in caring for them. They are big enough and ready to be released back into the wild.”

Before being released, the bears were tranquilized, given a health assessment, and each fitted with a GPS ear tag before being placed in the trailer that would carry them to the approved release site in a backcountry area.

The ear tags send tracking data to a satellite, which is then downloaded to a computer. This allows biologists to monitor the bears’ movements within their habitat, helping assist bear management in the future.

This was a fortunate situation where releasing the bears back into the wild was a viable option. There are sometimes circumstances where cubs might be placed with a zoo or captive care facility, if space is available (and it often isn’t). Sometimes a bear must be humanely euthanized if it poses a threat to public safety.

“In this particular situation, releasing the bears back into the wild was a viable option under AZGFD’s bear management policy,” said AZGFD field supervisor Pat Crouch. “These female bears are healthy, have not posed a risk to the public, and have been cared for at SWCC in a manner that minimized the chance of habituation to their human caretakers.”

The three sibling bears will likely stay together until they get accustomed to their habitat, and then they’ll move apart on their own.

AZGFD and SWCC both emphasize that people can do their part to help keep wildlife wild.

“Enjoy wildlife from a distance,” said Linda Searles, founder and executive director of SWCC. “Don’t feed them, don’t leave out food sources or attractants that make them come up near your home. Learn about them, take pictures of them, but let them be wild.” 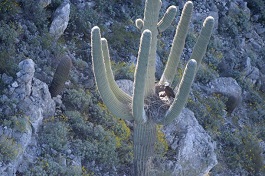 It has long been speculated that bald eagles could utilize saguaro cacti as nesting sites. Now the Arizona Game and Fish Department (AZGFD) has documented proof.

During recent eagle survey flights conducted by the department, officials were delighted to discover a pair of bald eagles with eaglets nesting in the arms of a large saguaro near a central Arizona reservoir.

According to  Kenneth “Tuk” Jacobson, AZGFD’s raptor management coordinator, biologists searched historical records in the 1970s for bald eagle nesting sites in Arizona. They discovered a 1937 record from Kermit Lee of Lee’s Trading Post where there is mention of large nests in saguaros along the lower Verde River that were believed to be occupied by bald eagles. There was no documentation or photos to back up those sightings.

“It’s been an 18-year trek for me, keeping my eye out for a bald eagle nest in a saguaro, so finally finding one is amazing,” Jacobson said.

Walk on the Wild Side: Allen Severson Memorial Wildlife Area 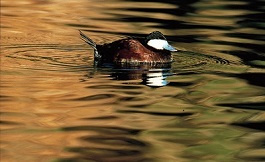 Pintail Lake consists of three ponds with 14 nesting islands, while South Marsh is a resting and feeding area. Pintail Lake contains 50 acres of water within a fenced area of 250 acres; South Marsh fluctuates from 15 to 50 acres of flooded meadow. The marsh complex is supplied with secondary treated effluent from the City of Show Low. Pintail Lake was developed in 1979 as the first waterfowl marsh utilizing treated wastewater in Arizona.

Recreational opportunities include promoting environmental education, and recreational pursuits like wildlife viewing. A paved footpath extends from the parking lot about 250 yards to a concrete wildlife-viewing blind. Interpretive signage can be found along the path and inside the blind.

The marsh attracts many species of waterfowl, with several hundred utilizing the area during the spring migration. Other birds commonly seen or heard in the spring and summer include the Virginia rail, Sora, yellow-winged blackbirds and American coots. Peregrine falcons often are observed in the spring in pursuit of ducks. Common mammals in the area include elk, mule deer and pronghorn.

The area is located about 4.5 miles north of Show Low, in Navajo County.

AZGFD in the News: What’s that owl doing? Wildlife cams offer a link to the wild for Arizonans at home 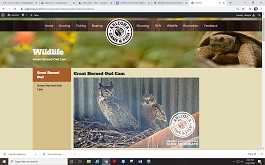 Kudos to The Arizona Republic and reporter Erin Stone for a recent article about how viewership has spiked on AZGFD’s live-streaming wildlife cameras.

As homebound Arizonans continue to look for things to do, regular viewers have shifted their attention to a great-horned owl nest that’s getting a little crowded for a pair of growing owlets  that hatched just before the start of the pandemic. The young ones are expected to leave the nest within the next week or so.

“Our whole purpose with these cameras is really to give people this intimate look into wildlife, and to educate the public and tell the story of these critters,” said Jeff Meyers, watchable wildlife program manager. “It helps to foster a passion for conservation and that’s really what our goal is.” Read the article 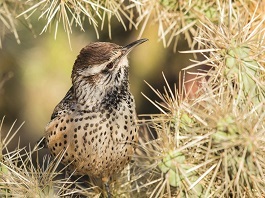 What kind of bird lives only in the hottest, most arid regions of the Southwest and Mexico? Or purposely builds its nests where predators fear to tread? Oh, and what bird rarely needs even  the smallest sip of water to survive?

Only the perfect state bird, the cactus wren. Arizona claims the largest of seven wrens found in the U.S. for its own. Maybe it’s because the cactus wren is a one tough bird, with perhaps a bit of an attitude.

Although there is some belief that the cactus wren became Arizona’s state bird in 1973, it was actually adopted in 1931 — 19 years after statehood. The reason? The General Federation of Women’s Clubs wanted to have a state bird designated before its Biennial Council in Phoenix that year. 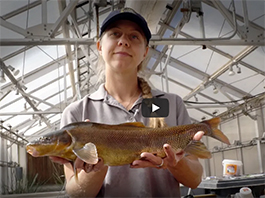 The endangered razorback sucker, a fish native to the Grand Canyon, has been hybridizing with another Colorado River fish — the flannelmouth sucker. AZGFD biologist Pilar Wolters is conducting a five-year research project to learn how hybridization could impact the recovery of wild razorback suckers.