Partner Projects: Young bald eagle released back into the wild 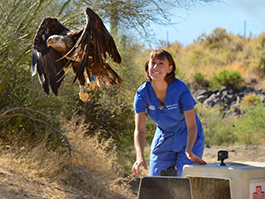 After taking a graceful, half-mile flight across Horseshoe Lake, a 3-year-old bald eagle released back into the wild by the Arizona Game and Fish Department (AZGFD) and Liberty Wildlife was truly free once again.

It was a fitting conclusion for the bird, which was found in February at a dairy in Queen Creek.  Left untreated with a shattered femur, it certainly would have died. Four months later, a small group of onlookers watched with excitement as this national symbol glided across the water’s surface, declaring its independence just days ahead of the Fourth of July holiday.

“As an agency, we strive to conserve and protect all of the state’s wildlife, but participating in something like this ahead of the Fourth of July is something special,” said Kyle McCarty, the department’s raptor biologist. “This eagle now has another shot at survival, and in a couple of years, when it becomes of breeding age, it may go on to bolster Arizona’s growing bald eagle population. For us, every eagle counts.”

In 2016, a few miles downstream along the Verde River, McCarty placed numbered metal bands around the bird’s legs while it was a nestling. This past winter, the bird was presumingly healthy and flourishing  — until it somehow shattered its left leg and later was discovered on the ground.

X-rays were taken at Liberty Wildlife, revealing extensive damage that required a 45-minute surgical procedure to insert a metal rod and screws.

“It was a pretty severe break and took longer to heal than we had expected, but with time and great care from our medical team, including volunteer veterinarian Dr. Stephanie Lamb, the leg was repaired and he’s able to grasp well with it,” said Laura Hackett, Liberty Wildlife biologist.   “He is the 105th bald eagle that Liberty Wildlife has been able to help return back into the wild in its 38-year history.”

For more information about what AZGFD does to manage the state’s 800-plus native species, including bald eagles, visit www.azgfd.gov. To learn more about what Liberty Wildlife does to rescue and rehabilitate wildlife, visit www.libertywildlife.org. 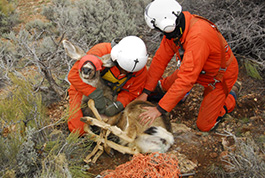 The department — in coordination with the U.S. Department of Interior (DOI), U.S. Forest Service Coconino National Forest, Hopi Tribe Department of Natural Resources and the Mule Deer Foundation — recently began the study by safely capturing and collaring 20 mule deer around and west of the San Francisco Peaks, just north of Flagstaff.

“Studies such as these are instrumental for us to learn where local wildlife populations move within their natural habitat,” said Jeff Gagnon, AZGFD statewide research biologist. “This data will guide management decisions to help us conserve and protect local deer populations, and enhance the safety of motorists throughout northern Arizona.”

AZGFD officials utilized people on the ground to scout for deer and to guide overhead aircraft (and an awaiting helicopter) toward the herd. Once spotted, the helicopter gave chase and if the net-gunner’s aim was perfect, the animal was immobilized long enough for the copter to land and a handler or “mugger” to hop out.

Once on the ground, the mugger restrained and placed a blindfold on the deer to calm the animal. Biologists then placed an ear tag, took blood samples, its temperature and placed the GPS collar around the deer’s neck, before turning the animal loose to rejoin the herd.

The collars collect and transmit location data every three hours, which provides biologists a wealth of information on daily and seasonal movements that can later be used by traffic engineers and wildlife officials to guide future road projects designed to mitigate wildlife/vehicle collisions. The collars are designed to automatically drop off after three years.

“One challenge in managing wildlife is working to address the impacts that roads, highways, railroad tracks and even fences have on wildlife,” Gagnon said. “Each one these essentially serve as boundaries that can lead to habitat fragmentation. Finding solutions to address such issues benefits Arizona’s wildlife and helps us to make informed decisions to ensure they are around for future generations.”

Walk on the Wild Side: Lamar Haines Memorial Wildlife Area 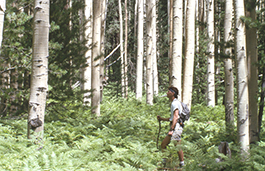 The Lamar Haines Memorial Wildlife Area is a prime destination for those seeking relief from the August heat, looking to do some wildlife viewing, or wanting to taking one of the best small hikes in Arizona.

Located 12 miles north of Flagstaff, on the slopes of the San Francisco Peaks, the property consists of relatively undeveloped old-growth forest, wet meadows and perennial springs. All kinds of wildlife abound here, including deer and elk, and birds like woodpeckers, the Mexican spotted owl and northern goshawks. It’s no wonder Lamar Haines is popular with birdwatchers and nature photographers.

The area also features an easy 1.5-mile loop hike through dense forest towering with aspen,  ponderosa pine and fir trees. The trail leads to Ludwig Veit’s dilapidated cabin that was built in 1892. The trail also bears a plaque commemorating Haines, a popular conservationist from Flagstaff.

To reach the Lamar Haines Memorial Wildlife Area, drive north on Highway 180 from Flagstaff and turn right on Snowbowl Road. Go about 4.5 miles and park on the right. The area is managed by the Arizona Game and Fish Department. 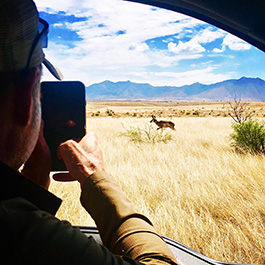 The Arizona Game and Fish Department’s regional office in Tucson, in partnership with the Arizona Antelope Foundation, recently completed a successful ground survey of pronghorn in Sonoita, the San Raphael Valley and Allen Flat in southeastern Arizona. 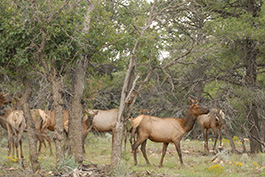 Here’s an opportunity to see hundreds of elk in one place, at one time. Participants can register for one of two sessions, then attend a presentation at Mormon Lake Lodge (Town Hall) to learn about elk in Arizona before heading out to see these majestic animals at Mormon Lake. Walking will be minimal during the field trip portion of the sessions. Time: 9 a.m.-noon, 10:30 a.m.-1:30 p.m. Cost: $20. Register

Though bats may seem scary, they’re actually quite beneficial, eating a vast number of harmful insects. There are 28 species of bats in Arizona, where their populations appear stable and even increasing, at times. Join the department’s Jeff Meyers to learn more about these fascinating flying creatures and how we can protect them, then head out to the Garden to see them at dusk. Time: 6:30-8:30 p.m. Cost: $34 ($27 for members). Register

Arizona is home to 28 species of bats, many of which live and forage right in our own backyards. Join the department’s Jeff Meyers to meet these misunderstood and fascinating creatures in person. The registration fee includes a guided tour of Southwest Wildlife Conservation Center’s sanctuary. Light refreshments will be provided. Time: 7-10 p.m. Cost: $50. Register

Video of the Month: Cheers to Arizona’s Wildlife!

Through an innovative collaboration, the Arizona Game and Fish Department and Mother Road Brewing Co. present: Conserve and Protect Kӧlsch. In a creative twist on funding for wildlife conservation, Flagstaff-based Mother Road Brewing Co. has released special-edition cans of its Conserve and Protect Kӧlsch-style ale. A portion of the proceeds from the sales of Conserve and Protect Kӧlsch cans will be donated to the department to support its critical, on-the-ground conservation work that is done without any general fund tax dollars. In addition to supporting this collaboration, the public can contribute directly to Arizona’s wildlife by becoming a Conservation Member at azwildlifehero.com/join. Your annual gift will ensure the department’s science-based, on-the-ground conservation work can continue to make a difference for generations to come.