Between Oct. 18-29, 2020, AZGFD officers found the remains of several fresh deer, including bucks and does near the intersection of Date Creek Road and OX Ranch Road northwest of Congress. Officers determined that the deer had been skinned out and the meat taken. There were no open deer hunts in the area during this time. Evidence found at the scene suggests this was not a one-time event and that the suspect(s) frequented the area and spent considerable time there.

AZGFD Wildlife Manager Brian Dietz states, “The location is near a well- traveled area along Date Creek Road. Anyone out scouting, recreating or just passing through may have witnessed something that could help us resolve this case. Poachers are not hunters; they are criminals stealing from the residents of Arizona.”

Anyone who may have information is encouraged to call the Operation Game Thief Hotline toll-free at 1-800-352-0700. Caller identities will remain confidential and callers can report anonymously if needed. You can also report online at https://www.azgfd.com/ogt. Callers should reference OGT #20-003449 when reporting information on this case.

Outdoor recreationists are reminded that off-highway vehicle (OHV) travel is limited to roads, trails, routes or areas that are opened as indicated in rules and regulations by the land management agency.

PHOENIX – A peer-reviewed scientific paper published last week in the conservation journal Diversity and Distributions demonstrates that the Mexican wolf’s historical range in the southwestern U.S. and Mexico contains ample high-quality habitat to focus recovery efforts within that range.

The research, a multi-year collaboration between Mexican and U.S. scientists, is significant because it supports the 2017 Mexican Wolf Recovery Plan and contradicts the contention of some advocacy groups that Mexico does not include enough adequate habitat to support recovery efforts there.

Benefitting from new mapping data and cutting-edge habitat analysis methods, the research is the first to include an evaluation of prey biomass across the landscape — a critical element to assure sustainable wolf populations for the future. Besides the area occupied by the current central Arizona and New Mexico population of Mexican wolves, two other large areas of high-quality wolf habitat were identified in the Sierra Madre mountains of Mexico, which mirror areas defined by Defenders of Wildlife in their 2006 publication “Places for Wolves.”

“This habitat analysis provided the foundation for the current Mexican Wolf Recovery Plan and will guide continued collaborative recovery efforts with Mexico,” said Clay Crowder, AZGFD assistant director, wildlife management division. “Mexico contained 90% of the Mexican wolf’s historical habitat, so it is unjustified to force recovery entirely in the United States. Efforts to recover Mexican wolves north of historical range, as some have advocated, are not only unnecessary but against federal 10(j) regulations, because suitable habitat exists within historical range.”

Recovery efforts are well underway in both countries with a minimum of 163 Mexican wolves in the U.S. and about 30 in Mexico.

The Arizona Game and Fish Department (AZGFD) recently updated its online systems to provide enhanced features for its customers.

What must you do to access the updated features? AZGFD sent out emails Dec. 8–10 to portal account customers (to the current email address the department has on file) with instructions about how to update portal accounts. The email was sent from customer@azgfd.gov via amazonses.com, and the subject line reads: “Your Arizona Game and Fish account has new features! Log in today.” If you still have access to that email, make sure to click the link in the body copy to confirm your account and update your login information. It is imperative you complete this step.

AZGFD strongly recommends you do this before purchasing a hunting or fishing license or applying for the upcoming elk and pronghorn draw.

If you cannot find the email that AZGFD sent Dec. 8–10, click here and you will be able to request a password reset on your existing portal account. You must know the user name or email associated with your portal account to activate the password reset.

If you updated your account information after Dec. 8, no need to take further action.

News release from the Office of Governor Doug Ducey

“Clay’s dedication to wildlife conservation and to his community make him a great fit for the Game and Fish Commission,” said Gov. Ducey. “I look forward to his service on the commission and know that he will serve Arizona well.”

Hernandez is a longtime hunter and angler and has dedicated nearly 30 years to wildlife conservation. He is a member of Trout Unlimited, the National Wild Turkey Federation, the Arizona Elk Society, the Arizona Antelope Foundation, and Project Healing Waters of Southern Arizona. He has served as president of the Old Pueblo (Tucson) chapter of Trout Unlimited and was on the board of the Tucson Chapter of the National Wild Turkey Federation. He has volunteered as a fly fishing guide for Project Healing Waters in Arizona, Colorado and Alaska. He also volunteered for four years in an Outdoor Studies class for a Tucson High School.

“I am humbled and honored to be able to serve the Game and Fish community of Arizona in such an impactful way and am ready to hit the ground running,” said Hernandez. “I look forward to working with my fellow commissioners, and I thank Governor Ducey for this opportunity.”

Hernandez has called Arizona home for more than 40 years. He has been a practicing attorney in Tucson since 1986. He received a Bachelor of Science degree from Arizona State University in 1981 and his Juris Doctorate from the University of Arizona in 1986. He is a licensed pilot and speaks Spanish.

His nomination is pending confirmation by the Arizona Senate.

PHOENIX — The Arizona Game and Fish Commission proposes to amend rules within Article 3, Taking and Handling of Wildlife, to regulate the use of trail cameras for the purpose of taking or aiding in the take of wildlife.

Public comments about the proposed rulemaking can be submitted from Jan. 1 through Feb. 1, 2021, via either:

The final rule will be presented to the five-member commission for consideration at the March 19, 2021 commission meeting.

To track the progress of this rule, view the regulatory agenda and all previous Five-Year Review Reports, and to learn about any other agency rulemaking matters, visit https://www.azgfd.com/agency/rulemaking/. 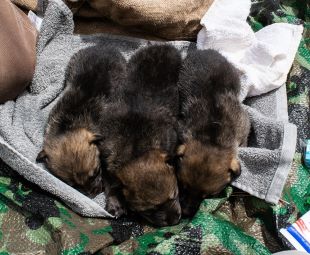 “We have documented survival in four out of the seven packs that received cross-fostered pups this year—and there could still be more. This is an extraordinary accomplishment by our field team,” said John Oakleaf, Mexican Wolf Field Projects Coordinator for the U.S. Fish and Wildlife Service. “The Service would once again like to thank the staff from the captive facilities, LightHawk, and the Interagency Field Team who continue to do incredible and visionary conservation work for the Mexican wolf.” 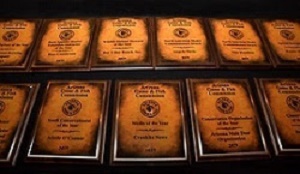 PHOENIX — The Arizona Game and Fish Commission Awards Banquet that is traditionally held in January has been rescheduled to Saturday, June 12, 2021.

The banquet will be held at the Pointe Hilton Tapatio Cliffs Resort, Grande Ballroom, 11111 N. 7th St. in Phoenix. More information will be posted and distributed as it becomes available.

Recipients of the 2020 Commission Awards who will be honored at this event are:

The first Commission Awards event was held in January 1991. Since then, more than 400 people have been recognized for their dedicated work toward securing Arizona’s wildlife for generations to come. 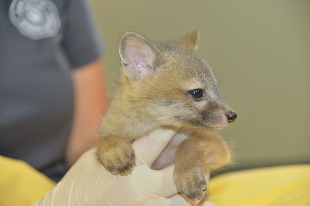 It’s a fun, easy way to raise money for the AZGFD Wildlife Center, where our staff care for sick, injured or abandoned wildlife. The Wildlife Center is also where the department’s educational Animal Ambassadors call home.

Here’s how the virtual Race for Wildlife works. First, you’ll register at https://www.virtualstrides.com/race-for-wildlife-virtual-run. The distance you’ll cover is 5K, and it can be run, walked, hopped, skipped, etc. It can also be done anywhere, including on a treadmill. If you don’t want to cover the distance all at once, just pick days and times that work for you and break it up over several days. You then report your cumulative time on the Virtual Strides web page. You must complete the distance and report your time by Dec. 16.

The registration fee is only $29 per person. Each participant will receive a beautiful 2-1/4-inch gold medal featuring the AZGFD logo and a digital race bib. The event is limited to 200 participants.

The virtual Race for Wildlife is part of the Virtual Strides Partners Program. The AZGFD Wildlife Center will receive 100% of the net proceeds from this event after Virtual Strides’ partner costs are deducted.

For more information about the Arizona Game and Fish Department, visit azgfd.com.