Flows fluctuate quickly in the stretch of the river.   Many anglers prefer not to navigate the river when less than three units are being released from Davis Dam.  Check the projected releases before your trip: https://www.usbr.gov/lc/region/g4000/hourly/DavisParkerSchedules.pdf.

Trout are stocked weekly by the USFWS Willow Beach National Fish Hatchery from October through March.  Additional trout will be stocked in April and May with funding from Bullhead Pest Abatement.  With an abundance of blackfly and caddisfly larvae available for the trout to feed off of, not only can you catch the recently stocked fish, but older holdover trout should be growing quickly here. Trout are stocked at Davis Camp, Community Park, and Rotary Park during the winter.  Many anglers prefer to fish for the holdover trout away from the stocking locations.

Striped bass can also be caught in the vicinity of the trout stockings.  Anglers will have a great opportunity to catch stripers throwing big baits.

As of the 19th of December, the lake level was at 1,065 feet. This is lower than it was the past few years.  During winter, stripers group up and go deep. The threadfin shad will be doing the same, so look for “balls” of shad on your graph and fish below them. Annual fish population surveys were done in October. Gillnetting and electro-fishing surveys showed many striped bass in the 1- to 3-pound range remain skinny.  Try slow trolling to locate the schools of striped bass.  Once you find them you can drop anchor and fish them.

Striper fishing can be really good from Davis Dam to Katherine’s Landing. It’s not uncommon for the bigger stripers to be down by the dam during the winter months. With the water level down, the shoreline fishing areas are up. Davis Dam has plenty of shoreline for numerous anglers to enjoy. Cabinsite and Telephone Cove also provide plenty of shoreline for fishing. As the water has cooled down both stripers and catfish can bite really well. Anchovies continue to be the most popular bait for stripers, but if you want to try something different, use shrimp or squid. 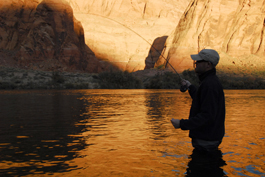 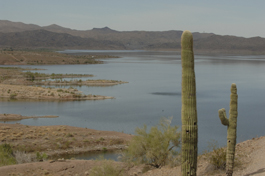 Lake level was 1,119 in mid-January. Bass fishing typically slows down in the winter. Water temperatures should increase from low 50s in early December to possibly the low 60s by the end of February, which means that slowing down any type of presentation is going to be key to winter fishing on Alamo. Using top-water baits or other reaction-style baits fished quickly may not be the best strategy for the winter months on Alamo. Instead, fish crankbaits or spinnerbaits slowly, or fish deeper and slower with plastics such as drop shot rigs. Fishing in or around cover for bass may be a winning strategy for bass on Alamo Lake. Channel catfish fishing should be decent throughout the winter. Just anchor near cover and use any of the prepared catfish baits as well as chicken livers or stink bait, or other baits like hot dogs or shrimp. Other fish such as bluegill, redear sunfish, tilapia and common carp are a lot of fun to catch. Many types of baits should work for these species.

Due to the lower water temps, the key to successful winter fishing in this desert lake is going to be fishing slowly. To catch largemouth bass, plastics may be the best option; some of the best plastic baits for Havasu are weightless Texas-rigged Ikas, Roboworms on a dropshot rig, or weightless Texas-rigged Senkos. Due to the cold temps, baits like top-water lures such as frogs or walk-the-dog type of baits, or reaction baits like spinnerbaits or crankbaits are not going to be quite as successful as during the warmer months, though it never hurts to have them rigged up just in case. For largemouths, it is generally best to fish around structure such as weedbeds, emergent vegetation, boat docks, or artificial habitat.

Early this winter, smallmouth bass were generally in deep water and sometimes to locate. As the winter progresses, smallmouths will generally move shallower in preparation for the spawn. Targeting smallmouth will generally require anglers to fish different locations than largemouths; it is usually best to fish rocky points, ridges, shorelines, or canyons.

Try your hand at striper fishing using your electronics to find schools of threadfin or gizzard shad. That will generally help you locate stripers, as these fish are the main forage for striped bass in Lake Havasu. Fishing on the bottom or trolling with live shad or cut anchovies should be a good bet.

The channel catfish population is generally underutilized by anglers. Due to low water temps, the fishing may not be great, but there are still opportunities to catch fish. Channel catfish can be caught using nightcrawlers, live bait, hot dogs, anchovies, chicken liver, stinkbait or about anything that “stinks.”

Bluegill and redear sunfish can be caught around structure such as docks, vegetation, or artificial structure using mealworms, nightcrawlers, flies or small crappie jigs.

The middle stretches should offer a multi-species bass fishing opportunity. Fishing for both species could be a little slow in early winter.

Largemouth bass fishing should be best in slackwater areas with aquatic vegetation such as bulrush or around boat docks. To catch largemouth bass this time of year, be sure to fish slowly. Plastics can be some of the best options, some of the best plastic baits are weightless Texas-rigged Ikas, Roboworms on a dropshot rig, or weightless Texas-rigged Senkos. Due to cold temps, baits like top-water lures such as frogs or walk-the-dog type of baits, or reaction baits like spinnerbaits or crankbaits are not going to be quite as successful as during the warmer months, though it never hurts to have them rigged up just in case.

Smallmouth bass fishing should be best near slackwater areas, rocky points or docks.  Many of the same baits and techniques used for largemouth bass will be effective for smallmouth bass as well.

Redear sunfish are most likely to be found around aquatic vegetation in slackwater areas. Redear will bite on meal worms, nightcrawlers, flies or small crappie jigs.

Fishing should be slow during the early part of the winter, but should pick up as the water temps increase in February. To target largemouth bass in the Imperial Division of the Colorado River, focus in the backwaters or near the mouth of the backwaters around structure such as weedbeds, emergent vegetation, tree stumps, brush, or boat docks. There are many different techniques used for largemouth bass, but as a general rule, due to the cool water in the winter, fishing slowly and using plastics will likely be the best strategy for winter fishing on the river, though it can’t hurt to have some rods rigged up with topwater lures such as frogs, buzzbaits, crankbaits, or swimbaits. Since the river warms up quicker than almost any other large water body in the state, start looking for bass to be spawning in some of the warmer and shallower backwaters starting in February.

Flathead catfishing fishing will likely be pretty slow during the winter, though the flathead catfish population of the Imperial Division continues to be healthy. Try fishing in slack water areas, deep holes, or near overhanging vegetation along the main channel of the river. Flatheads prefer live bait such as sunfish or small common carp. Channel catfish are in the main river channel and backwaters and will bite on nightcrawlers, hot dogs, chicken liver, stink bait, or about any other “smelly” bait. They can be caught year-round but probably bite best at night.

Mittry Lake can be a bit frustrating at times, especially for bass fishermen; the bass are sometimes finicky, especially in the early part of the winter. As a general rule, fishing slowly and using plastics should be a successful strategy, though it can’t hurt to have some rods rigged up with top-water lures such as frogs, buzzbaits, crankbaits, or swimbaits. Changing weather, including wind, sometimes brings on the bite.

There is a healthy population of catfish in Mittry Lake, though the cool water temps of winter could make for some slow fishing. Channel catfish are the most numerous, but there are also a number of flathead catfish. Channel catfish will bite on nightcrawlers, hot dogs, chicken liver or prepared stinkbait. Flatheads prefer live bait such as sunfish or small common carp. They are occasionally caught by bass fishermen on plastics, spinners and crankbaits.

Sunfish species are abundant in Mittry Lake. Bluegill and redear can be caught around structure such as docks, vegetation, or artificial structure using mealworms, nightcrawlers, or small crappie jigs.

The fishing in Yuma-area community fishing waters should be good this winter. Rainbow trout will be stocked monthly in community waters from December to February; fly anglers should try a bead head prince nymph or wooly bugger. Anglers can also throw lures such as spoons or spinners, and bait anglers should use garlic PowerBait in a variety of colors or nightcrawlers fished on the bottom.

To catch the remaining channel catfish, try nightcrawlers, anchovies, hot dogs, chicken liver or prepared stink baits fished on the bottom. Cheap hot dogs and shrimp were the best bait for channel catfish in the fall — they tended to outfish nightcrawlers, stink bait, or cut bait. There should at least be a few sunfish for anglers to catch throughout the winter. For bluegill, use mealworms, nightcrawlers, or small crappie jigs under a bobber.