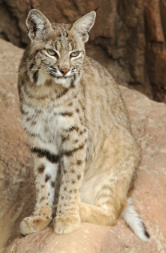 Bobcats, sometimes called wildcats, are roughly twice as big as the average housecat. Most bobcats are pale brown or brownish red but coloration can vary slightly in different regions. The chest, belly and inner side of their legs are white with black spots and bars on their legs and chest, and less noticeable spots throughout the body. Bobcats have long legs, large paws, a striped ruff of fur on their cheeks, and pointed ears with slight tufts of hair at the tips. These medium-sized cats are 2 to 3 feet long, including the tail, and weigh between 12 and 30 pounds, with females being smaller than males. The bobcat’s most distinguishing characteristic, however, is its short, bobbed tail, which has white fur on the underside and a black tip, and usually measures 4-8 inches long. This feature, coupled with the animal’s black spotting, can be used to distinguish bobcats from any other feline in Arizona, wild or domestic.

Bobcats are polygamous (have more than one mate) and do not form lasting pair bonds. They typically begin breeding at 2 years of age. They breed during winter and spring but may breed a second time, later in the year, if they lose a litter. Kittens are typically born during the spring and early summer months after a gestation period of 50 to 60 days. Females usually choose a secluded den, such as in a hollow tree, log, cave, or rocky crevice, to raise their litter of 2-4 kittens, and will often move their kittens around between multiple den sites. The same den site may be used for several years. As in most solitary cats, the female raises the kittens alone, nursing them for two months before teaching them to hunt on their own. Young usually remain with the female until the following spring. In more urban habitats, they have been known to den in backyards, using storage sheds, barns, planters, rooftops, and the spaces under buildings. 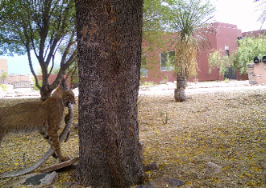 Bobcats are carnivorous and feed almost exclusively on meat. They tend to hunt and travel in areas of thick cover, relying on their keen eyesight and hearing for locating prey. Bobcats are patient hunters; they spend much of their time waiting, watching and listening. Once prey is located, a bobcat will stalk within range and ambush its quarry. Although their principal prey is cottontail rabbits and jackrabbits, bobcats also take small mammals such as mice, pack rats, and squirrels, birds, and occasionally larger mammals including the young of some big game species such as deer and pronghorn. Snakes and lizards are also part of the bobcat’s diet. They are also known to consume domestic animals, such as dogs, cats, sheep, goats, and poultry. 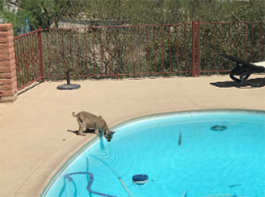 Despite decreasing habitat due to human development, bobcat populations remain stable. Although bobcats are elusive and tend to avoid people, it is not uncommon to observe them in some suburban areas, including Phoenix and Tucson. They may be attracted to a yard where food (bunnies, birds, poultry, small pets, etc.), water (pools, fountains, birdbaths, pets’ water dishes, etc.), and shade (patios, shrubs, etc.) are readily available.

Attacks on humans are extremely rare and tend to be associated with rabies. Bobcats with rabies tend to have erratic behavior, be lethargic and foam at the mouth. Bobcats can also act aggressively or attack if threatened or if kittens are nearby. It is always best to observe them from a safe distance and allow them an exit route.

Conflicts are more likely to involve pets and small domestic livestock (chickens, sheep, and goats), and can often be remedied by preventive methods. Small pets should be protected from bobcats and other predators. Keep small pets indoors, in an enclosed area with a roof, or on a leash when outside. Domestic birds should be kept in an enclosed area with a sturdy roof (a 6-foot tall fence is not necessarily good protection as bobcats are good jumpers and climbers), and do not spread seed that attracts other wildlife. Feeding bobcats, whether intentionally or inadvertently, can encourage them to become too comfortable around humans which may result in conflicts. The Department is committed to helping people learn how to behave responsibly and coexist safely in bobcat habitat.

Bobcats range across southern Canada, throughout most of the United States, and southern Mexico. They are the most broadly distributed field in North America. Though seldom seen because of their secretive nature, bobcats are very common and are broadly distributed throughout the state. In Arizona, they are particularly abundant in rugged and brushy habitats associated with Sonoran desert scrub and interior chaparral. Bobcats also can be found in suburban areas, including Phoenix and Tucson. Bobcats occur in large numbers across the continent. In fact, the U.S. population has been estimated to be between 2.3 and 3.6 million bobcats. In Arizona, the minimum density of adult resident bobcats in the central part of the state was estimated as 1 bobcat per 3.6-4.1 km2. This is one of the highest densities reported throughout their range. Other states with documented bobcat densities range from 1 bobcat per 2.1 km2 to 1 bobcat per 23.3 km2. Although bobcat density varies widely, it appears to be related to prey availability and abundance, and the population may respond to changes in prey abundance by increasing or decreasing home range size and reproductive potential. Analyses of annual harvest data, observation questionnaire data, prey abundance, “nuisance” complaints, and observations by field personnel continue to support previous research findings in Arizona that bobcat densities in the state remain high.

Although data on harvest levels can help inform managers about population trends, these numbers are influenced by hunting intensity which, in the case of bobcats, can be driven by international market values and interest by fur dealers. The Department uses data derived from annual harvest and observation questionnaires to evaluate long-term trends in harvest and observation rates which can serve as indicators of population change. The Department also requires successful bobcat trappers and anyone selling a bobcat pelt to purchase a numerically unique, non-reusable seal and submit harvest information for each seal purchased. This has allowed the Department to collect valuable data on bobcats resulting in a more accurate harvest assessment.

Additionally, trappers are required to submit jaws from bobcats harvested during the trapping season. Using teeth extracted from the jaws, the Department determines the age of the bobcat at harvest from the tooth cementum layers (similar to counting tree rings). This technique has been used successfully to age bobcats, and provides a valuable set of information about the bobcat population. Establishing an accurate age for harvested bobcats provides a mechanism for understanding bobcat population dynamics and the relationship between harvest rates and population demographics. Age at harvest and sex ratio information serve as population trend indicators to assess the status of the bobcat population and to guide management approaches. Collecting data on the method of harvest and game management unit where harvested also allows the Department to evaluate harvest distribution and density across the state. Enhancing understanding of harvest impacts on populations can lead to improved management strategies that provide opportunities for sustainable use while conserving populations.

The Department’s bobcat management goals are to maintain present range, distribution, and population levels in Arizona; and to allow for maximum recreational, economic, and aesthetic uses commensurate with existing populations statewide. Classified as both a predator and a furbearer by the Arizona Game and Fish Department, bobcats are hunted and trapped for their fur which can be highly valued on the international fur market. However, state and federal oversight has been established to maintain long-term viable populations. In Arizona, bobcats can be hunted from August 1 through March 31 with a valid hunting license and may be trapped from November 1 through the end of February with a valid trapping license. Trappers are required to submit an annual report.

Hunters report taking about 2,000 bobcats a year. Most of these are taken by hunters pursuing other game or by predator calling. In the late 1970s and early 1980s, when bobcat prices were high and foothold traps could be used on public land, Arizona trappers caught and exported roughly 6,000 bobcats a year, with a high in 1980 of over 9,500. This number has fallen substantially due to the law making foothold traps unlawful on public land and the decrease in the value of a bobcat pelt. Today, trappers typically report taking less than 1,000 bobcats annually.