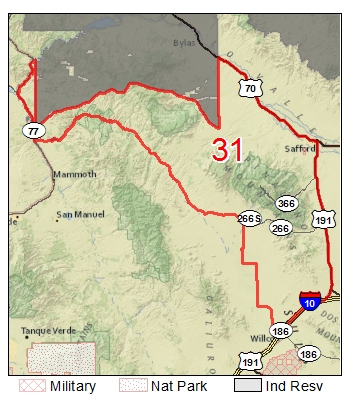 Beginning at Willcox Exit 340 on I-10; north on the Willcox-Bonita-Klondyke road to the junction with Aravaipa Creek; west along Aravaipa Creek to AZ Hwy 77; northerly along AZ Hwy 77 to the Gila River; northeast along the Gila River to the San Carlos Indian Reservation boundary; south then east and north along the reservation boundary to U.S. Hwy 70; southeast on U.S. Hwy 70 to U.S. Hwy 191; south on U.S. Hwy 191 to the 352 exit on I-10; southwest on I-10 to Exit 340.

Overview: Bears are found in all drainages of the Pinaleno Mountains. The bears will be found mid-range on all sides of the mountain and a little higher on the south side. Hunting conditions are tough as the terrain is steep, rough, with heavy vegetative cover and very limited access from the bottom of the mountain complex.

Recommended hunt locations are more dependent on the hunter’s limitations, physical abilities bear hunting skills and hunting style than on bear use areas. Efforts should not be concentrated entirely to the prickly pear regions of the unit; generally the prickly pear fruit is gone before this season opens. Explore the upper reaches of the mountain complex drainages. A US Forest Service map and topographic maps would be useful to those hunters headed for the more remote areas. Trails are not generally well maintained or marked.

Areas: A very serious bear hunter should hunt from the bottom of the mountain, end of access, to the middle reaches. This will be physically demanding with high daily temperatures and should only be attempted by the more experienced hunters.

Inexperienced hunters should hunt from the top of the mountain along the Swift Trail (366) where the chance of success will only be slightly decreased and weather conditions greatly improved. Usual hunting style is to find a vantage point and use a quality optic to glass the area during the early morning and late evening hours. The middle of the day should be used for finding new areas that might be productive.

Overview: The Department implemented Elk hunting seasons in Unit 31.  Elk hunting in this Unit can be extremely difficult due to the terrain; the areas they frequent and they can be very mobile. For the fall hunting seasons a few permits are offered in September and October and Over the  counter tags are available in late November and December for Units 28-31-32.

Areas: Areas where Elk have been observed are but are not limited to:

O/O Ranch (Bonita): Take SR 266 west towards Ft. Grant State Prison, just past the Forest boundary on the south side of 266 the department has installed a Landowner sign-in station to access the area across private property.

Mt. Graham complex (Pinaleno’s): Elk have been observed on top of the mountain complex near Riggs Flat Lake. This area offers limited visibility and the terrain can be very rugged. Also, from November 15th to April 15th of each year the road closes to vehicular traffic at the end of the pavement near Shannon campground.

Pre-season scouting and obtaining a USFS map of the area will be very beneficial in efforts to hunt Elk in Unit 31.

Access in Game Management Unit 31 has decline since the 2004 hunting seasons. Several areas that were accessible in the past have closed to public entry. It is highly recommended that you visit areas that you may want to hunt before the seasons open.

Overview: Javelina numbers in Unit 31 remained stable over the past few years. Javelina hunting should be fair this season. Permit numbers have remained constant for several  hunting seasons. Permit numbers will remain the same and be distributed between the fall and spring hunting seasons. Hunting efforts should be concentrated along ridgelines and drainages that contain prickly pear cactus and shrubs that javelina utilize for food and moisture. A quality pair of optics is very important for javelina hunting, since these animals seem to appear out of nowhere because of their size and coloration. Pre-season scouting will greatly improve odds of having a successful hunt in the upcoming season.

Areas: S. Pinaleno’s South of SR. 266 – Hunt the lower drainages and ridges in the Dyl Canyon, O-Bar-O and Oak Draw Round Mountain area.

Santa Teresa Mountains and Aravaipa Canyon – At the present time access is very limited in these areas. Forest Service road #94 and the Sand Tank road and the ET Ranch are the only points available. It would beneficial to scout these locations prior to the hunt.

Overview: Deer numbers are fair with pre-scouting being highly recommended for a successful hunt. Mule deer are not found in the timber and high elevations of the Pinaleno Mountains along Hwy 366. Greasewood Mtn located in the Southern Pinaleno’s between Willcox and SR. 266 (Stockton Pass Rd.) is a recommended area. Some deer are concentrated around the apple orchards south of Bonita and on the flats leading to the mountainous areas along Hwy 191. The lower elevations between Bonita and the Aravaipa area are also popular mule-deer hunting localities.

Areas: Southern Pinaleno’s (Greasewood Mtn.) Hunt in lower elevations around mountain complex. Access into this area can be obtained from SR 191 and the gasline road that travels north from I-10. The O-Bar- O canyon and Bar X canyon areas are accessed from SR 266 through the O-Bar-O Ranch where the Department has a Sportsman Landowner sign in box, you must sign in before entering the area. These areas along the foothills and lower elevations would be places to begin.

Pre-season scouting and a good pair of binoculars are very important when hunting mule deer in Unit 31.

Durkee and Battle Mountain Area: Take Bonita-Klondyke road northwest to FS 672 road. Follow this road to foothills and hunt the drainages and bottoms that run north and south from Mt. Graham.

Lower Tripp Canyon and Bear Springs: There are two ways to access these areas. Take Tripp Canyon road out of Pima from SR 70. This is also FS road 286. Follow FS 286 to intersect FS 351. Hunt the lower drainage and elevations. Or follow SR 70 to Klondyke road approximately 5 miles west of Pima. Follow Klondyke road t FS 351. This will access the same area as above.

Overview: These deer are found throughout the mountainous areas of the unit and in the lower elevations north of the Aravaipa Canyon and NE of Klondyke. The rough, limited access areas of the Santa Teresa’s Mts. and Pinaleno Mts. offer some remote hunting opportunities. Early season hunting is possible in the cool timbered areas along Hwy. 366 (Swift Trail) for those hunter skilled in hunting the timber types. This area is very steep and the 8000’+ elevation makes hiking difficult but provides a lightly hunted deer resource. Still-hunting and glassing are the most successful hunting techniques for all units.

Areas:
Tripp Canyon – Take SR 70 to west of Safford between Pima and Ft. Thomas. Go southwest on Klondyke road to FS 351, follow FS 351 and hunt side canyons and upper reaches.

The Eureka Springs Ranch was sold and several new roads have been placed throughout the ranch. Several of these roads are located on private property and are not accessible to the public. If you have hunted this area in the past it is recommended to do some pre-season scouting.

Klondyke Area – Take SR 70 to Klondyke road between Pima and Ft. Thomas. Follow to intersection of Bonita road. Go North towards Aravaipa Canyon Area. Access changes from year to year. If you plan to hunt these areas it is recommended that you visit the area prior to you hunt opening.

Pre-season scouting and good pair of optics are essential to success when hunting whitetail. Also, obtaining a Coronado National Forest map for the Safford district would be very beneficial. This map will provide you with access points and land status throughout the Unit.

Overview: The early dove season is generally slow in Unit 31. Late summer storms usually move white-winged doves south before the opening day. Most dove hunting that occurs in this unit is around the desert stock tanks.

Areas: There are a few agricultural fields located in the Gila Valley, south of Hwy 70 and west of Pima and Ft. Thomas that occasionally provide hunting over harvested fields but the only consistent dove use areas are in association with desert stock tanks and mesquite trees. These sites vary in location with summer rains etc. and pre-hunt scouting is a definite pre-requisite to a successful hunt.

Bonita Valley: Areas West of S.R. 191 and North of I-10 where stock water and mesquite bosques are located. During the early season dove hunting will be best in the early morning. Late season hunting early a.m. and late p.m. around desert stock tanks and Mesquite bosques. Black Rock Wash, SW of Ft. Thomas adjacent to the San Carlos Reservation.

Overview: Quail hunting in Unit 31 will probably be better this year due to the moisture and habitat condition. Both Scaled and Gambels quail are found in the unit. Watch the winter precipitation for an idea of what the following season will look like. Years with high winter precipitation will have higher quail numbers the following year. Hopefully next year’s numbers will be higher.

Areas: Areas to hunt will include but not limited to:

Greasewood Mountains: Take I-10 East to SR 191. Follow 191 North. Take roads off 191 that go west into lower drainages. Any areas in lower elevations around Greasewood Mountains should be fair for quail hunting. Numerous stock waters are located throughout the area. Access is not limited in this area except on the SW side from Willcox.

Overview:  Turkeys were reintroduced into Unit 31 by the Department several years ago. The population has increased to the point that a hunt is possible. Hunters and visitors to Unit 31 are seeing birds and hunt success rates are high.

Areas: Areas to hunt will include but not limited to:

Pinaleno Mts: Take Hwy 366 from Hwy 191 south of Safford. This highway is known as the Swift Trail. Travel along Swift Trail to the higher elevations. Some of the areas to look for turkeys would be Lady Bug Saddle, Snow Flat, Hospital Flat, Treasure Park, Peters Flat and Chesley Flat.

Stockton Pass: The area along Hwy 266 between Hwy 191 and Ft Grant can hold birds. Grant Creek behind the State prison at Ft. Grant is one of the original release sites and turkeys can be found in Grant Creek. The road along Grant Creek can be very rough and some hiking may be required.

Other Pertinent Climate Information
Winter snowpack at highest elevations of the Pinaleno Mountains averages 8′ to 12′ between January and March. At lower elevations, annual snowfall averages 1.3″ based on a 30-year average. Due to the unit’s wide range of elevations, precipitation and temperatures often vary greatly from one location to another.

Major Cities and Towns in or Near Game Management Unit and Nearest Gas, Food, and Lodging
Safford, Willcox

Camping is allowed on Bureau of Land Management and Forest Service lands throughout the unit.

Terrain varies from the gradually sloping valleys of the Gila River to the steep, rocky slopes and rugged canyons of the Pinaleno and Santa Teresa mountains. Elevations range from 2,800′ in the Gila valley to 10,700′ on the Pinalenos. Vegetation consists of semi-desert grassland at lower elevations and coniferous forest at the higher.