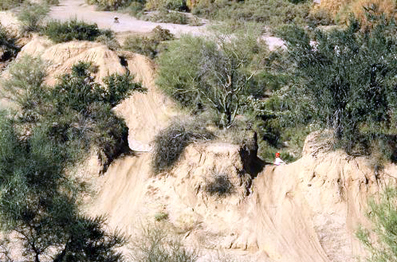 Habitat varies from species to species, but it encompasses all of the needs of that species. It is the total environment upon which a species depends. There are four basic elements: food, water, shelter and adequate space. Also included is the arrangement of the basic elements to one another. Each species must have all the basic elements in the necessary order to survive.

A resource that is sometimes overlooked and that is difficult to quantify is “solitude” (or lack of disturbance). Many species of wildlife have negative (flight or fight) reactions to approaching noises, including OHVs.

You can minimize impacts on wildlife by staying on designated roads and trails or in special-use areas. Wildlife will avoid or adapt to trail corridors.

When you see wildlife, stop and enjoy its presence. Go around them or wait for them to move. Never chase wildlife.

The survival of animals is often precarious and disturbances by humans can result in death. Animals survive winter by creating fat reserves and limiting activity to conserve energy. Fat is needed to sustain body temperature in the extreme cold. Since plants are dormant and maintain low nutritional value during the winter, creation of sufficient energy reserves during the summer is critical. OHVs can destroy the plants animals need to create fat reserves. Turning a meadow into a mud bog reduces forage resulting in higher mortality for wildlife.

Vegetation also reduces erosion by increasing the stability of the soil. If the plant cover is destroyed the soil can be eroded by wind and rain.

Impacts to soils are acceptable if managed and confined to trail corridors. For the land manager, this carries the responsibility of doing a good job of locating, designing, constructing and maintaining trails. For users, it means staying on designated trails or in designated areas.

Streams and their banks are exceptionally fragile. Traveling along banks or through stream beds causes stream sedimentation. Stream sedimentation is the process where the stream fills with silt, soil and gravel (sediment) and slowly fills in shallow pools. The water may still pass through the sediment but not at the surface. The pools that once contained fish and other aquatic species become nothing but moist sand.

Take extra precautions where trails ford streams. Go directly from an established trail to the trail on the opposite bank. Avoid spinning tires or losing control.

The promotion of safe operation of OHVs and emphasizing protection of environmental resources can be found in the Tread Lightly! program. Tread Lightly! was begun by the U.S. Forest Service in 1986 and became a nonprofit corporation called Tread Lightly! INC. in 1990. Its message is responsible use of public and private lands.

The principals of the Tread Lightly! program are summarized with the word TREAD.
T Travel only on designated routes.
R Respect the rights of others.
E Educate yourself.
A Avoid sensitive areas and wildlife.
D Drive responsibly.

There are numerous opportunities for OHV recreation in Arizona depending on what you are looking for. Local land management agencies usually have information and maps available.